The nation’s flagship military hospital has developed an effective lung cancer screening program for the Department of Defense.
Get a PDF version of this Case Study
Download 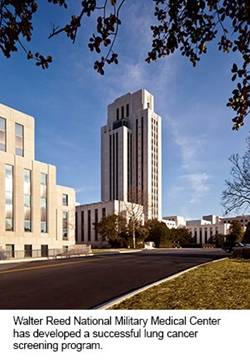 For decades, the U.S. military included cigarettes in its rations—ready-to-eat meals issued to service members in the field. With access to these free cigarettes, military personnel in stressful combat situations often smoked. Recognizing the adverse health effects associated with smoking, the military pulled cigarettes from its rations in 1975. But with inexpensive cigarettes widely available overseas and stress a constant factor, service members continue to take up smoking at a higher rate than the general population.1 As a result, military service members and veterans may be at a greater risk of developing lung cancer than their civilian counterparts.

In 2012, radiologists at Walter Reed National Military Medical Center (WRNMMC) in Bethesda, Md., took action to address the issue and improve patient care by working with a multidisciplinary team to develop a lung cancer screening program for military service members, veterans, and other beneficiaries. The program follows the success of the radiology team’s CT colonoscopy screening program, which has provided more than 20,000 exams since its inception in 2004. Inspired by the National Lung Screening Trial (NLST), a decade-long study that showed a 20 percent reduction in lung cancer mortality with low-dose CT2, WRNMMC’s lung cancer screening program has had a lung cancer detection rate of more than 5 percent. “We suspect that we have a high-risk population, and we’re slowly discovering that is indeed the case,” says Cmdr. Elena Prezioso, director of the lung cancer screening program and physician assistant in pulmonary medicine at WRNMMC. “We’re saving lives through this program.”

Before WRNMMC established its lung cancer screening program, patients who did not have symptoms of lung cancer or another abnormality that required a chest CT were not routinely screened. Therefore, the chance of detecting a patient’s lung cancer early was relatively low. With the program, primary care physicians and other providers can refer patients who meet certain criteria for routine low-dose CT screening and coordinated follow-up care. Patients can also self-refer to the program in much the same way that women self-refer for mammography screening. “If we find a tumor, we can deal with it at an early stage and have curative intent,” Prezioso says. “That makes a big difference in a patient’s life.”

WRNMMC began developing its lung cancer screening program after the NLST results were released in 2011. A multidisciplinary team, including physicians from radiology, oncology, pulmonary medicine, primary care, and preventative medicine, led the effort. “We had a group of people who had already worked together on tumor boards and on other lung cancer–related programs, so lung cancer screening was a natural outgrowth of that group,” says Cmdr. Joel A. Nations, MD, chief of medicine and a pulmonary and critical care physician at WRNMMC. The hospital’s leadership supported the team. “Our leadership wanted us to pioneer the screening program at our hospital and set a standard for other military treatment facilities,” explains Cmdr. Robert Liotta, MD, deputy director for clinical support and a cardiothoracic radiologist at WRNMMC. 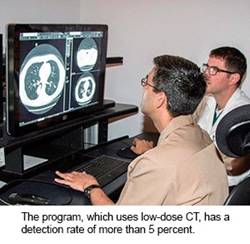 Once the patient criteria were determined, WRNMMC’s radiology department developed a schedule and ordering process for the CT screenings. It designated Tuesdays as lung cancer screening days and created a special order form for the program. “We created a new order in the computer that would pop up in our radiology information system, so we would know that the order was for the lung cancer screening program, and we would know how to protocol it appropriately,” Liotta explains. The radiologists also developed a new dictation template to ensure that they dictate their lung cancer screening reports consistently. “By doing that, the patient gets continuity of care and the referring physician knows exactly where to look on the report for specific information,” Prezioso notes.

Focus on the Patient

While low-dose CT is at the heart of the lung cancer screening program, WRNMMC’s radiology team wanted to do more than simply scan patients and send them on their way. To ensure patients get the most out of the program, the radiology team adjusted its workflow to provide preliminary reads of the screening studies. Prezioso discusses these initial results with patients before they leave the hospital, and final reads are issued soon thereafter. “We recognize that patients want their imaging results as quickly as possible,” Prezioso says. “Radiology stands by to give initial reads so that patients can go home with preliminary results and some peace of mind. It’s part of our commitment to patient-centered care.” Patients whose CT scans reveal incidental findings can see a pulmonologist that day.

Another way the lung cancer screening team engages patients in the program is through direct communication. When a patient is due or overdue for a follow-up scan, Prezioso calls him or her to discuss scheduling an appointment. “We didn’t want people just getting a chest CT and then not being followed up,” Liotta says. “So we actually have a system in place where our program is reaching out to patients and encouraging them to come in for their follow–up exams.” While Prezioso has been making these calls, the radiology department will take over this outreach effort soon. “We’re looking at having a radiology nurse or one of our clinic nurses help run the program,” Liotta explains. “Doing so will raise radiology’s profile because patients will receive calls directly from our department.” 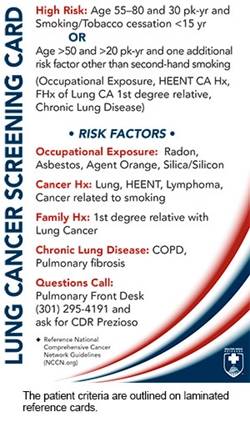 As WRNMMC prepared to roll out its screening program in November of 2012, in coordination with Lung Cancer Awareness Month, it began educating referring physicians about the program. As part of these efforts, Prezioso visits referring physicians’ offices to talk to them about the screening program. During these visits, she distributes pocket-sized laminated cards that outline the program’s patient criteria. She also hands out provider intake formsto help referring physicians determine whether patients qualify for the program. “We want to make sure we’re sticking with the criteria and not just screening willy-nilly,” Prezioso explains. “The idea is to do the greatest good for the largest number of patients possible, with the least harm.”

The lung cancer screening team also markets the program through promotional videos, direct-to-patient outreach efforts, and informational events. One video the team produced to encourage referring physicians to talk to their patients about the program has been distributed throughout the Military Health System. The team also created a webpage where patients can access information about the program, along with a questionnaire to help them determine whether they should enroll in the program. Additionally, the lung cancer screening team hosts two annual events, one a CME event, that include informational booths and lectures about lung cancer awareness, prevention, screening, and research. The events attract hundreds of referring physicians, medical staff, and patients.

These marketing and outreach efforts have paid off. Currently, more than 260 patients are enrolled for screening and 14 patients have been diagnosed with lung cancer through the program, with about half of those cases being early stage. The team is currently enrolling about six new patients per month. Maj. Christina Brzezniak, DO, assistant service chief of hematology and oncology, says that the program improves patient care and reduces health care costs. “When we detect lung cancer early, we can avoid having to subject patients to systematic chemotherapy,” Brzezniak says. “That is huge from both a cost standpoint and a patient care perspective. If we can avoid exposing patients to the toxicities associated with chemotherapy, then we’ve done them a tremendous service.”