Radiologists and referring physicians collaborate to create standardized guidelines for consistently managing incidental findings uncovered through a lung cancer screening program.
Get a PDF version of this Case Study
Download 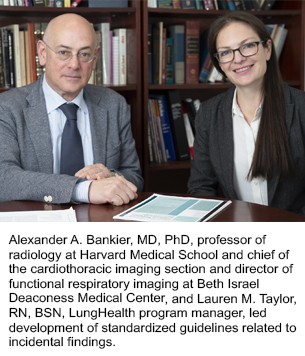 The main goal of LungHealth®, the low-dose CT (LDCT) lung cancer screening program that Beth Israel Deaconess Medical Center (BIDMC) launched in 2016, is to detect lung cancer early and improve survival rates among high-risk patients. But radiologists are uncovering more than lung nodules through the program; they are also detecting a lot of incidental findings. Now, program leaders are standardizing how they handle these findings, expanding LungHealth beyond lung cancer detection for more holistic patient care.

“In the past, radiologists weren’t always sure what to do about incidental findings,” says Lauren M. Taylor, RN, BSN, LungHealth program manager. “We really didn’t have any framework around what exactly makes up an incidental finding in the context of lung cancer screening or how to determine what type of follow-up care to recommend.” (Read “A Proactive Role for Radiology” to learn more about BIDMC’s LungHealth program.)

As an ACR-designated lung cancer screening center, LungHealth uses ACR’s Lung-RADSTM  guidelines to consistently assess and report lung nodules using a standardized reporting template. But to create a standardized protocol for incidental findings  found through LDCT screening, program leaders had to work closely with referring physicians and other specialists.

To that end, Taylor and LungHealth’s medical director, Alexander A. Bankier, MD, PhD, met with specialty departments throughout the hospital and asked for their input. Specifically, they asked the specialists what findings within the framework of lung cancer screening and in light of a patient’s specific risk profile should require follow-up or additional testing. They also asked what the recommended next steps should be for each potential finding.

From there, Taylor and Bankier created a list of all of the different possible findings, correlated to each specialty’s recommended next steps. Then, they asked an independent group of referring physicians across the hospital to audit the list until everyone agreed with how the recommendations were presented. “It was a strenuous process,” Taylor says. “It has to be fairly extensive, because it touches on every possible incidental finding you could see for each section of the body.”

“Now, when our radiologists read a lung cancer screening exam and see a renal cyst of a certain size, for example, they can look it up and find a direct recommendation based on what they’re seeing,” Taylor says. “The recommendation is then directly inserted into the report. This way, all incidental findings and their potential management recommendations are reported in a standardized manner across the board.”

Just a couple weeks after implementing the new guidelines, Taylor says the benefits are already obvious. “We’ve received positive feedback from referring physicians who like receiving direct recommendations for incidental findings. Having guidelines in place to determine the next steps after a scan is very helpful to them and valuable for patient care,” she says. “For our radiologists, it removes the gray area around incidental findings. Now, their recommendations are very clear, reproducible, and consistent.”

Breathe Easier by American College of Radiology is licensed under a Creative Commons Attribution-NonCommercial-NoDerivatives 4.0 International License. Based on a work at www.acr.org/imaging3. Permissions beyond the scope of this license may be available at www.acr.org/Legal .