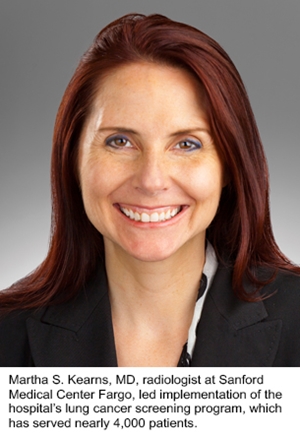 When radiologists at Sanford Medical Center in Fargo, N.D., heard about their hospital’s plan to offer low-dose CT (LDCT) lung cancer screening for high-risk patients in 2012, they were a bit apprehensive. The radiologists knew that lung cancer screening would require a great deal of coordination and were concerned about the time and complexity associated with monitoring patients who enrolled in the program.

“We recognized the immense potential of screening to identify lung cancer in the early stages, when it’s most treatable. But without the right follow-up procedures in place to make sure no one fell through the cracks, we thought we’d actually be doing our patients a disservice,” says Martha S. Kearns, MD, radiologist at Sanford Medical Center Fargo.

Now, with a dedicated nurse navigator, the team manages patient exams, results communication, and follow-up, with radiologists providing clear and consistent recommendations based on custom guidelines that the radiologists founded in part on the ACR LUNG-RADS® reporting system. (Read more about how recommendations were developed for the team’s lung nodule clinic.) With this approach, Sanford’s lung cancer screening program has grown significantly over the years.

Since the program began in 2013 — with a hiatus in 2015 for proposed Medicare changes — over 300 different providers throughout the region have referred more than 3,900 patients for lung cancer screening. Among these patients, the radiologists have identified 44 cases of cancer, 24 of which were detected in stages 1 and 2, when the disease is still treatable.

“Working closely with family physicians and other key specialists, we’ve been able to detect lung cancer early, before symptoms even appear,” Kearns explains. “Lung cancer screening is part of our role as radiologists now, and it saves lives.”

The idea to start a lung cancer screening program at Sanford Medical Center began during a 2012 lung care oversight committee meeting, when administrators asked physicians an important question: What can our cancer center do to elevate its performance? Radiation oncologists and oncologists at Sanford’s Roger Maris Cancer Center noted an uptick in the number of lung cancer patients they were seeing and suggested that lung cancer screening could help detect cancer cases sooner, while also bringing more patients to the center.

They pointed to the National Lung Screening Trial (NLST) , which found that patients who underwent annual LDCT screening had a 20 percent lower lung cancer mortality rate compared to those screened with chest X-rays.1 One of Sanford Fargo’s sister locations in Sioux Falls, S.D., had recently launched its own lung cancer screening program. “We knew that if we were going to keep up with other health systems and better serve patients, we had to start our own screening program,” says Sharri M. Lacher, APRN, who eventually became the program’s lung nodule nurse navigator.

As the lung care committee considered starting a lung cancer screening program, members evaluated Sanford’s existing CT technology for LDCT calibration and agreed that patients would need a referral from their PCPs to enroll in the program. They also decided on both the eligibility requirements and a self-pay fee of $150 for patients, since lung cancer screening had not yet been approved for insurance reimbursement. 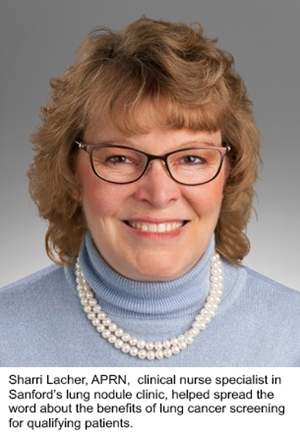 The team’s use of existing CT equipment and exam space kept the program’s operating costs low. Given the program’s minimal overhead — and high potential for patient benefit — hospital administrators wholeheartedly endorsed launching the screening program for high-risk patients in March of 2013.

Referrer involvement was critical to generating a steady volume of eligible screening patients. Unfortunately, many PCPs and other family physicians did not understand the significance of the landmark NLST or the potential benefits of lung cancer screening for high-risk populations. To overcome this, Sanford specialists partnered with Lacher to educate referrers across the region about screening and to encourage them to enroll patients in the program.

Lacher planned monthly lunch and learns for physicians and nurses. During the events, Lacher and physicians from radiation oncology and oncology emphasized the importance of documenting patients’ smoking histories to identify probable screening candidates and encouraged referring physicians to inform patients about the benefits of and need for LDCT screening: It helps detect lung cancer early, when it’s still treatable and is recommended for as many as 15 years after a patient quits smoking. Sanford also integrated a flagging system for LCS eligibility within the electronic medical record (EMR) so physicians could more easily identify high-risk patients.

The lunch and learns also gave referring physicians an opportunity to ask questions and voice their concerns. Some referring physicians worried that the radiologists wanted to commandeer their patients. But Kearns and Lacher assured them that the goal was to work collaboratively to provide this enhanced patient care. “We were really saying to them ‘Let us help you help your patients; let us help you do your job better and make sure your patients get the care they need,’” Kearns explains. “We assured them we weren’t trying to steal their patients.”

The outreach educated referring physicians about the benefits of lung cancer screening. “We understood that if a patient had at least a 25-year smoking history, we’d send them for screening to catch nodules earlier and potentially save lives,” says David Glatt, MD, chair of the department of family medicine at Sanford Health.

Still, many PCPs felt ill-equipped to manage the increasing volume of lung nodule patients that screening would identify. “We were worried we were going to lose patients to follow-up,” Glatt explains. “As far as we were concerned, radiologists and pulmonologists were the nodule experts and had a much better understanding for where the patients should go next.”

Radiologists, who had similar concerns about patient follow-up, committed to monitoring patients through the continuum of care as part of the lung nodule clinic. “If patients had abnormalities, like a lung mass, we agreed to help primary care triage them to pulmonology or interventional radiology or send them for subsequent CTs — wherever the patients needed to go,” Kearns says. “We became a safety net to make sure the patients were being taken care of, so the primary physicians had one less thing to worry about.”

While the self-pay model brought in a moderate but steady stream of over 200 patients in 2014, 2015 was a different story. In February of that year, CMS announced a national coverage determination for Medicare beneficiaries who meet certain eligibility criteria.3 The decision also outlined specific dose parameters, standardized reporting requirements, and other conditions for reading radiologists and participating imaging facilities. Sanford’s screening program — like other lung cancer screening programs nationwide — was suspended until it met the new requirements and CMS finalized its reimbursement codes. 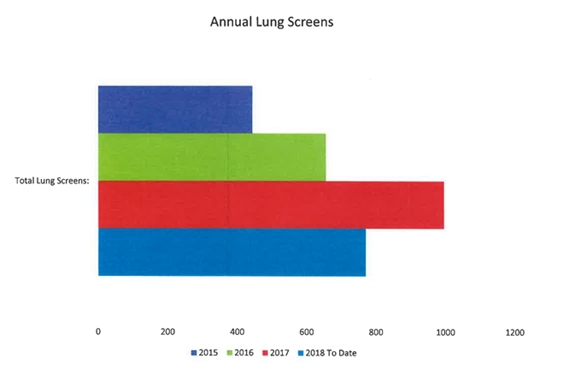 From there, Sanford began implementing new processes to meet the CMS requirements for lung cancer screening, including the institution of dose reduction techniques as part of the ACR Lung Cancer Screening Registry (LCSR)  and patient flow improvements within the lung nodule clinic. The on-staff radiologist would interpret the CT, share the standardized report with both the PCP — who would deliver the results to the patient — and Lacher, who, as the nurse navigator, would monitor the patient to ensure care continuation for subsequent scans.

According to Glatt, this coordinated care delivery has been vital to the screening program’s success. “Centralizing the complex, multidisciplinary process of CT screening and subsequent lung nodule management into a clinic has enabled Sanford to provide true accountability and the highest level of patient care for thousands of patients.”

The referrer education outreach efforts along with integration of LCS eligibility within the EMR spurred a significant increase in the program’s patient volume. After Medicare reimbursement for lung cancer screening was approved in late 2015, the year brought 466 patients into the program, followed by 681 patients in 2016.

As the program gained momentum, Lacher and Kearns began helping rural Sanford sites in the region adjust screening processes to meet Medicare’s requirements for a covered LDCT program and participation in the ACR LCSR. “I’ve met with various leaders of rural clinics to discuss what we’ve implemented here at Sanford and to help guide them in offering screening and follow-up access for high-risk patients in rural areas,” Kearns says.

Sanford Medical Center’s lung cancer screening volumes have continued to increase with its expanding presence in the region and within referrers’ offices, with 1,211 high-risk patients undergoing screening in 2018. Over the duration of the program, numerous lung cancers — 24 of them early stage — as well as additional cancers, were identified in 44 patients, increasing their chances of survival via various treatments.

For 2019, the Sanford lung nodule clinic has set a new goal: a 20 percent increase in scans to induce earlier nodule detection and successful treatment for at-risk patients. Lacher believes that into the next decade the lung cancer screening program could grow through the use of videoconferencing and/or even a mobile screening unit to service additional areas.

Kearns says that the program’s success can be attributed in part to radiology’s consistency in process, open-mindedness about applications, and a willingness to be hands-on in a way that demonstrates the specialty’s value. “Lung cancer isn’t going away,” she says. “As radiologists, it is our job to find it early, so we can reduce mortality, and lung cancer screening is the best way for us to do that.”

Lung Screening Solutions by American College of Radiology is licensed under a Creative Commons Attribution-NonCommercial-NoDerivatives 4.0 International License. Based on a work at www.acr.org/imaging3 . Permissions beyond the scope of this license may be available at www.acr.org/Legal .