Indiana radiologists work alongside care partners to create a successful lung cancer screening program that addresses a population health need.
Get a PDF version of this Case Study
Download 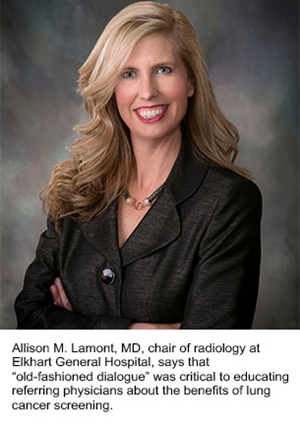 According to the Centers for Disease Control and Prevention, 25.6% of Indiana residents smoked in 2011, and the state ranked fifth in the nation for number of smokers. In the northern Indiana city of Elkhart alone, smoking was so prevalent that many residents identified it as a top concern in a 2011-2012 community health assessment. These findings prompted radiologists and other providers at Elkhart General Hospital (EGH) to consider the dangerous effects of smoking on their community and act to address them.

One of the most obvious impacts of smoking is a high mortality rate. Lung cancer is a leading cause of cancer deaths in the U.S.1, and research indicates that identifying high-risk patients and screening them for cancer with low-dose computed tomography (LDCT) can reduce lung cancer mortality by up to 20% among smokers.2

Unfortunately, though, most at-risk patients do not undergo regular screening, and many patients go undiagnosed until symptoms arise in the later stages of the disease. By that point, the chances of effectively treating the disease are low. The five-year survival rate for patients with early-stage lung cancer can be as high as 90%, while the late-stage survival rate is only 5%. Hoping to give its patients a better chance of survival, EGH partnered with its existing smoking cessation group to establish a lung cancer screening program six years ago.

Since then, the program has undergone many changes, but most importantly, it is getting results: EGH radiologists have diagnosed more patients with early-stage lung cancer than they did before implementing the program. Of those diagnosed through the program, more than 50% had Stage 1 lung cancer. “It is critical to detect lung cancer early, before patients become symptomatic,” says Allison M. Lamont, MD, chair of radiology at EGH. “If patients become symptomatic, it is often too late. This is a life-saving program.”

EGH’s lung cancer screening program began taking shape in 2012, after the hospital secured a CT scanner for the program. An oncology nurse proposed establishing the screening program during a quarterly meeting of the hospital’s cancer committee, which includes representatives from the departments involved in oncology care. The radiologists, cardiologists, and pulmonologists in attendance immediately supported the idea — recognizing that it would address an urgent population health need.

“As a radiology department, we are committed to offering new services that will improve patient health,” explains Albert W. Cho, MD, vice chair of radiology at EGH. “We had been interested in developing a lung cancer screening program for a while to address this public health crisis. Once we had a scanner available and buy-in from other departments, we saw an opportunity to help drive the implementation.”

To start, the radiologists met with specialty partners, administrative staff, and care coordinators to construct a framework for the program. “One of the most exciting aspects of this program has been working with the other specialties and with hospital administrators,” Cho says. “There is often a view that specialties, particularly radiology, are independent and operate on their own, but working together has so many benefits, such as increased camaraderie throughout the hospital and enhanced dialogue among specialties to better serve patients. It’s very rewarding.”

One of the first things the team had to define was eligibility criteria for lung cancer screening patients. The Centers for Medicare and Medicaid Services (CMS) had not yet issued guidelines for reimbursement of lung cancer screening, so the Elkhart team decided to follow the National Comprehensive Cancer Network’s screening guidelines, which state that high-risk eligible patients are between 50 and 74 years old with a history of smoking at least 1.5 packs of cigarettes per day for 20 years or more. 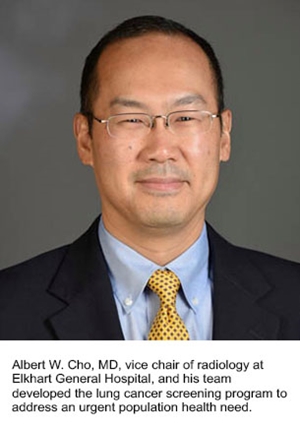 From there, the team focused on the program’s business case. Since CMS did not yet cover lung cancer screening, the team had to determine how much to charge for the service. They needed to cover the program costs without pricing out patients, particularly low-income patients. “We wanted to market this as something that patients would value and find important, while giving them some perspective on the cost of care,” Lamont explains.

The team ultimately decided to charge $199 out of pocket — the rough equivalent to one and a half packs of cigarettes per day for a month, which they advertised to help patients understand the value of this potentially life-saving service. While the price would just cover the program costs, the team determined that the potentially life-saving benefits were more important, and they remained steadfast in their desire to not financially overburden patients.

“We helped others understand the criteria and the things that had to be calculated for the program to work, such as the scheduling processes and patient flow between the radiologists and the nurse practitioner in charge of follow-up,” says William T. Molen, MBA, director of imaging services at EGH.

While the program was not expected to generate a profit, everyone who heard the presentations unanimously supported the effort. “If you step back to examine what’s best for the patient, you quickly realize that this program is a good thing,” Molen says. “If we break even at worst, it’s easy to prioritize the program.”

Once the program was up and running in June of 2012, the team ran into two notable hurdles. The first involved enrolling patients in the program.

Initially, the team marketed the program directly to smokers in Elkhart County. Radiologists and other physicians worked a booth at the county fair, where they spoke to smokers about lung cancer screening and distributed marketing materials. Patients, however, were not immediately interested in the program.

“It’s a need, but at the same time, it’s a bit of a hard sell,” Molen explains. “Women know they should get mammograms because their cancer risk naturally increases with age. With smokers, it’s different because they know they are doing something that’s bad for their health, so they’re often reluctant to pursue screening.”

After realizing this, the team changed course and began focusing most of its marketing efforts on cardiologists and other referring physicians who regularly treat smokers. Radiologists mentioned the program during tumor boards and quarterly staff meetings as well as in conversations with referring physicians.

Soon, primary care and other referring physicians began inquiring about the program, with cardiologists ultimately referring the most patients. “We took these opportunities over the phone or in person to really educate referrers about how screening can detect lung cancer in the early stages, when it’s still treatable,” Lamont says. “Expanding participation in the program really came down to old-fashioned dialogue.”

The second obstacle that radiologists faced involved the cost of care. Even though the price the hospital charged for screening was low relative to the cost of the service, some patients could not afford it. Rather than turning these patients away, the committee sought funding from the Elkhart Hospital Foundation to cover their screening. 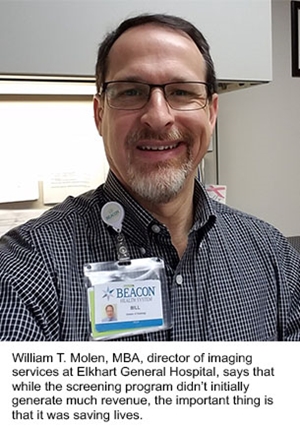 An advanced practice nurse for oncology services at EGH delivered a presentation to the foundation’s board about the benefits and cost-effectiveness of the program. After hearing about the important role lung cancer screening plays in saving lives, the board unanimously agreed to cover the cost of screening for individuals who met the program requirements but could not afford it.

By 2015, CMS began covering lung cancer screening for Medicare patients who meet specific guidelines , so the hospital foundation no longer needed to subsidize the program for many patients. What’s more, the out-of-pocket cost of screening at EGH eventually decreased to $165 once the program started generating downstream revenue for the hospital.

“We are perfectly OK with doing the exam for a very low cost because it is an opportunity to bring patients into our systems for care,” Molen explains. “More importantly, it saves lives. When you find cancers and find them early, everyone wins.”

While achieving this designation required radiologists to alter the way they classify patients, they rose to the challenge to better serve patients. “We have adapted to everything that has come down the pike,” Lamont says. “We have been willing to adjust, because we care about the program and know it’s a valuable service that meets an important community need.”

Patients who are diagnosed through the lung cancer screening program are invited to participate in EGH’s thoracic oncology clinic. Started as a way to deliver comprehensive, patient-centered care to lung cancer patients, the clinic gives patients and families a chance to meet in person with their multispecialty care team to ask questions, review images, and discuss treatment options.

“Patients and families go into the thoracic oncology clinic and are in awe because there are so many people there to help them,” says Cindie L. McPhie, vice president of operations at Beacon Health System and EGH, where she has been involved in the lung cancer screening program’s development from the start. “It gives them an amazing sense of comfort when they realize they have something this valuable right in their backyard.” 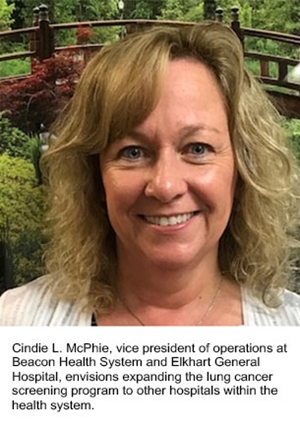 The growth opportunities in the surrounding hospitals encourage McPhie. “As we evolve more as a system, we will create avenues to help facilitate these programs in our other hospitals,” she says. “We have the potential to serve more people and save more lives in our community through this program.”

Molen agrees. “One of our mottos here at EGH is putting the patient at the center of everything that is happening,” he says. And his advice for others contemplating developing a lung cancer screening program is straightforward: “Know your doctors, community, and health system, and build programs appropriately to fit your system. Be persistent. For every one of those patients who has a serious health condition or cancer, it can be a huge difference between surviving and not surviving, and that makes everything worthwhile.”

It’s clear that lung cancer screening is saving lives in the Elkhart community. EGH physicians and administrators urge others to find ways to initiate these programs around the nation. “We are just a little community hospital,” says Lamont, “but look at what we have done. We support each other, and we encourage each other. Profound change can stem from that sort of teamwork.”

Breathe Easier by American College of Radiology is licensed under a Creative Commons Attribution-NonCommercial-NoDerivatives 4.0 International License. Based on a work at www.acr.org/imaging3. Permissions beyond the scope of this license may be available at www.acr.org/Legal .