Keeping PHI out of Medical Image Presentations and Educational Products

Recently, it was discovered that search engines can index patient identifiers (see appendix) in slide presentations and other documents that were believed to have been anonymized.

Advances in web-crawling and content processing technology employed by search engine vendors (e.g. Google, Bing and others) increasingly enable large-scale information extraction from previously stored files. Among other things, this technology can extract source images contained in PowerPoint™ presentations and Adobe® PDF files, and recognize alphanumeric character information that may be embedded in the image pixels. As such, an image with embedded patient information can be indexed by this process. When explicit patient information becomes associated with images in the search engine database, it can be found on subsequent internet searches on the patient’s personal information.

The first place to pay attention to potential PHI exposure is the initial workflow step of exporting images from the PACS or another imaging device or application.

Optimally, a “region of interest” type screen-shot is obtained which has only actual “anatomic” image pixel information in it. Alternatively, the user can disable the DICOM patient info, i.e. use the remove/hide overlays function in PACS first, and then obtain a screen shot.

Every time an image is saved directly from PACS as a file (as opposed to creating a limited screenshot), there is a risk that PHI gets into that file via patient data embedded as pixels within the image itself or in the form of metadata if a DICOM file is saved. Even when images do in fact contain PHI data it can be redacted using appropriate tools and processes. Of note in this example, the original file now resides on the local system drive and should be securely deleted.

Second, some images, for example, can hold data in Exchangeable Image Format tags (additional information stored together with pixel data), much as DICOM stores data in its tag structure. It’s possible the PACS will utilize these tags to store metadata that needs to be cleaned.

The next place to look for possible PHI exposure is during creation of a document or presentation that utilizes (exported) medical images. PowerPoint™, for example, is a Microsoft product which is frequently used to present images e.g. for medical professional education in a variety of settings.

When medical images are inserted into PowerPoint™ and the user attempts to redact burned in PHI data within the pixel data, they must be careful not to simply “cover up” the PHI by use of a mask. The most commonly used tool is cropping the image with the corresponding PowerPoint™ tool, or changing font color so the text blends into the background. Neither will result in actual removal of the information, rather it is just not visible in the authoring nor the presentation state. The “cropping” can be undone later by another user of the file. Modern search engine technology can automatically identify the content of the original inserted file and index PHI that might have been included. It is important when cropping an image to explicitly delete the portion that has been cropped so that it cannot later be uncropped. Microsoft has provided instructions on how to delete the cropped areas of a picture and save the file without them.

Examples in both the Mac and PC versions of PowerPoint™ are shown below. 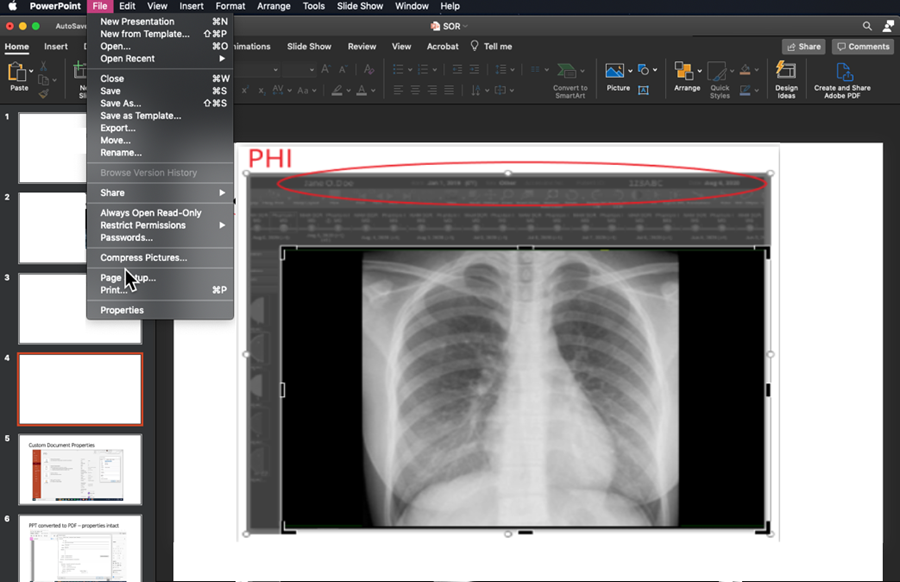 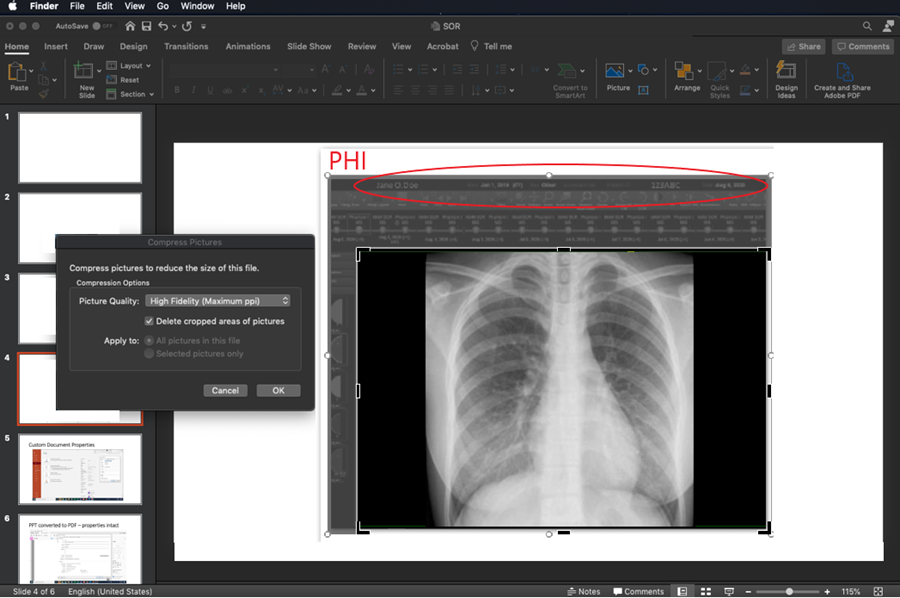 This can be done through the “Inspect Document” function in PowerPoint™ prior to publishing. 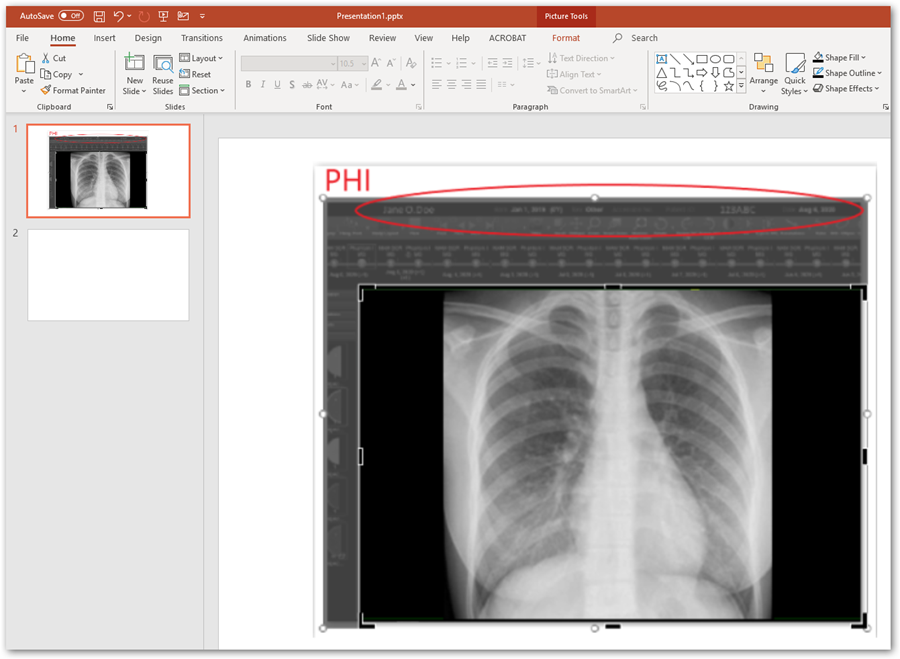 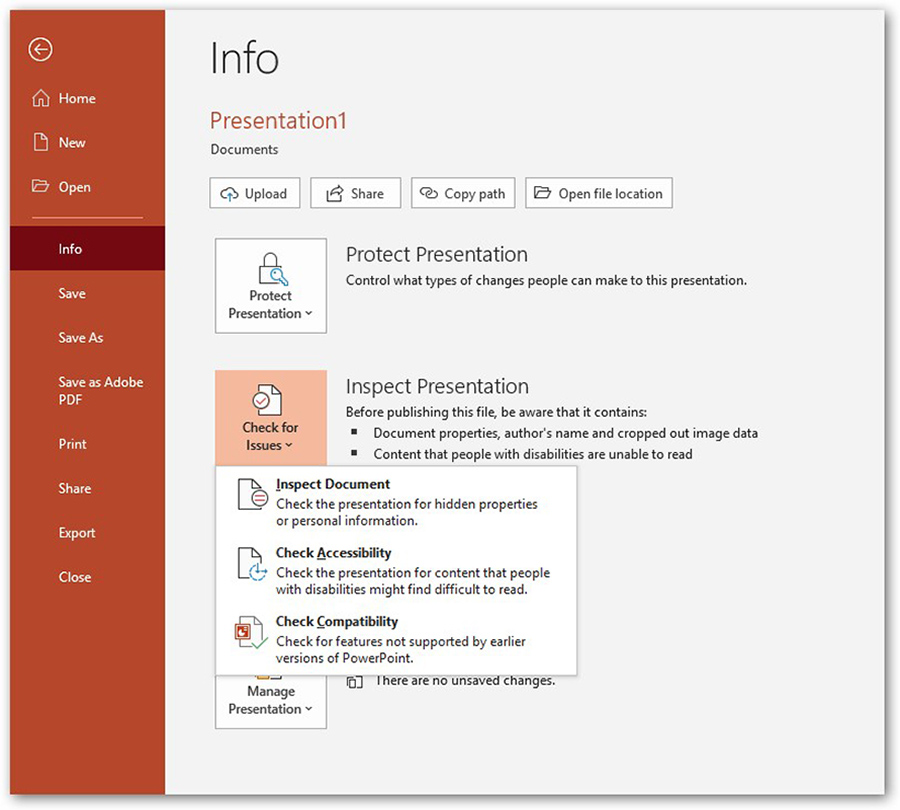 Finally, presentations and documents are often converted to PDFs for sharing across the internet. Although you may not see hidden data when simply viewing a PDF through a common viewer, the PDF can contain PHI in hidden objects as well as metadata stored in tags. Adobe has a “Sanitize” function that will help you identify and redact hidden data. 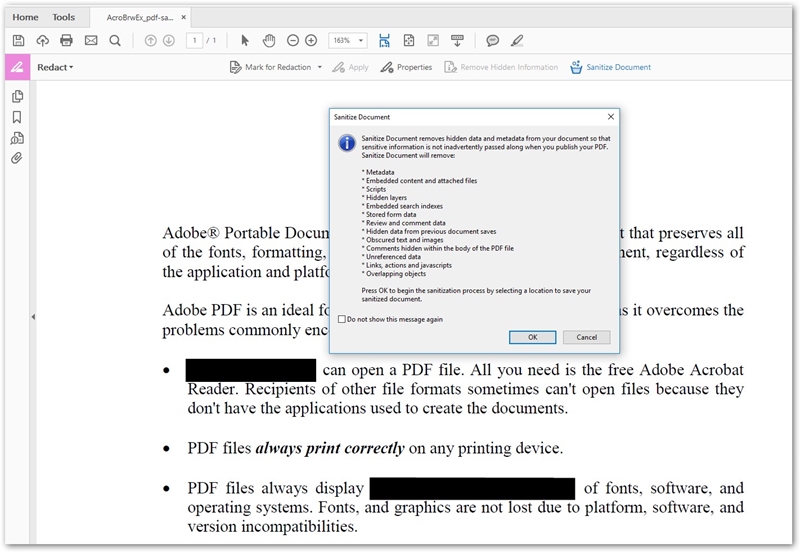 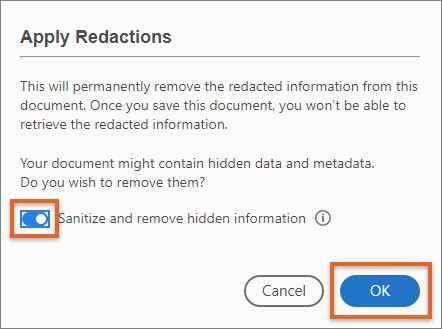 Additionally, please note that if you reside in a European Union member state or another nation, your use of patient-identifiable information even for educational purposes must comply with that nation’s privacy laws and regulations.

This article outlines privacy regulations and considerations for using medical images and related data in the EU and one major U.S. state.

If you or your practice or department remove metadata from medical images, please understand that will strip out alternative text that frequently is used to meet web site accessibility standards. Whether the Americans with Disabilities Act applies to websites and thus requires them to be accessible to individuals with disabilities, though, remains an evolving legal matter. Please consult your practice’s or institution’s legal counsel for specific guidance.

One of the challenges of publishing objects with hidden data is that it is often possible for programs that crawl the internet to find this hidden data and expose it without the author even knowing that data was distributed. Modern search engines are particularly adept at combing through publicly available files at scale, making it possible to quickly uncover a variety of data previously thought to be absent. Additionally, the ability to use Optical Character Recognition (OCR) at scale allows programs to quickly re-generate explicit PHI that was originally burned into the image pixels. Search engines can then associate (“index”) the image with that explicit PHI thereby making it discoverable. As a result, these data can be made available and linked to other text-based information.

What can you do if something gets out? You can ask the search engine company to review and consider removing a link to sensitive information if they agree that this is the appropriate action. Here is an example of how this process works with Google. Similar mechanisms are available for other search engines such as Bing once the content has been removed from the site.

In the “Security of Electronic Medical Information and Patient Privacy: What You Need to Know” and in various HHS references, there are robust discussions of Personal Health Information (PHI) and the importance of protecting patient data. It is the responsibility of the individual sharing the medical case to ensure data has been properly de-identified and that any legal constraints for sharing data have been met.

There are two methods for HIPAA-compliant deidentification, Safe Harbor which identifies specific data elements that need to be removed and Expert Determination, which is used to determine the risk of re-identifying a patient based on statistical expertise. When using medical imaging cases for public consumption via publications or educational activities, the Safe Harbor method should be used. This method identifies the following data elements should not be shared along with the medical image: