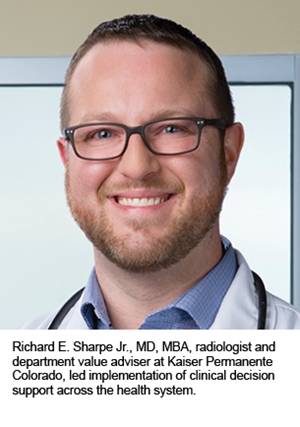 Unnecessary imaging not only wastes precious healthcare resources, it can also inconvenience patients and expose them to undue radiation — which may increase their future cancer risk. Radiologists and ordering physicians have made strides in reducing inappropriate medical imaging in recent years, but studies show that at least 20% of imaging tests may still be unnecessary or of “low-value.”1

The Protecting Access to Medicare Act (PAMA)  is intended to help further improve imaging appropriateness. The legislation requires referring physicians who order advanced imaging to consult appropriate use criteria via clinical decision support (CDS) for evidence-based guidance on the best imaging exam (or none) for each patient’s clinical condition.

The PAMA education and trial period began Jan. 1, 2020, with financial penalties set to kick in during 2021. However, some groups started implementing CDS years ago in anticipation of the mandate. Kaiser Permanente Colorado is one of these groups. In October of 2015, as part of a joint project between Kaiser Health Plan and Colorado Permanente Medical Group, Kaiser Permanente Colorado began implementing the CareSelect™ Imaging  CDS tool, which delivers a digital version of the ACR’s Appropriateness Criteria®.

“We realized early on that the complexity around appropriate image ordering was very high,” says Richard E. Sharpe Jr., MD, MBA, radiologist and department value adviser at Kaiser Permanente Colorado. “Even radiologists are sometimes challenged to stay up on the current advances and evidence for determining the best study for a specific patient. It’s understandable that the ordering clinician could benefit from just-in-time guidance with imaging study selection.”

Since implementing CareSelect Imaging, research led by Ted E. Palen, PhD, MD, MS, internist and medical director of utilization management at Kaiser Permanente Colorado, shows that high-value imaging orders have increased by three percentage points, from 77% to 80%. The data also show that change orders — adjustments to the original imaging order to another test — have decreased from 5.7% to 5.3%, indicating that more patients are getting the right study the first time.

“When the patient initially receives the right study based on best available evidence, this results in higher quality, lower cost, and fewer repeat exams,” Sharpe says.

Like providers nationwide, Kaiser Permanente’s primary care providers see patients with a wide array of conditions, and they weren’t always sure when to order imaging or which imaging exams would best answer their clinical questions. As a result, they often had to reschedule tests and change imaging orders, which delayed care and inconvenienced patients. To help address this situation, primary care leaders approached the radiology department about implementing CDS for imaging orders. Both groups saw an opportunity for improved patient care and approached management to pursue the initiative.

At Kaiser Permanente, new initiatives start with a detailed business plan that outlines project costs, return on investment, and expected benefits (such as quality, patient satisfaction, compliance, patient safety, and affordability) to the organization and its members. In this case, the team — which included executive staff from primary care, radiology, and other departments that order imaging — made the case that implementing CDS was an investment in providing quality care. The team also noted that the project would put referring providers in position to comply with PAMA.

Both Kaiser Foundation Health Plan and the Colorado Permanente Medical Group quickly approved the plan and issued a request for proposals to find a vendor to develop and adapt a system to work with Kaiser Permanente’s electronic medical record (EMR). Kaiser Permanente chose CareSelect Imaging from the National Decision Support Company (NDSC) in part because of ACR’s long history of developing appropriateness criteria (AC) and the ability to embed the product directly into Kaiser Permanente’s EMR.

“It was the only product at the time that was established and mature enough to be hardwired into our system and give a robust series of appropriateness evaluations,” Sharpe says.


Rolling Out the System

With more than 1,200 doctors serving 625,000 members at 24 locations in the state at the time, rolling out new the technology took a lot of coordination in this integrated health system. 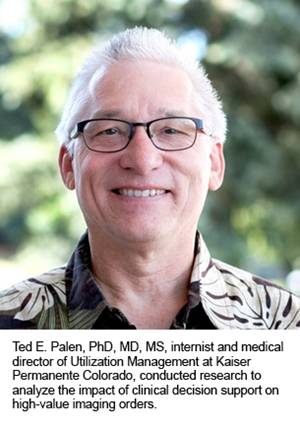 The team’s first step was to review the roughly 3,000 CareSelect Imaging algorithms that apply the ACR AC to ensure they meshed with Kaiser Permanente’s policies and procedures, as well as its physicians’ workflows. This manual process took about six months, says Julie Cohen, MD, internal medicine service line lead at Colorado Permanente Medical Group, who joined Kaiser and the project about midway through the process. The team initially set up the system for advanced imaging, specifically MRI and CT exams.

Concurrent with the algorithm review, the team developed a plan to prepare medical staff for CDS implementation with an information campaign and opportunities to raise questions and concerns. “We worked with department doctors to make sure they understood the rationale behind the system, how to use it, and expectations about its capabilities,” Sharpe explains. Based on the needs and circumstances of each department, the team also created a succinct message about PAMA compliance and the benefits of CDS implementation.

The team worked all this information into a CDS “roadshow,” a half-hour presentation that they delivered during regular department meetings held at each of Kaiser Permanente’s ambulatory clinics. The format allowed clinicians to ask questions, point out challenges, and track efforts to resolve them. “You have to get collaborative buy-in from clinicians to demonstrate why you want to do this and how it can improve care delivery for not only the clinician but also for the patient,” Palen says. “It can’t just be a top-down edict because the frontline docs are going to have to use it.”

To help ensure a smooth roll out and increase acceptance of the system, the team tested the software with clinical scenarios to detect and solve problems, such as coding errors, before rolling it out to clinicians. NDSC and Kaiser Permanente’s IT team worked closely during this phase to ensure the system ran smoothly.

After about six months of preparation, the Kaiser Permanente team took the CDS system live in early October of 2015. Initially, the tool worked in the background to collect baseline data about the appropriateness of imaging orders without CDS. It showed that Colorado Permanente Medical Group doctors ordered high-value tests about 77% of the time at baseline — significantly higher than most practices, which typically order high-value exams about 60% of the time, according to NDSC. Palen attributes Kaiser Permanente’s high scores to previous imaging appropriateness efforts, including peer comparisons of imaging orders for low back pain, headaches, and adnexal masses.

The team divided Kaiser Permanente’s clinics into four clusters and fully implemented the system in waves to minimize disruption and reduce the burden on the implementation team. The first cluster began using the system after two weeks of baseline data collection, the second after four weeks, the third after six weeks, and the fourth after eight weeks.

In full implementation, clinicians check boxes of structured indications for the patient’s clinical condition and then select the test they want to order. If the test is appropriate for the indications (receives an AC score of seven or above), the order goes through as usual. If the system scores the test at less than seven, the clinician gets a best practice alert that suggests other imaging options along with the relative radiation doses of those options. The clinician can cancel the order and switch to one of the suggested tests, or the clinician can decide to reject the system recommendations and go ahead with their original order, providing a free-text rationale for ignoring the CDS recommendation.

After a learning curve of about three weeks, doctors appear to get used to the system with minimal workflow interruptions. Providers follow the system’s preferred process about 90% of the time (use of the structured indications checkboxes), Sharpe reports. In the remaining 10% of cases, clinicians instead used the free-text box to explain the rationale for their study selection.

Implementation had its hiccups. During the first 18 months, the team made 60 changes to the system, many based on clinician feedback. For example, the system originally required clinicians to not only check structured indications but also enter details of the diagnosis and/or rationale in the free-text box. Clinicians reported that this step was burdensome, leading some to bypass the system. 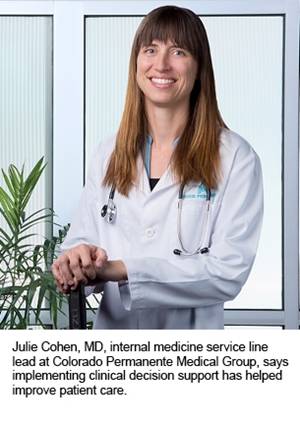 In other cases, clinicians disagreed with how the system scored their orders or simply didn’t see a need for CDS. “Primary care and specialty care had different notions of what the tool could be. Primary care saw it as an opportunity to support more efficient and accurate ordering, while specialty physicians saw it as a barrier to ordering what they already know is the right test,” says Sharpe, who acknowledged their complaints but pointed out that PAMA makes CDS a regulatory requirement to help get specialty clinicians on board.

Another key to adoption has been involving “super users” — clinicians most versed in the system — in testing system changes before pushing them out to all clinicians. For example, a super user from the orthopedic department discovered in a test that a proposed modification to the system would not work with the workflow in her department. Her feedback prevented a major bottleneck that would have created even more resistance to the system, Sharpe says.

NDSC staff and Kaiser Permanente IT staff have worked closely over the phone and through email to troubleshoot the system to meet clinicians’ needs. Once changes are implemented and tested, the project team communicates major system changes to clinicians through email and EMR notifications. Other changes occur on the backend and don’t require user notification. As they have made these tweaks, Cohen says that she has heard fewer complaints. “People don’t really notice the CDS system anymore,” she says.

Based on a year of data from 22,279 studies ordered by 1,300 clinicians in 23 ambulatory clinics from October of 2015 to August of 2016, the CDS system helped providers improve imaging appropriateness from 77% to 80% — a small but statistically significant finding.2 “We know that it increases the appropriateness of the exams, what’s less certain is exactly whether that increase in appropriateness corresponds to an improvement in patient care,” Sharpe says. Palen hopes to examine the impact on care in a follow-up study.

The CDS data have many potential applications. For instance, Cohen is using the information to identify areas for quality improvement and develop continuing medical education sessions for clinical staff. For example, data have indicated that providers are over-ordering CTs for headache and inappropriately ordering imaging for back pain. Cohen has shared this data with clinicians, emphasizing the important role of CDS in quality improvement.

Using data directly from Colorado Permanente Medical Group physicians helps “strike the point home for them,” she says and encourages “physicians to investigate how they use the tool to improve quality, rather than feeling like their practice is being monitored. It creates buy-in.”

Although it’s too early to tell whether the investment will result in healthcare cost savings, the valuable data that the system provides and the PAMA requirements add up to a compelling argument for CDS, the physicians say. “The more conversations we have about CDS, the more convinced the team has become that this is a meaningful investment — not just financially but for the betterment of patient care,” Cohen says.

Enhanced Imaging Appropriateness by American College of Radiology is licensed under a Creative Commons Attribution-NonCommercial-NoDerivatives 4.0 International License. Based on a work at www.acr.org/imaging3. Permissions beyond the scope of this license may be available at www.acr.org/Legal .

Emily Paulsen is a freelance writer.