Ohio State University researchers assert that radiology departments should prioritize improvements in technology to reduce radiation dose.
Get a PDF version of this Case Study
Download 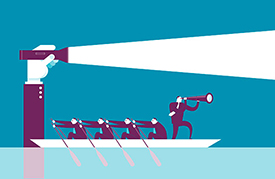 In a recent article published in the Journal of the American College of Radiology , Michael Rayo, PhD, adjunct professor at Ohio State University’s (OSU) department of integrated systems engineering, details how he and his co-authors set out to determine the differences in radiation exposure from 2008 to 2012 to patients receiving CT scans of the abdomen, head, sinus, and lumbar spine at Ohio State University Wexner Medical Center in Columbus, Ohio.1 During that period, the medical center had implemented radiation dose reduction strategies. Rayo and his team wanted to see whether the combined impact of CT volume and dose reduction strategies had actually reduced radiation exposure in adult patients receiving CT examinations. The researchers collected data from two internal data sets — general medicine and intensive care unit patients — and calculated annual CT volume, rate, average effective dose, radiation exposure, and estimated cancer risk.

From the 2008 to 2012 timespan, the researchers found a 29 percent reduction in abdominal CT rate (i.e., volume per admitted patient). No volume reductions were found for head CTs and lumbar spine CTs. Because of dose reduction strategies, there was a 30 to 52 percent decrease in radiation exposure for the body areas identified, and the combined reduction in volume and dose per procedure decreased the estimated induced cancers by 51 percent.

Rayo and his advisor and co-author on the research paper, Emily S. Patterson, PhD, professor of health information management and systems at OSU, had been researching decision-making in health care, including imaging. As part of their analysis, they realized radiologists had a better knowledge of the risks of ionized radiation than the majority of prescribers. “Dr. Patterson developed an interest in diagnostic imaging, specifically for pediatrics, when her family members as well as her students began receiving CTs and did not understand the risks of ionizing radiation,” explains Rayo. “When my father became sick and was in the hospital with a complicated case, he was also getting a lot of head CTs, as well as some procedures with ionizing radiation in the chest area and tests that involved contrast. I happened to speak to the physician who was caring for him and asked him what he thought of the risks, and he replied, ‘probably nothing.’”

Rayo’s team — which also included Beth W. Liston, MD, PhD, pediatrician at Nationwide Children’s Hospital and hospitalist at OSU’s Wexner Medical Center in Columbus, Ohio; Susan White, PhD, professor of health information management and systems at OSU; and Nina Kowalczyk, PhD, assistant professor at OSU’s department of clinical radiologic sciences and therapy and organizational effectiveness consultant for OSU’s Wexner Medical Center — tried to understand the decision-making process of how and when prescribing physicians order CTs. As part of this research, they wanted to understand if the results of Medicare studies,2, 3 which showed a peak in CTs and MRIs and then steadily began dropping, were also occurring in the non-Medicare populations at OSU.

At the beginning of the study, it was unclear whether recent protocol and technology changes implemented for both Medicare and non-Medicare patients had affected individual and population cancer risk. “We tested this population because it had not been tested before, and because we had access to it,” Rayo states. “From the literature and from our combined experience, we believed that lumbar spine and sinus CTs have a high rate of inappropriate imaging. For example, we observed frequent imaging for uncomplicated rhinosinusitis and lower back pain, in which the images have a low likelihood of affecting the diagnosis or treatment plan (i.e., they are low yield). In general, we wanted to understand how decision-making was similar or different in these lower-volume imaging tests that were more likely to be of low yield.” 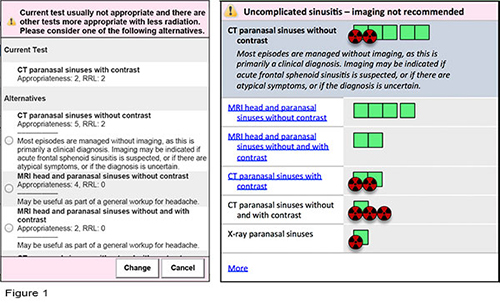 Each author brought his or her own background and expertise to the table. The team also sought out the expertise of Gabriel Chiappone, MBA, associate director of imaging services in OSU’s radiology department, who is a liaison between radiologists, medical physicists, and CT technologists, to bring consistency and standardization to the various protocols. “Ultimately, we all want patients to be safer,” says Rayo. “Dr. Patterson and I focused on cognitive engineering ways to make things safer. Our proposed intervention was a data visualization (Figure 1) that serves as an imaging decision-making aid for a range of clinical situations, including those in which the underlying data is incomplete or incorrect. Dr. Liston, as the hospitalist, brought in a vital perspective for measuring the behavior of prescribers or referring physicians. Dr. Kowalczyk provided insights into the details of the imaging technology and protocols and Mr. Chiappone’s focus was to use better technologies and be more controlled in the tests and dosages we’re giving.”

OSU participates in the Dose Index Registry and Image Gently® . Both sites guide staff on appropriate protocol, radiation dose parameters, and provide information for some of the latest developments in radiology. Last year, ACR’s Appropriateness Criteria® (AC) were used in a stand-alone program. Chiappone says that OSU is working on implementing a more integrated AC program in the near future to ensure referring providers are inherently aware of appropriateness levels at the earliest stages of ordering a test.


According to the researchers, implementation of new protocols and technology was more effective in reducing radiation exposure than the observed reduction in CT volume. The plan of action for dose reduction involved:

The greatest opportunity for dose reduction came from creating a consistent baseline for protocols across the system. This gave OSU the ability to better monitor each scanner and its capabilities. Chiappone had already begun standardizing and re-educating staff within OSU’s radiology department. “There were inconsistencies with the ‘owner’ of protocols that were revamped and edited randomly,” Chiappone explains. “CT studies were conducted in many geographic locations,” adds Kowalczyk. “In most cases, CT technologists reported to various supervisors; and, although CT study protocols were supposed to be standardized, they varied considerably.”

With these systems in place, the focus remains on decreasing dose. A common technology that CT equipment manufacturers have put into place reduces radiation dose by varying the milliamperage used. It is based on the body part density on a single patient during the scan. It uses a different algorithm approach to reduce image noise in creation of the digital image, allowing the use of lower radiation doses while maintaining diagnostic quality images. Most recently, the staff utilized Siemens’ CARE kV™ technology that measures topogram density to automatically vary the kilovoltage prior to each CT scan.

“I think what stands out the most for our institution is the difference in magnitude of the risk reduction with the technology versus the risk reduction of the rate,” Rayo remarks. “It’s unknown if we can reduce the volume of imaging even more, but I think it’s really heartening to see the progress we’re making on the technology side. Usually we find technology is great and will continue to improve our lives, but it’s the people who are doing things in a smarter way that yields the most benefit. It seems the technology that is thoughtfully being implemented is knocking down barriers continuously. Having high-yield imaging with low radiation is incredibly impactful, and I think that’s the biggest finding from this.”