Editor’s note: This case study is part of a series called Imaging 3.0 NOW. Case studies in this series highlight straightforward initiatives that radiology practices can implement immediately to jumpstart or advance their Imaging 3.0 efforts.


“A patient presents …” The medical community uses this phrase frequently when discussing patients’ symptoms. However, the idea of a patient presenting has taken on new meaning in the radiology department at Indiana University (IU).

There, radiology leaders have begun inviting patients to attend teaching conferences and present their imaging experiences to residents and other trainees. The goal is to inspire incoming radiologists to provide high-quality, patient-centered care and encourage them to remember the significant impact they can have on individual lives.

Richard B. Gunderman, MD, PhD, FACR, the John A. Campbell professor of radiology at IU in Indianapolis, says the notion of having patients share feedback at resident teaching conferences grew from a desire to improve the patient experience through education and awareness.

The noontime conferences usually include approximately 40 residents and fellows and about 20 medical students. Patients have presented at two of the daily conferences so far, and Gunderman plans to invite more patients to the meetings going forward.

“Normally a teaching conference would consist of a radiologist showing cases, such as chest X-rays and head CT scans, or having the residents look at cases and try to figure out the pathological conditions,” Gunderman explains. “But then we thought, ‘Instead of focusing solely on the images, let’s have patients come and talk about what their experiences were like being diagnosed with diseases such as cancer.’”

Gunderman reached out to several patients and immediately found two courageous women who were willing to share their stories. He believes one of the reasons the women, both of whom had been diagnosed with breast cancer, were so willing to participate in the conferences is that they both had worked in radiology departments in the past. 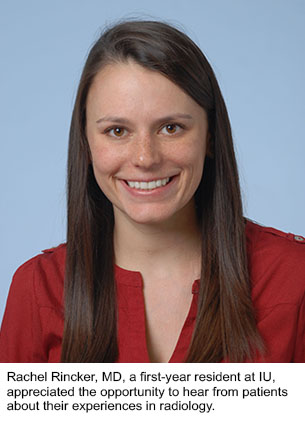 At the start of the conferences, Gunderman asked a few questions, which prompted each of the women to detail her personal experience. The residents then had the opportunity to ask questions, with many inquiring how the physicians might have done better and how the patients viewed radiologists.

Rachel Rincker, MD, a first-year resident at IU, says that while both women expressed unease about having received their diagnoses over the phone, their feedback about radiology was mostly positive. “Breast cancer is a particularly strong story because it’s a screening examination,” she says. “These women specifically said, ‘The radiologist made a huge difference in my care.’”

Through the Patient’s Eyes

Following the two patient-centered conferences, a survey of attendees revealed that many residents rated the conferences highly, while others also told Gunderman in person that they enjoyed the sessions. Based on this feedback, Gunderman says the department hopes to conduct multiple conferences like this each year and use what they learn to improve patient care.

“Most radiology residents are in their 20s, and, fortunately, most of them haven’t faced too many serious illnesses during their lives,” Gunderman explains. “Unless you have experienced it yourself, it can be difficult to appreciate what it’s like to be told you have cancer or another serious illness. Getting to interact with these patients offers an opportunity to see it through their eyes.”

Rincker agrees that the patient presentations were an important milestone of her training. “It’s such a good reminder of why we get into medicine,” she says. “A lot of physicians get lost in the daily work and forget why they got into medicine and how much it means to people, how much they can help change the course of someone’s life. Hearing from patients in this way helps you retain that perspective.”

Learning from Patients by American College of Radiology is licensed under a Creative Commons Attribu-tion-NonCommercial-NoDerivatives 4.0 International License. Based on a work at www.acr.org/imaging3. Permissions beyond the scope of this license may be available at www.acr.org/Legal.