With the help of technologists, radiologists in Colorado are taking a more active role in patient care through an immediate results delivery program.
Get a PDF version of this Case Study
Download 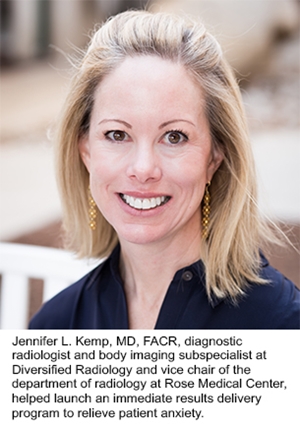 When her husband was diagnosed with Stage 3 rectal cancer 13 years ago, diagnostic radiologist Jennifer L. Kemp, MD, FACR, got a firsthand glimpse into the anxiety that many patients experience after imaging exams. “I saw the absolute terror that my husband went through as he awaited the results of every CT scan,” says Kemp, a body imaging subspecialist at Diversified Radiology of Colorado. “Before that, I didn’t realize how many of my patients were going through the same thing.”

In the past, Kemp’s patients typically waited a week or more to receive their imaging results. With advances in technology, Kemp and her colleagues can now read studies within a couple of hours, but many patients still end up waiting days to receive the results from their ordering physicians. “There’s no reason patients should have to wait. They should have that peace of mind as soon as we have the findings,” says Kemp, who is also the vice chair of radiology at Rose Medical Center.

Driven by her husband’s experience, Kemp became more passionate about patient-centered care. She and her core team of body imagers at Diversified Radiology started dedicating time during their quarterly team meetings to discussing ways to become more patient centered. They began by adding their phone numbers to their radiology reports, which increased their accessibility to referring providers and patients. (Read more about this initiative in this Imaging 3.0 case study.)

From there, the team initiated several other patient-centered efforts. The most recent one — an immediate results delivery pilot program — began in December of 2017. Through this initiative, the radiologists discuss their findings with patients over the phone immediately after their imaging exams. While the radiologists don’t yet offer this service to every patient, the group’s technologists report that about 90% of patients who are extended the opportunity to consult with a radiologist take it. “Patients want their results as soon as possible so that they don’t have to suffer the anxiety that comes with waiting,” Kemp says. “By reducing that waiting time, this service significantly improves the patient experience.”

When Kemp and her body imaging team, which is based at Rose Medical Center, began the immediate results delivery program, they wanted to keep it manageable. To that end, they limited the program to patients who underwent CT and ultrasound exams at the hospital’s outpatient imaging center. They focused on outpatients specifically, because the hospitalists usually deliver imaging results to inpatients rather quickly.

Kemp and her team are the only subspecialty-trained radiologists who read CT and ultrasound images onsite at the hospital, which is located next to the imaging center. Instead of trying to coordinate face-to-face meetings across locations, the team determined that phone calls would be the easiest way to connect with these patients.

Still, some team members worried about the amount of time these conversations would require. To address these concerns, the radiologists agreed to conduct consultations between 8­­ and 10 a.m. on Mondays, Tuesdays, Wednesdays, and Fridays — when their workloads are relatively light. They also committed to working with the technologists to adjust this window, as necessary, to include more patients. “We wanted to make ourselves as available as possible for patients,” Kemp says.

Before they could initiate the pilot program, the radiologists needed buy-in from patient-facing CT and ultrasound technologists, who play a key role in coordinating the service. When Kemp first approached the lead technologists individually to ask whether they’d be comfortable offering this service to patients, their response was overwhelmingly positive, and they agreed to help develop a plan for coordinating the new service. 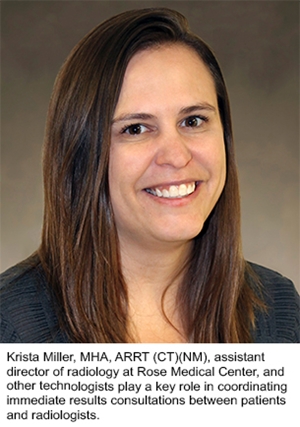 “I’m honored and excited to be part of this program,” says Krista Miller, MHA, ARRT (CT)(NM), assistant director of radiology at Rose. “The technologists already had a collaborative relationship with the radiologists at this facility, so the buy-in was quick.”

While the lead technologists were on board with the program from the start, some other techs worried that it might add another step to their workflow, negatively impacting their schedules. To minimize telephone disruptions, some technologists leverage their PACS’s instant messaging system to notify the radiologists whenever a patient opts for immediate results delivery.

The techs also have the authority to decide when to offer the service based on patient need — making it easier to adopt. “If we told the techs, ‘You have to offer this to every single patient,’ that could be a real workflow issue, especially if they’re swamped with add-on patients,” Kemp says. “Giving them the leeway to decide which patients would benefit from it builds more buy-in.”

Most of the department’s 10 CT and ultrasound technologists are participating in the program, and Kemp expects that eventually they will all consistently offer the service to patients. “As the technologists see the positive impact they can have with this program, they recognize that it’s the right thing to do,” she says.

While the technologists do consider their workloads and the radiologists’ availability to an extent, they don’t hesitate to offer consultations whenever patients seem particularly worried. “A patient might reveal stress or anxiety about the results during an exam, so you have to be empathetic to those signals,” Miller says.

For example, if a patient expresses concern about having to wait to receive the results from the referring physician, then the technologist will often extend the offer to speak with a radiologist. “We say, ‘Our radiologists are happy to review the results with you today, if you’re willing to wait a few minutes,’” Miller says. “Most patients are willing to wait, you just have to give them realistic expectations about how long it will be.”

In patient Dave Neslin’s case, opting to speak with the radiologist turned out to be one of the best decisions he could make. Last March, Neslin visited his primary care office for enlarged lymph nodes in his neck — a possible progression of his chronic lymphocytic leukemia. His provider ordered an ultrasound, and immediately after the exam, Neslin spoke with the radiologist. “The sooner I knew how serious it was, the better,” says Neslin, an attorney in Denver who was diagnosed with the disease two and half years ago.

Neslin spoke with Kemp, who informed him that all of the lymph nodes in his neck were swollen and urged him to go see his oncologist right away. She even contacted his oncologist directly to share the findings and help facilitate a timely appointment. After a confirmatory biopsy, Neslin began targeted drug therapy within two weeks of his ultrasound. “If I hadn’t gotten the ultrasound results immediately, that prognosis alone could have taken several weeks,” Neslin says. “This allowed me to begin treatment sooner and helped me manage my disease, while reducing my anxiety about my future.”

The radiologists talk to an average of two patients a day. While some cases are serious, most of the consultations focus on routine findings and last fewer than 10 minutes. “The majority of results are normal, so the conversations are simple,” Kemp says. “If we have a more difficult conversation ahead of us — a suspected cancer diagnosis or other results that may be sensitive, scary, or confusing — it’s customary to contact the referring physician before speaking with the patient.” 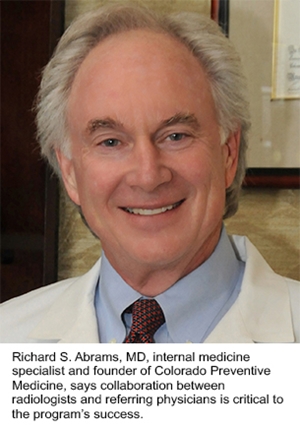 If the scans reveal an emergency finding, such as appendicitis, the radiologists instantly notify the referring provider, and then help coordinate the patient’s transfer to the emergency room (ER). For example, one patient was experiencing severe headaches, and his outpatient scan revealed acute bleeding in his brain. In a customary workflow, the patient would have left the radiology department before a radiologist had a chance to review the images — but because he waited for his results, the radiologists were able to send him directly to the ER.

In other cases, the radiologists might not know a patient’s next steps for treatment. These instances give the radiologists an opportunity to explain their role to patients, Kemp says. “Radiologists worry that patients will ask questions that they can’t answer,” she says. “We don’t have all the answers, and I often say that to patients: ‘I don’t know, but I’m going to talk to your physician and put this puzzle together, and then your doctor will contact you about the next steps.’”

The radiologists have many referring providers’ cell phone numbers, and often discuss patient cases with them. This communication has been a key to the project’s success. “I’m not going to be blindsided with a call from a patient saying, ‘The radiologist told me I have cancer,’ because the radiologists keep me in the loop,” explains Richard S. Abrams, MD, founder of Colorado Preventive Medicine who, as an internist, refers patients to Diversified Radiology. “The only way this works is if there’s real trust between the patient, the physician, and the radiologist. Collaboration is absolutely critical to ensure that none of us is overstepping our skills and bounds.”

Based on patients’ positive responses to the ongoing pilot project, Kemp and her team want to eventually expand the immediate results delivery program throughout the rest of Diversified Radiology’s 60-member practice. From there, they hope to leverage technology that will allow the radiologists to also show patients their images, taking the encounters from just phone calls to truly virtual consultations.

Diversified Radiology already has a program in place in which the radiologists use remote access software to show lung cancer screening patients their images on a PACS station in the outpatient center. Kemp envisions using this software for the virtual consults, allowing the radiologists to highlight findings on scans without leaving the reading room.

While broadening the initiative will take time, Kemp says it’s an important step toward more patient-centered care. “My vision is to gradually alter our radiologists’ workflow to make direct patient consultation the norm, rather than something special that we offer only during certain hours of the day,” Kemp says. “All patients deserve the right to know their results as soon as possible.”

Instant Results by American College of Radiology is licensed under a Creative Commons Attribution-NonCommercial-NoDerivatives 4.0 International License. Based on a work at www.acr.org/imaging3. Permissions beyond the scope of this license may be available at www.acr.org/Legal