Radiologists develop a program that encourages ED patients to follow up on incidental findings.
Get a PDF version of this Case Study
Download
Imaging 3.0 in Practice: Leaders in Patient Engagement
Download PDF 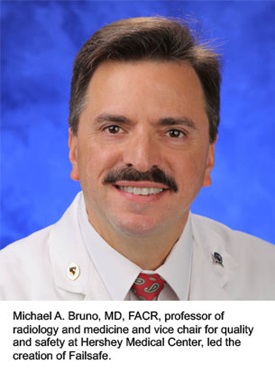 A patient visited the emergency department (ED) for a rib injury. A CT scan showed no broken bones, but the radiologist noted a pulmonary nodule in the patient’s left lung and recommended follow-up imaging. At discharge, the emergency physician suggested that the patient follow up on the nodule with his primary care physician (PCP) — but that didn’t happen.

Now, a year later, the patient is having another CT, and this time the radiologist suspects and a biopsy confirms the presence of lung cancer. The patient finally begins treatment, but the chances of a positive outcome have significantly diminished.

Scenarios like this one occur every day in hospitals nationwide.1 At Penn State Milton S. Hershey Medical Center, radiologists have taken the lead to address the issue with Failsafe, a program that uses letters and phone calls to inform patients about incidental findings discovered in the ED and encourages them to follow up with their PCPs. And it’s having a positive impact.

In the past six months alone, 70%of the patients that the Failsafe team has spoken with indicated that they didn’t know about their incidental findings and follow-up recommendations until they received either the letter or the phone call. “The program goes beyond the standard of care to ensure patients can address incidental findings in a timely manner,” says Michael A. Bruno, MD, FACR, professor of radiology and medicine and vice chair for quality and safety at Hershey Medical Center.

Bruno and his team developed Failsafe after they learned about ED patients at Hershey who didn’t receive the recommended follow-up care for their incidental findings and, as above, presented later with advanced cancers.

They found three gaps in the communication process for handling incidental findings in the ED: 1) the preliminary radiology report sometimes excluded incidental findings, which were later added at the stage of the final report but might not have been noticed by the emergency physician; 2) some ED patients didn’t have a regular PCP, and if they did, the PCP generally was never alerted to the incidental findings and was often completely unaware of the patient’s ED visit; and 3) the emergency physician occasionally failed to communicate the findings to the patient and/or PCP.

“As a result of these communication gaps, the majority of ED patients with incidental findings that required follow up and their PCPs were never told about the findings,” Bruno says.

Even when patients were informed of their incidental findings in the ED and told to follow up with their PCPs, most didn’t do it. “Patients have the sort of mistaken impression that when they go to the ED, they’ve been thoroughly evaluated by a doctor, so they generally don’t visit their primary care physician right after an emergency room visit,” Bruno explains. “Patients don’t realize that emergency physicians provide only acute management assessment and treatment of presenting conditions. And despite being instructed to do so, patients don’t always understand the need to follow up with their primary care physicians.”

To close these gaps, Bruno and his team initially thought about sending their reports to ED patients’ PCPs. But most of the patients that the radiologists talked to couldn’t provide their PCP’s name, because they either couldn’t remember it or they didn’t have a family physician.

So instead, Bruno and his team opted to communicate their findings directly to patients. “We would use the patient to carry our message to their PCP, who could then discuss our findings and recommendations with the patient,” Bruno explains. “Our thinking was that patients have the most amount invested in the information, so they would be the most likely to convey the message and help us communicate better with the clinicians we serve.”

With Failsafe, the radiologists send patients letters, informing them that they have incidental findings that require follow-up with their PCPs. To protect patient privacy, the letters exclude specific findings or follow-up recommendations.

“The letters have minimal customization,” says Bruno, whose signature appears on each one. “We have one for adults and another for children, both available in English or Spanish, but other than that, all of the letters are the same.” Eventually, though, the team discovered that the letters alone were not enough.

After developing the Failsafe model, Bruno called several emergency physicians, PCPs, and other stakeholders to pitch the program. William M. Bird, DO, vice chair for clinical care in Hershey’s Department of Family and Community Medicine, says he was relieved to learn about the program. “Most primary care docs are concerned about a small irregularity getting overlooked and then having it come back to hurt the patient months or years later, when it could have been addressed earlier,” Bird says. “We agreed with the radiologists that this was an important quality issue.”

Glenn K. Geeting, MD, medical director for hospital quality and vice chair for quality in emergency medicine, also saw the program’s benefits. “As emergency physicians, sometimes we receive the final radiology report after the patient leaves the ED, and we aren’t sure what to do with the incidental findings,” Geeting says. “The findings may not be significant enough to call the patient back, but at the same time, we worry they could be a potential risk to the patient down the line. This program solves that issue and gives us peace of mind.”

With stakeholder support, Bruno and his team assembled a workgroup that included emergency physicians and PCPs, an attorney from the hospital’s legal team, the chief quality and chief medical officers, and both the ED and radiology department chairs. The group hashed out the program’s details, such as how to handle patients who didn’t have a PCP.

“We agreed to take all of those patients as new patients,” Bird explains. “The letter provides a number that patients without a primary care physician can call, and we make it a priority to address their findings as soon as possible.”

When Failsafe launched in 2012, Bruno sent a memo to care providers to ensure everyone knew about the program. The radiology department’s administrative team then began sending the letters to patients without any additional follow-up. But Bruno knew he needed to actually speak with the patients to gauge the program’s impact.

After the team had sent 100 letters, Bruno called about a dozen patients to hear their thoughts on the letter. “Some of the patients said the letter upset them a little, but mostly they were happy to get the information,” Bruno says. “Of the patients I talked with, eight had already arranged their follow-up appointments, one said he wasn’t going to follow up, and another said she wasn’t going to follow up, but since I called, she would.”

From those initial calls, Bruno felt good about the program’s impact. But after the team sent 500 letters, Bruno called another sampling of about 24 patients, and the response wasn’t as positive. Most of the patients didn’t bother returning Bruno’s phone calls, and a majority of the patients he spoke with said they weren’t concerned about the letter. “Some said that they didn’t read the letter because they assumed it was about their bill, or they thought they already knew what it was about and just threw it away,” Bruno recalls. “Others said they didn’t think they needed to follow up.”

Realizing the program had an engagement problem, Bruno began advocating to hire a nurse to not only send the letters but also call the patients to ensure they received the letters and encourage them to schedule their follow-up appointments. Convincing hospital administrators to hire a nurse to manage the program wasn’t easy, but Bruno made the case with help from the chief medical and chief quality officers.

Specifically, the trio argued that if the program prevented just one lawsuit, it could potentially save the hospital millions of dollars. They also argued that revenue from the follow-up appointments performed at Hershey could offset the program’s cost, and that the nurse could also perform quality analysis. “These three arguments helped sway the more cost-conscious administrators, and so the hospital administration ultimately decided to cover the nurse’s salary,” Bruno says.

Nicole Seger, MSN, RN, CPN, patient safety analyst, joined the team and began managing Failsafe in the first quarter of 2016. Around the same time, Bruno sent out another memo via the medical staff office to remind everyone in the Hershey care community about the program.

“It’s important that when you implement a program like this, your whole system knows about it because patients are going to ask questions and schedule appointments, and everybody needs to know what they’re referring to and what’s happening,” Seger says. 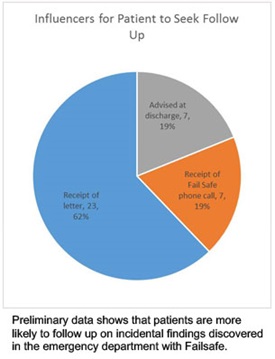 In addition to hiring Seger, Bruno and his team worked with an IT expert to automate the Failsafe process and provide tracking capabilities. Now, when an ED patient has a non-critical incidental finding that requires follow up, the reading radiologist enters the case into a program embedded within the department’s picture archiving and communications system, which puts the case on a list for an oversight committee member to review each week.

Once the committee member approves the cases, Seger enters them into a tracking system that automatically pulls the patients’ contact information and generates a letter for each case. Seger mails the letters and creates a flag in the system that reminds her to call the patients in 10 days to confirm that they have received the letters.

During the calls, Seger also collects and documents other information, like what the patients thought of the letter and whether they have scheduled their follow-up appointments. “Most of the patients I’ve called have been glad to receive the letter and have indicated that they intended to follow up with a primary care physician,” Seger says. “They also say the phone call, me reaching out to them directly, increased their motivation to follow up.”

Planning the Next Phase

In the past six months, Seger has sent 106 letters to ED patients with incidental findings and reached 48 of them by phone. Of the patients she’s spoken with, 21% said that they planned to follow up with their PCPs.

“With this preliminary data, we’re already learning a lot about patient engagement and how to reach patients more effectively,” says Bruno, adding that the program will also help radiologists and other providers better understand the long-term impact of incidental findings follow-up.

While the team is just beginning to collect data about the program’s results, the anecdotes from patients and support from emergency physicians and PCPs has convinced Bruno to expand the program again in 2018. This time he’ll take it beyond the ED to include all of Hershey’s radiology patients.

“We knew the ED would provide a solid proof of concept to start, but we have other patients who have incidental findings that aren’t followed up as reliably as we would like,” Bruno says. “We think we could do more good if we included all imaging patients to ensure they have the information they need to follow up with their primary care physicians about our evidence-based recommendations. By doing so, we could save even more patients from enduring the potential harms associated with delayed care.”

Failsafe by American College of Radiology is licensed under a Creative Commons Attribution-NonCommercial-NoDerivatives 4.0 International License. Based on a work at www.acr.org/imaging3. Permissions beyond the scope of this license may be available at www.acr.org/Legal .