Radiologists get a lesson in conveying empathy to patients.
Get a PDF version of this Case Study
Download 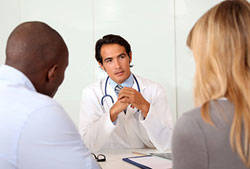 Imagine your 6-month-old patient’s parents are anxiously waiting in the next room. Ultrasound images confirm a tumor in their son’s liver. Now, you must convey the bad news. But these aren’t actual parents.

In reality, this is a simulation, and the nervous people next door are professional actors who specialize in improvisation and are trained to respond to various medical scenarios. These innovative workshops — offered by the Program to Enhance Relational and Communications Skills or PERCS — are held at Boston Children’s Hospital (BCH) to teach radiologists and other practitioners how to communicate effectively with patients and their loved ones.

Few doubt the importance of teaching interpersonal and communication skills to health-care professionals. Recently, the ACR created Imaging 3.0™, an initiative that encourages radiologists to get out of the reading room and interact with patients (visit Imaging 3.0 for more information and resources). In fact, these critical skills are core ACGME competencies mandated for radiology residents. However, traditional instruction through lectures and readings “place learners in a passive mode, merely absorbing information,” write two former PERCS participants in Academic Radiology.1

Several BCH leaders realized the need for more hands-on instruction regarding communication with patients. Simulation has become commonplace in medicine, but only for practicing technical skills. “Usually, simulation focuses on procedural learning with mannequins,” says Elaine C. Meyer, PhD, RN, BCH’s Institute for Professionalism and Ethical Practice (IPEP) Director and Associate Professor of Psychology at Harvard Medical School in Boston, Mass. “We thought, ‘Wouldn’t this be a great way to learn how to interact with patients?’”

The PERCS workshops began in 2002. PERCS has subsequently developed workshops to improve communication and interpersonal skills in various medical disciplines. As Meyer notes, however, radiology was not an initial focus because radiologists have not historically practiced “front line” patient communication. Now, times are changing, and Imaging 3.0 and PERCS are helping ACR members adapt. 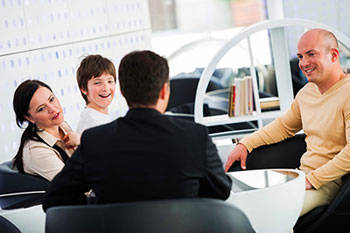 In 2011, Brown secured a two-year grant from the RSNA Research and Education Foundation to establish PERCS-Radiology. The funds have been used for several purposes, such as bringing nonlocal radiologists to Boston to attend the daylong workshops. Brown has run a dozen radiology-specific workshops, each with up to 25 participants who include attending radiologists, radiologists-in-training, radiology technologists, nurses, non-radiologist physicians, medical interpreters, social workers, and even psychologists. “If you put physicians together with nurses and psychologists and other individuals, their learning tends to be much richer,” says Meyer. Also present during the sessions are several faculty members, including Brown; Meyer; David M. Browning, MSW, IPEP Senior Scholar Emeritus; Robert L. Lebowitz, MD, Emeritus Professor of Radiology at BCH; Michael J. Callahan, MD, Division Chief of BCH Abdominal Imaging; and one patient-family representative who is usually a parent whose child has complex medical issues. This diverse group makes for productive and supportive workshops. “It’s a safe learning environment,” says Meyer. “Nobody’s going to get hurt. Nobody’s going to get humiliated.”

Meyer and a hired performing arts consultant screen, prepare, and educate the actors around particular patient or family member characters. “We use improvisational actors,” says Brown, noting that actors do not read off scripts but are prepared to respond the way a patient or family member would. Consequently, “professionals are trained to make [the enactments] not too easy, but also not too hard,” says Meyer. “They hit a sweet spot where something is challenging but can still be mastered.”

Mary H. Scanlon, MD, FACR, Diagnostic Radiology Residency Program Director at the Hospital of the University of Pennsylvania (HUP) in Philadelphia, and a PERCS-Radiology participant, agrees about the program’s benefits. Accordingly, she is establishing a similar program at her own hospital. Scanlon is creating a video of best practices for difficult conversations. Each year, she plans to run one in-person simulation on communication topics used at BCH, while adding scenarios her own trainees have faced. “Other people can use the scenarios Boston Children’s Hospital wrote up or create their own local scenarios like I’m doing,” Scanlon explains. “Radiologists in general should be out talking to patients every day.” PERCS paves the way for these conversations by increasing radiologists’ ease and confidence with patient interaction, she elaborates.

PERCS-Radiology participants arrive early in the morning and, over the course of the day, learn to talk with patients about three important topics:

Despite diverse topics, the day’s main objectives remain to enhance the competence, confidence, and comfort of the learners. “We talk about verbal and nonverbal ways of communicating — such as tone of voice, body posture, and eye contact — and the fact that one size does not fit all,” says Brown. “Not every provider is going to be comfortable with certain things, like physically touching a patient to comfort them, and not every patient is going to respond the same way.”

So far, participants have given positive feedback about PERCS’ effect on their daily practice. “Participants report that they feel better and are more prepared to have difficult conversations,” says Meyer. “They have some concrete communication skills and are better able to establish trustworthy relationships with patients and families.”

For radiologists who would like to get involved in PERCS or similar training, Brown also ran a PERCS-Radiology refresher course at last year’s RSNA annual conference and plans to do so again in November 2013. “In the spirit of the RSNA grant, we’re doing what we can to disseminate this model,” Brown emphasizes. “We are trying to partner with professional organizations and put on workshops in educational forums nationally. We’re hoping people from around the country will see its value.”

Members of the Association of Program Directors in Radiology may now access some of the PERCS materials online. Sign in at www.apdr.org  and click “Milestones Resources.” For additional information regarding PERCS-Radiology, or questions about implementing similar workshops at your practice, please contact Brown at stephen.brown@childrens.harvard.edu. To learn more about ACR Imaging 3.0, visit http://bit.ly/ACRImaging3 .