One radiology practice has developed a dense breast radiology consultation service for patients who might be at higher risk for breast cancer.
Get a PDF version of this Case Study
Download
Imagine a patient who, after receiving a mammogram, is handed a letter that tells her she will need additional screening because she has dense breast tissue. Without any idea of the options at hand, such a statement can cause a great deal of anxiety. One group of radiologists at Weill Cornell Medical College/NewYork-Presbyterian Hospital in New York City has found a way to minimize patient unease by developing a dense breast radiology consultation service for those who have been told, as required by recent legislation, that they may be at higher risk for developing breast cancer due to dense breast tissue. The goal of this consultation service is for radiologists to explain what this information means and discuss what options are available to an apprehensive patient. When laws impact how a radiology group should relay information of concern to its patients, adopting a supportive stance in the early stages of communication can be crucial. 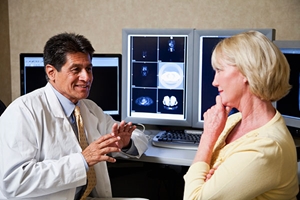 Increased breast density is not only a risk factor for breast cancer but also decreases the effectiveness of standard screening through mammography. Patient-led advocacy groups have increased awareness of these risks and limitations. The “Are You Dense?” initiative was spearheaded by Nancy M. Cappello of Woodbury, Conn. who was not aware, during earlier mammograms, that she had dense breast tissue and the possible impact it would have on the reading of her images. Later in her care, an ultrasound revealed dense tissue had been camouflaging a tumor, and she was subsequently diagnosed with stage 3c breast cancer. The topic garnered national attention when others with dense breast tissue also discovered that their breast cancer had remained undetected and, thus, untreated. Their action led to a law being passed — initially in Connecticut in 2011 and now active in 19 states, including New York — that requires mammogram providers to provide a lay letter to patients with dense breast tissue, urging them to discuss additional screening options with their referring physician or radiologist. Legislation has been proposed in Congress to make such notification a federal standard.

“The consultation service allows Weill Cornell radiologists to connect with patients who have questions, which is really Imaging 3.0TM in action,” states Geraldine B. McGinty, MD, MBA, FACR, assistant professor of radiology and assistant director of the Physician Organization at Weill Cornell Medical College. “The dense breast legislation is well intentioned, but has confused many patients. The Weill Cornell consultation service provides a friendly and accessible way for patients to get answers to their questions.”

Hentel agrees that although the legal notification provided valid information, there was a lack of definitive recommendations for patients wondering what they could do next. “It also places the responsibility of determining the optimal follow-up on referring physicians, many of whom do not have any expertise in breast imaging,” he says. “This may result in necessary follow-up not being performed or unnecessary tests being ordered. Physicians want to practice evidence-based medicine. However, there are areas with gaps in the evidence, and this was one of them.”

Patients who are told they have dense breast tissue are provided a contact number for the consultation service that is embedded in a tailored lay letter, as well as in handouts and cards distributed in the medical office. Those who choose to call the free consultation service initially discuss their case and concerns with a registered radiologist assistant (RRA), a mid-level provider with advanced training in radiology, who provides the patient with information. The RRA practices under the direct supervision of a radiologist to enhance patient care in radiology. All RRAs have a master’s degree and prior certification as a radiologic technologist. Consultations can be done over the phone or in person and, if a patient needs to or wants to talk with a radiologist, the RRA schedules the meeting. “I think people worry about patient interaction taking time,” Hentel observes. “These patient interactions do not take a lot of radiologist time; most discussions last about five minutes. There is a large benefit to our patients for the small amount of effort put into these dense breast consultations.”

“Patients who have called us have responded very positively,” says Courtney Sullivan, RRA at Weill Cornell’s department of radiology and the point person for patients in the department’s consultation service. Together with the patient, Sullivan reviews the New York State dense breast law, the mammogram results, personal or family health histories, and any other risk factors that may be present. They discuss additional screening options, such as breast ultrasound and screening breast MRIs, in detail, including associated risks, benefits, and potential costs. “Ultimately, the decision to have additional screening for dense breast tissue is optional, but it’s our job to provide enough information and support for patients to make an informed decision. Some of them go on to have additional screening. Others choose not to do so, but they can feel comfortable making that decision, either way.” 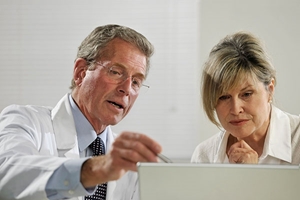 Before a patient meets with a radiologist, Sullivan compiles all the relevant information. “This allows the radiologist to formulate what needs to be done before speaking with the patient,” explains Hentel. “It’s a very efficient use of a radiologist’s time. After the consultation, our RRA ensures that the referring physician is notified and that the recommendations we make are followed up. We work with our patients and referring physicians to come up with a plan. Many of our patients opt not to receive additional imaging, but the fact we’ve taken time with the patient, reassured her, and discussed what her choices are shows how the consultation service is really improving patient care.”

Both Hentel and Sullivan emphasize the importance of documenting the radiology consultations by using a consultation note template that is entered into the patient’s chart. “We may have all the expertise in the world but, unfortunately, in today’s reality, if no one knows about it or if you haven’t documented it, it might as well have not happened,” Hentel points out. “As the health care system moves away from a fee-for-service model to a bundled care or episode of care model, we need to document all of the effort we provide in the care of the patient.”

“In the past, radiology consultations have taken place in a reading room, and there really hasn’t been documentation regarding collaboration with referring physicians or if the radiologist has been involved in certain aspects of the patient’s care,” Sullivan explains. “Now we can track all the decisions that are being made between the patient and the radiologist, as well as between the referring physician and the radiologist. Our goal is to make sure all interactions are captured in a patient’s chart for continuity of care and to demonstrate the added value we are providing.”

The team at Weill Cornell continues to study the long-term effects of the consultation service on its patients and regularly follows up via patient satisfaction surveys. Patients have responded enthusiastically to the service. When patients were asked if they felt that they had enough support and advice to make a choice regarding additional screening options, one patient responded, “Everything was clearly explained, and any concerns were addressed with care.” During consultation, another patient expressed her appreciation and stated she plans to schedule her follow-up appointments now that she is clear about what is happening.

Because of the dense breast consultation’s observed success, radiologists at Weill Cornell have expanded their consultation services to additional areas where the expertise of the radiologist can lead to improved care. For now, they continue to enhance and improve their current service, increasing their visibility while serving the needs of their patients. “I think dense breast consultations are a small but achievable step for radiologists to interact with patients and referring physicians to improve the care of their patient,” says Hentel. “It’s a great way for a practice to start moving towards the goals of Imaging 3.0. What we’ve done is a good example of taking small steps to move your practice to where you need to be.”

“Your mammogram shows that your breast tissue is dense. Dense breast tissue is very common and is not abnormal. However, dense breast tissue can make it harder to find cancer on a mammogram and may also be associated with an increased risk of breast cancer. This information about the result of your mammogram is given to you to raise your awareness. Use this information to talk to your doctor about your own risks for breast cancer. At that time, ask your doctor if more screening tests might be useful, based on your risk. A report of your results was sent to your physician.”

In order to take steps toward creating a similar consultation service: