Radiology leaders are first movers in Vanderbilt’s training efforts to recognize and mitigate unconscious bias.
Get a PDF version of this Case Study
Download 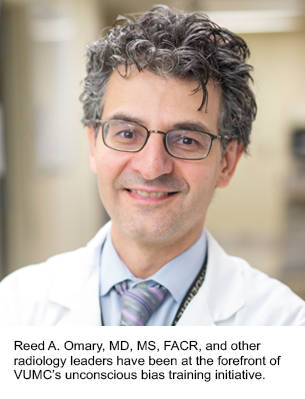 “I hope you like country music.” That’s what friends told Reed A. Omary, MD, MS, FACR, when he left Chicago to lead the radiology department at Vanderbilt University Medical Center (VUMC) in Nashville, Tenn. “That’s a perfect example of unconscious bias,” he says. “We may be known as ‘Music City,’ but health care is actually Nashville’s biggest industry.”

Unconscious bias is not limited to gender, race, or ethnicity. People can form stereotypes about any social group — whether we’re aware of such biases
or not. And these unconscious impressions about others can impact both our personal and professional lives, including hiring, managing, and interacting with team members, evaluating trainees, and providing patient care.1

As part of VUMC’s efforts to make diversity and inclusion intentional, the medical center is taking deliberate action to help its entire team better understand unconscious bias and mitigate its contribution to health care disparities. Beginning this year, VUMC is rolling out a series of unconscious bias workshops to over 20,000 employees — with volunteer trainers, including faculty members, nursing staff, and administrators, teaching the courses.

In 2015, VUMC’s Office of Diversity, under the leadership of André L. Churchwell, MD, senior associate dean for diversity affairs, developed a one-hour unconscious bias forum. Based on its commitment to diversity and inclusion, the medical center tapped radiology as one of the first departments to pilot the session. (Read “Diversity Matters” to learn more about how Vanderbilt’s radiology department is making diversity intentional.)

“Unconscious bias is universal. If we don’t recognize it, we may inadvertently make decisions that aren’t in the best interest of our patients,” says Omary, who is the Carol D. and Henry P. Pendergrass Professor and chair of radiology at VUMC. “Based on the impact of that first session, we quickly began creating a formalized approach to conduct unconscious bias training within radiology. Since then, we’ve taken a series of actions in parallel with the medical center’s rollout of this type of critical education. Radiology has been a first mover every step of the way.”

In 2017, the Office of Diversity turned the pilot into a one-day course on unconscious bias for deans and department chairs in the School of Medicine. During this in-depth session, Omary learned more about the impact of unconscious bias and concluded that ongoing unconscious bias training would be a key departmental focus.

Toward that end, he turned to Spottswood, who heads radiology’s Office of Diversity, Equity, and Inclusion, to develop a program. “Unconscious bias training is a supportive leg of our radiology diversity initiative,” she says. “We know that if we want to diversify, we need to help our residents and faculty recognize and respond to their unconscious biases. So, we solicited help from the Vanderbilt medical center team to guide us in providing that training.”

Spottswood immediately reached out to Arie L. Nettles, PhD, NCSP, HSP, founding director of the Office of Inclusion and Health Equity (OIHE) in the Vanderbilt pediatrics department, who developed a flagship program to educate and train the workforce on cultural awareness and the elimination of health care disparities. The OIHE program was expanded to the Vanderbilt University Hospital in 2016.

“At Vanderbilt, whether you do heart transplants or plant flowers, we will make sure that you’re culturally aware and culturally sensitive,” Nettles says. “By learning how to identify and confront unconscious bias, it is possible to mitigate its impact and promote respect for all groups.”

Spottswood had already been holding short courses for departmental faculty and trainees to instill an understanding of the importance of diversity and inclusion and to enhance radiology’s ability to deliver culturally proficient medical care to patients. In 2016, she added unconscious bias training to the mix.

According to Nettles, who is also associate professor of clinical pediatrics at Monroe Carell Jr. Children’s Hospital, “The radiology leaders have been true diversity champions; they are movers and shakers,” she says. “It’s been exciting to work hand-in-hand with such visionaries and advocates to get this training rolled out to their team. They have been instrumental in moving this critical piece of education forward and ensuring it continues.”

Since then, Spottswood has instituted unconscious bias workshops to help everyone in radiology recognize that unconscious bias is universal and that it can have negative consequences, if left unchecked. Over a half-day session, the training covers several key topics:

• The nature of unconscious bias and how it influences behavior

The response from team members has been overwhelmingly positive, Spottswood says. “People are surprised to learn that we all have blind spots, and they are unaware how these unconscious biases might affect our everyday actions as we care for patients. By raising awareness, it ignites a mental shift, and then you begin launching specific programs to create a cultural shift.”

Eleby R. Washington IV, MD, a radiology resident at Vanderbilt, is one of those who had an eye-opening learning experience. “As a radiologist, the unconscious bias training helped me recognize that, although I am a person of color, I have unconscious biases that I must acknowledge. To mitigate such biases, I need to pause and pay attention to what may be happening, slow down my decision-making, and constantly monitor myself when presented with cultural stereotypes.” 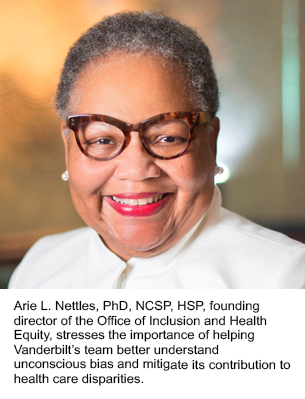 “We wanted to make a statement that this training is so important that we made it part of our clinical faculty’s variable compensation plan,” says Omary. “Compensation should not just be about clinical productivity. It should also be about quality and professionalism.”

Spottswood adds, “At Vanderbilt, a small portion of our salary is variable compensation — where if we do things like attend certain seminars, it’s reflected in our paychecks. There’s positive reinforcement for doing the right thing. Plus, we gave CME credit as an added motivator.”

The incentives paid off. The first session was standing room only. Radiology achieved 100 percent attendance among faculty and residents taking the unconscious bias class.

Of course, not every radiology practice has the ability to offer CME or compensation to incentivize attendance at unconscious bias training. For those organizations, Omary has a few words of wisdom: “Just do it. Don’t spend a lot of time trying to make a perfect plan or come up with a long-term strategy. Get started and grow it incrementally. And make unconscious bias training an ongoing process rather than an event, so that it stays in peoples’ thoughts.”

VUMC is taking these steps on a global scale by providing unconscious bias training for all 20,000-plus employees. As part of this effort, the medical center recently held a four-day train-the-trainer program. The session prepared 16 VUMC team members to deliver a workshop for colleagues that explores how unconscious biases develop, how they influence perceptions and decision making, and how to mitigate these effects.

Spottswood was among those who the dean’s office selected to become a trainer. “We don’t want anyone to be unaware that they have unconscious bias. The train-the-trainer program will give us that universal reach.”

Nettles, who is spearheading the VUMC-wide training effort, says it’s all about getting everyone in the medical center to begin making the unconscious conscious. They have begun collecting data about patient satisfaction related to unconscious bias to see if the training is making a difference.

“I applaud the progressive nature of my institution,” Nettles says. “We hope we can be a model, not only for academic institutions, but for medical practices everywhere to see that there are actionable steps everyone can take to reduce unconscious bias and eliminate inequities in patient care.”

Battling Blind Spots by American College of Radiology is licensed under a Creative Commons Attribution-NonCommercial-NoDerivatives 4.0 International License. Based on a work at www.acr.org/imaging3. Permissions beyond the scope of this license may be available at www.acr.org/Legal.