A Michigan-based radiology practice is using Imaging 3.0® as a framework to develop its nontraditional strategic plan.
Get a PDF version of this Case Study
Download 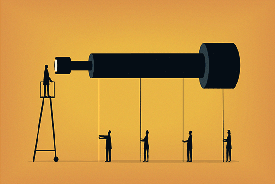 Simply hearing the phrase “strategic planning” is enough to make some people break out in cold sweats. They envision being locked inside a conference room for days on end, toiling over lofty goals and eventually emerging without a tangible output to show for their work. But one Michigan-based radiology practice is using an unconventional strategic planning approach to overcome these aversions and implement the principles of Imaging 3.0™.

Grand Traverse Radiologists, PC, a private practice with 21 radiologists based in Traverse City, Mich., began purposefully implementing Imaging 3.0 concepts after hiring Jennifer K. Coleman as executive director in 2006. Although the practice had conducted strategic planning sessions in the past, the resulting plans were not comprehensive. So Coleman evaluated the regional competitive landscape to understand where the marketplace and industry was headed and what Grand Traverse could do to remain at the forefront of imaging in the future. From that analysis, Coleman determined that Grand Traverse could further distinguish itself from its competitors in several ways, many of which correlated with the ACR’s Imaging 3.0 initiative when it launched in 2012. “I read through the Imaging 3.0 website and found that it was a good fit, because it provided a practical framework that we could use to meet the demands of the changing marketplace,” Coleman says. Grand Traverse has a long history of physician leadership and already had several initiatives in place that aligned with Imaging 3.0 principles.

The practice had strong relationships with its contracted facilities and provided patients with educational materials about their imaging exams through RadiologyInfo.org, Coleman notes. But Imaging 3.0 outlined several additional value-added concepts that the group hadn’t yet pursued, including participation in the ACR Dose Index Registry™ (DIR) and adoption of ACR Select™, a clinical decision support tool. Coleman wanted practice leaders to discuss Imaging 3.0, but they were unenthusiastic about participating in strategic planning sessions based on their past experience. So instead, Coleman worked with the practice’s executive leadership to establish a work group that meets regularly to hash out challenges and set priorities for advancing the practice. “I try to do it in small educational bites as opposed to sitting down and formally doing a strategic planning session,” she says. The brief meetings keep members engaged and facilitate program implementation better than drawn out strategic planning sessions.

Coleman began encouraging Grand Traverse’s leadership to implement Imaging 3.0 principles approximately three years ago, but she didn’t want to overwhelm the practice with intense strategic planning sessions. As she searched for another avenue for the discussions, Coleman found that the group’s bylaws would permit a work group dedicated to such issues, and with the governing board’s approval, a dedicated strategic planning group was identified.
The group comprises the practice’s five-member executive committee and three younger radiologists whose perspectives are particularly valuable since the topics the committee tackles will impact the future of the practice, Coleman says. Additional shareholders are invited to join the group for discussions about topics that they are particularly interested in or experienced with.

During the meetings, the group receives information about everything from marketplace trends to federal directives (such as the ICD-10 switch), and, of course, Imaging 3.0-driven efforts. The conversations raise awareness about potential challenges on the horizon and allow members to think strategically about solutions, looking at each situation from multiple angles without the pressure of having to make immediate decisions. “I’ll tell them the issues, and we’ll discuss ‘what-if’ scenarios,” Coleman explains. “If they have time to think about issues and challenges, knowing that we will discuss them further the next time we meet, the process is much better than if we tried to do it all in one sitting.”

When a strategic initiative or Imaging 3.0-specific project arises, Coleman asks for a volunteer to “champion” the effort. The champion guides the implementation of the initiative through informal discussions with practice partners, touting the benefits of the effort and encouraging everyone’s participation. Coleman says that the approach can generate buy-in faster than if she presents all of the initiatives to the shareholders herself. For instance, when the group decided to participate in the DIR, the champion, Patrick Gartland, MD, worked with Coleman to get everyone on board in less than a month so that the practice’s new CTs could be configured for the registry during installation. “The DIR allows us to more closely and efficiently monitor our dose indices to ensure that we are in line with national values,” Gartland says. “We plan to use the data for future Practice Quality Improvement initiatives and optimize our CT protocols to ensure our patients receive safe, quality imaging.”

Among other Imaging 3.0-driven efforts, the group recently spearheaded an ACR Select pilot study. ACR Select is a web-based clinical decision support tool that uses the ACR Appropriateness Criteria® to rank the appropriateness of imaging exams at the point of order. Grand Traverse’s radiologists were eager to see whether the tool would help ordering physicians choose appropriate imaging exams, how the approach would compare with the traditional “pre-authorization” process, and whether it would lead to increased communication between ordering physicians and radiologists, as expected. Grand Traverse presented the idea for the pilot to a regional physician organization, Northern Physicians Organization, which helped design the study and recruit referring physicians to participate in the month-long pilot that concluded in September 2014.

Abbigale J. E. Wilson, MD, family physician at Traverse City-based Bay Area Family Care, was among 10 referring physicians who participated along with two radiologists who used the tool to protocol outpatient CTs and MRIs. During the pilot, Wilson used ACR Select on a laptop while in the exam room with her patients. She entered the patients’ clinical information, and the tool immediately indicated whether the exam she chose was the most appropriate. When Wilson or any of the other participants had questions about the tool or imaging appropriateness, Grand Traverse’s radiologists were available to help. Wilson says that ACR Select takes the guesswork out of ordering imaging exams and should replace the cumbersome prior-authorization process that payers currently require. “Hopefully enough data will be collected from the study to show that doctors who use the tool order the appropriate tests, so there’s no reason to question their decisions with prior authorizations,” Wilson says. 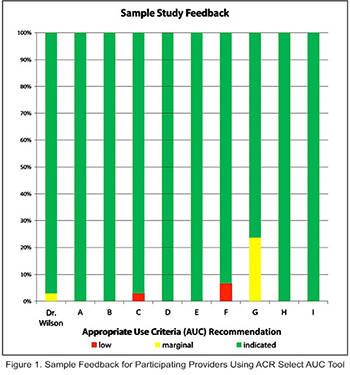 Grand Traverse is evaluating the results of the study and will publish them soon. Its radiologists also plan to meet with payers to discuss replacing the pre-authorization process with ACR Select. During those discussions, the group will present data like that in Figure 1, which illustrates the type of feedback that Grand Traverse can give to ordering providers who use ACR Select. The feedback allows providers to see how they compare with their ordering peers. Those who have a higher percent of low (red) or marginal (yellow) studies compared to their peers can reach out for further education about appropriate ordering. Radiologists can also use the data to see which providers are struggling with appropriateness and then provide those physicians with additional assistance. “By measuring adherence to nationally accepted, evidence-based imaging guidelines, we are able to focus on making sure the appropriate imaging services are delivered to each patient,” says Michelle Lung, MD, president of Grand Traverse Radiologists, PC.

While Grand Traverse is taking a “bite-sized” strategic planning approach, its efforts have led to big accomplishments. The practice distributes clinically based newsletters to its referring physicians, which highlight its value-added efforts through radiation safety, additional interventional therapies, and new equipment and techniques. “Our radiologists are committed to improving quality and building relationships to show that they’re more than just a name on a report and that they care,” Coleman says. “Using this informal strategic planning approach we have been able to increase our Imaging 3.0 efforts and position ourselves better for the era of value-driven care.”

Radiology practices that want to follow Grand Traverse’s lead and use informal strategic planning to achieve the objectives of Imaging 3.0 should: