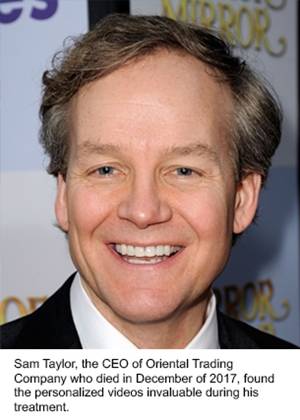 Editor’s note: As this article was in production, our source and friend Sam Taylor was in the final stages of his disease and passed away on December 28, 2017. His wife, Stephanie, wanted this story told as part of Sam’s legacy. “I don’t feel like cancer beat him. He never lost hope,” she says.

Sam Taylor, CEO of Oriental Trading Company in Omaha, Neb., experienced blind spots in his vision during a family vacation in Mexico in October of 2016. Upon his return, a visit to the eye doctor yielded no explanation. However, a subsequent MRI showed a mass of the worst kind: grade IV glioblastoma multiforme (GBM). “They told me I had 15 months to live,” Taylor recalls. “I felt like I got kicked in the gut.”

The father of three moved to Houston for treatment at the University of Texas MD Anderson Cancer Center, where he underwent laser interstitial thermal therapy surgery, followed by a six-week chemotherapy and radiation standard-of-care regimen. The emotional trauma for Taylor and his family, the uncertainty of treatment options, and the pure overload of self-directed disease research was overwhelming.

“As a GBM patient, you’ve been given a pretty dire prognosis, and you’re fighting for your life,” says Taylor, who created a YouTube channel  in hopes of uniting the world in the battle against cancer. “You just want information, but the diagnosis and treatment often seems unclear, and physicians aren’t always forthcoming with the information patients want to know.”

Taylor’s experience isn’t unique. In fact, his doctor, Caroline Chung, MD, assistant professor and director of MR research in MD Anderson’s department of radiation oncology, says many patients feel added stress as they work to comprehend their complex diagnoses and treatments and try to share this information with their family and friends.

To help, Chung and her colleagues have developed personalized patient-facing videos that explain the expected symptoms during radiotherapy in relation to their brain MRI findings and their radiotherapy plan — and, so far, the reviews are positive.

“Until I saw that video, I didn’t fully understand or appreciate the science of radiation therapy,” Taylor explains. “Patients are under a lot of stress, especially before viewing imaging results — ‘scanxiety,’ it’s called. Patients often feel better when they have a greater understanding of their disease and treatment. It definitely helped me.” 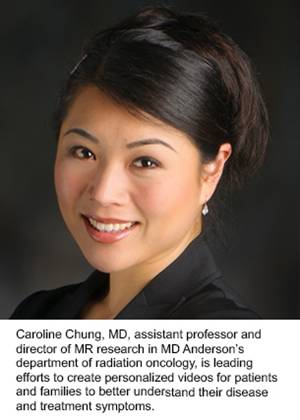 The videos go beyond how physicians traditionally educate glioblastoma patients about their disease and treatment.

Typically, physicians give patients informational pamphlets that detail an exhaustive list of potential symptoms over time. But each radiation treatment plan is different: Radiation is a local treatment that is aimed at regions of visible tumor and regions of potential microscopic spread. Therefore, most patients won’t experience every side effect listed in the pamphlets.

This “exhaustive list” approach to patient education can lead to more questions than answers and can exacerbate anxiety in patients and caregivers, Chung says. “If patients knew specifically what symptoms to expect for their unique situations, we’d be providing not only education, but hopefully a way to relieve some anxiety surrounding the unknown,” she says.

To that end, Chung began creating short, personalized videos to educate glioblastoma patients about their specific tumors and possible symptoms. A neuroradiologist dictates the cases in the videos, providing clinical expertise in patient-friendly terms to alleviate anxiety.

Chung has kicked off her program by selecting candidates from MD Anderson Cancer Center’s glioma population — patients with tumors that originate in the glial cells of the brain or spine.

She provides radiation therapy plans with detailed dosimetry information to L. Anne Hayman, MD, emeritus professor of neuroradiology at MD Anderson, who reviews them along with MRI findings.

Hayman prepares a dictated narrative about functional components of the brain impacted by both the tumor’s size and location and the prescribed radiation treatment. The two-minute videos, which utilize advanced image processing, also address possible areas of inflammation or complication in the brain.

Hayman has enlisted the help of medical students and assistants to edit and assemble the final narratives within 48 hours of onsite recording, and the digital videos are shared either electronically or in person with patients.

“Radiation is a local therapy, but it’s a nebulous concept to many people,” Chung says. “With the videos, we can actually show patients which portions of their brains the radiation affects. It’s a visible and more concrete way of explaining their conditions. As they say, a picture is worth a thousand words.”

Taylor agrees that seeing exactly where the treatment will be applied is helpful, especially for visual learners.

“You see your brain, you see your tumor, and they show you your radiation plan,” Taylor says. “The video even described areas that Dr. Chung wanted preserved, like where my long-term memory lies. That really resonated with me.” 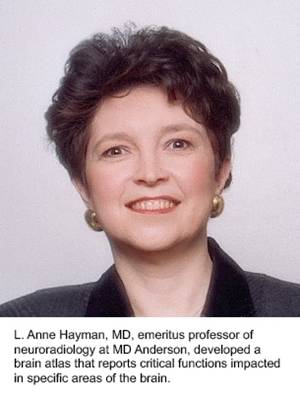 In dictating the personalized videos, Hayman enhances presentation of the MRI findings with brain atlas software that correlates affected brain regions to specific patient symptoms or side effects, creating one integrated image for illustration purposes.

Hayman, a neuroradiologist who is also the founder and medical director of Anatom-e Information Systems, spent years developing this digital atlas of tumor location information to help physicians give patients exactly what they wanted: a succinct report about how their tumor and its treatment would impact their brain.

Hayman says that patient understanding drove her to develop the atlas. By explaining how the treatment “attacks” a tumor, the patient and care team can engage in frank dialogue about patient needs and wants regarding life after treatment.

For example, one patient told Hayman that she’d rather die than lose her vision, so the radiation therapy team took strict measures to preserve the fibers central to her sight during a treatment near the pituitary gland.

“We made something people could understand quickly,” Hayman says. “What they want to know is, ‘What will my future be like?’”

Hayman analyzed 1,250 cases of glioma at MD Anderson to create the atlas and categorize patients’ tumors. Using data on tumor location and vein anatomy, she discovered a logical way to categorize tumors and recall the outcomes for previous cases of that type.

The atlas also reports the critical functions that are impacted in each specific area of the brain. It’s a dramatic improvement over the traditional pamphlet method of educating patients about the broad range of functions threatened by gliomas.

“The amount of functional detail in the atlas is beyond what most physicians could know off the top of their head,” Chung notes. And now it is being communicated in a concrete, simple, and relevant way directly to patients.

In the information era, patients want to know more and expect to be able to take this information mobile, Chung adds. “While some practices are using only traditional modes of communication, we need to be creative in the world we live in and use all the tools we have available to us.”

Chung says that anecdotally the videos have shown that they improve patient care and satisfaction, but she plans to launch an official pilot program to quantify the videos’ impact.

Chung is awaiting Institutional Review Board approval to initiate the pilot with funding from a Hackett Family Foundation grant. She plans to launch a randomized, prospective trial of 30 glioblastoma patients to measure patient anxiety levels before and after watching the videos.

After the pilot study is complete, additional studies will compare responses of video-educated patients and their families with those who received traditional communications. The authors hypothesize that videos can save the staff time by answering the patient’s questions and addressing the family’s concerns.

The videos are expected to improve patient satisfaction and elevate the level of interaction between patient and physician. Still, Hayman notes, this new type of patient-directed reporting would require new curriculum during radiologist training, which currently focuses on differential diagnosis rather than the real-world meaning of imaging findings.

Visual Learning by American College of Radiology is licensed under a Creative Commons Attribution-NonCommercial-NoDerivatives 4.0 International License. Based on a work at www.acr.org/imaging3. Permissions beyond the scope of this license may be available at www.acr.org/Legal.