A Texas-based practice offers a successful free lung cancer screening program.
Get a PDF version of this Case Study
Download 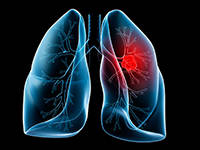 Getting screened for a frightening disease like lung cancer doesn’t always top a patient’s to-do list — even if he or she meets the risk factors suggested by the U.S. Preventive Services Task Force (USPSTF). Since December 2013, the USPSTF has recommended that adults between 55 and 80 with a “30 pack-year smoking history and who currently smoke or have quit within the past 15 years” obtain annual lung cancer screening with low-dose CT.1

David A. Saldaña, MD, thoracic and breast radiologist at Radiology and Imaging of South Texas, LLP, in Corpus Christi, Texas, noticed that — whether because of fear, financial woes, or lack of awareness — the surrounding population was not proactive about getting screened. “In the line at the corner store, I’ve noticed a large number of both old and young people buying cigarettes,” notes Saldaña. Radiologists at the practice, however, were only screening 10-20 patients per month for lung cancer.

“I have personal experiences with lung cancer,” says Saldaña. “My wife’s grandfather died from lung cancer in my third year of medical school. It’s a harrowing experience, and it creates tremendous fear and anxiety.” Noting the large number of local smokers and the few screenings, Saldaña suggested a forward-thinking, even radical, idea to his colleagues: Why not offer lung cancer screenings for free during July of 2014? The goals were multifold: raise awareness among smokers and raise the practice’s visibility, while also saving lives. The other leaders of the radiology practice quickly agreed to give the concept a try.


Getting the Word Out

According to Saldaña, the practice decided to offer the free screening program because of its far-reaching benefits to patient care. “CT lung cancer screening is really much more effective than plain radiographs and helps reduce mortality from lung cancer,” he explains. Furthermore, since Medicare doesn’t yet cover CT lung screening, it made sense to offer this particular service for free.

To generate interest in the free screening program, the group put up a full-sized billboard just off of one of the major highways, stating that lung screening would be free in July. The advertising efforts boosted the number of screens in July to about 80–90, according to Saldaña. Because of the program’s success, the practice offered free lung cancer screening again in August 2014.

This experiment had important benefits. “We’re catching large and small cancers here,” Saldaña says. “Not everything is a highly advanced lung cancer. Like with any good screening program, we recommend follow up to make sure there’s no change in the nodule size. By communicating results with the primary physician through fax or, whenever possible, direct phone calls, we can ensure patients get appropriately biopsied. I really think this program can make a difference in smokers’ or previous smokers’ lives in Corpus Christi.”

Besides catching cancers early on, the free screening program has also helped increase awareness of the importance of lung cancer screening for at-risk patients. “By making screening information available [on the billboard] to the public, they know they can proactively take control of their health care,” Saldaña explains. Plus, Saldaña says, “By offering free screening, it opens people’s eyes and improves our reputation among patients and referring physicians. I think it helps physicians realize radiologists have a genuine stake and interest in patient care.” In this sense, the results are aligned with the Imaging 3.0™ mission to demonstrate radiology’s value within the entire health care paradigm.

In an attempt to demonstrate this value, Saldaña says the practice is currently applying to become an ACR Lung Cancer Screening Center . The program requires that practices receive ACR CT accreditation for the chest module as well as meet specific equipment, personnel, and imaging protocol requirements. By becoming one of these centers, both patients and providers will know that the practice is committed to safe, effective screening exams. Additionally, Saldaña hopes to replicate the practice’s best breast cancer screening practices, such as having radiologists provide results directly to patients and notifying patients immediately if a biopsy is needed. “Once I have a breast pathologic result, I call patients directly,” says Saldaña. “Whenever I’m about to do a biopsy, I’m honest and tell patients exactly what I think we’ll find … I would like to know we’re at the forefront of lung cancer screening, too, while providing patient-centered services.”

As far as recommendations for other practices that want to establish their own free screening programs, Saldaña suggests working to advertise directly to patients. In addition, he emphasizes thinking about outside-the-box benefits and the ways in which a free screening month can improve a practice’s reputation and provide value. “I think the program has been very well received both by clinicians and patients,” says Saldaña, who is optimistic that the practice could offer the free screening program again in the future.