A Direct Line to Radiologists

Radiologists in Colorado are adding their phone numbers to radiology reports, making it easier for referring physicians and patients to reach them for consultation.
Get a PDF version of this Case Study
Download 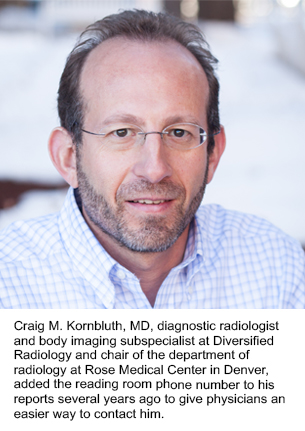 When surgeon Kimberly Vanderveen, MD, orders imaging studies for patients at the Denver Center for Endocrine Surgery, she often speaks directly with radiologists to discuss their interpretations. But getting in touch with them hasn’t always been easy. For years, locating a case’s interpreting radiologist required a lot of effort.

“It’s incredibly helpful to have conversations with radiologists about subtle impressions that are difficult to explain in a report,” says Vanderveen, who is also medical director of Rose Medical Center’s Thyroid and Parathyroid Center. “But talking to them usually required me to make a bunch of phone calls or to go to the hospital to track them down.”

When Craig M. Kornbluth, MD, a body imaging subspecialist with Diversified Radiology and chair of the radiology department at Rose Medical Center, heard that referring physicians like Vanderveen were having trouble getting ahold of the radiologists on his team, he decided to address the issue. To make it easier for clinicians to reach him with questions, Kornbluth started including the reading room phone number in his reports about 10 years ago.

Since then, this simple initiative has gradually spread across Diversified Radiology’s entire practice. Now, all 60 radiologists in the practice list a phone number in their reports, making themselves more accessible not only to referring physicians but also to patients — resulting in more collaborative care.

Kornbluth got the idea to insert the reading room phone number into his reports from a consultation note that another specialist sent to a primary care physician. “It basically said, ‘Thank you for allowing me to care for your patient. If you have any questions about my report, please call me at this number,’” Kornbluth recalls.

Kornbluth appreciated this verbiage because it accomplished two things: First, it expressed gratitude in a collaborative tone, and second, it offered an easy way for referring physicians to reach out.

Recognizing the strategic nature of this simple gesture, Kornbluth added a similar message to the end of his reporting template, and referring physicians immediately responded favorably. “Doctors said they could get in touch with me faster because the number was right in the report,” Kornbluth says. “They didn’t have to look through a Rolodex or dial through a phone tree, so the feedback was universally positive.”

The initiative was especially valuable to referring physicians outside of Denver who send patients to the hospital. “Rose is a regional referral center, so a lot of patients come from several hours away,” Vanderveen says. “These ordering physicians might not have a direct line to the radiology department here. Offering access to the radiologist who read their patient’s report is great customer service.” 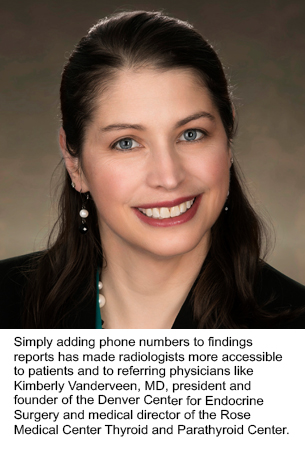 Once Kornbluth started getting positive feedback from referring physicians, his colleagues took notice. He asked the other four body imaging subspecialists in his group to include callback numbers in their reports, and the positive feedback multiplied.

The team shared this feedback throughout the practice and the broader radiology community. Jennifer L. Kemp, MD, FACR, body imaging specialist and vice president at Diversified Radiology, talked about the group’s accessibility initiatives at national Radiological Society of North America meetings, and even gained coverage  in The New York Times.

“The positive press coverage validated it and spurred other radiology practices across the country to include phone numbers in their reports, too,” says Marc Sarti, MD, body imaging subspecialist at Diversified Radiology. “Members of our practice became much more open to providing their phone numbers when they saw other radiology groups doing it, too.”

On top of that, Diversified Radiology’s board of directors asked Kornbluth to speak at the company’s annual retreat about how the team at Rose was earning the highest referring physician satisfaction scores in the practice — which increased from about 85% in 2009 to 95% by 2014. Kornbluth explained that the phone number inclusion effort was one of several customer service initiatives that helped improve relationships with referring physicians and increase the group’s high satisfaction scores.

These results encouraged more of the group’s radiologists to add their contact numbers to their reports. “The initiative gained momentum over time because radiologists just realized it was the right thing to do,” Kornbluth says.

Referring physicians have appreciated the effort, and Diversified Radiology’s satisfaction scores have continued to climb — reaching 98% in 2018. “The radiologists’ accessibility has been fantastic,” Vanderveen says. “Now that they publish their phone numbers in their reports, I don’t have to go through five other steps to get ahold of the interpreting radiologist. This initiative has greatly improved the trust and speed of communication between our teams.”

The phone numbers initially made the radiologists more accessible only to ordering physicians, who were the sole recipients of the reports at the time. But since then, Diversified Radiology’s contracting hospitals have rolled out patient portals that give patients access to their reports — essentially opening the phone lines to patients, too.

Knowing patients would have access to the phone numbers made some radiologists nervous at first. “Our radiologists enjoy the diagnostic role of conversing with other clinicians, but some of them were uncomfortable injecting themselves into direct patient care,” Kornbluth says. “They were concerned about being inundated with phone calls from patients, but that hasn’t been the case.” 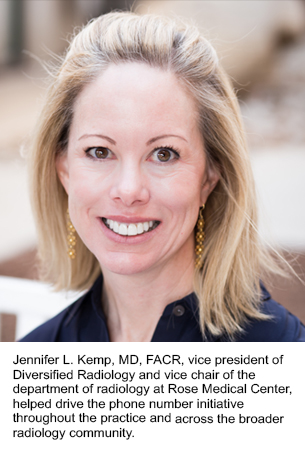 Other radiologists worried that talking with patients directly about their findings would infringe on the ordering physician’s role. “I was a little uncomfortable because I had previous instances at another hospital where I talked with patients who called about their results, and the response from referring physicians was unfavorable,” Sarti says. But he soon realized that those concerns were overblown — especially at Diversified Radiology, where radiologists have built strong relationships with referring physicians over time.

The most common calls that the radiologists receive, from referring physicians and patients alike, ask them to simply explain abnormalities noted in their reports. “‘Benign lesions in the liver and kidneys’ sound very ominous if you don’t know what they are,” Kornbluth says. “I’d certainly rather have patients call me than search Google.”

When patient Robert B. Crew saw the report from his imaging exam, the results looked as foreign to him as Latin — so he called the number at the bottom and asked Kemp, who is also vice chair of the radiology department at Rose, to translate her findings.

“I was so impressed by her accessibility and her willingness to speak with me,” says Crew, a senior judge in the Denver County Court. “I’ve never talked to a radiologist before; usually, you don’t even get to see the report. Having her thoroughly explain her findings was a very positive experience for me. It gave me great comfort to get an immediate diagnosis, rather than waiting a couple of weeks for an appointment with my referring doctor.”

“The number of interruptions is minimal, so it hasn’t impacted my workflow at all,” says Sarti, who is also the medical director of radiology at Presbyterian/St. Luke’s Medical Center. “The rare times that you do get to talk to a patient, it can be extremely rewarding. It’s a good reminder that you’re not just reading films — you’re treating patients.”

Though patient calls are relatively infrequent, radiologists keep referring physicians in the loop about these conversations to ensure everyone is on the same page. For example, if Sarti speaks with a particularly concerned patient or discusses any significant findings, he’ll immediately call and include the referring physician. If patients ask about follow-up imaging, ongoing treatment, or other next steps, the radiologists routinely direct them back to their referring providers. 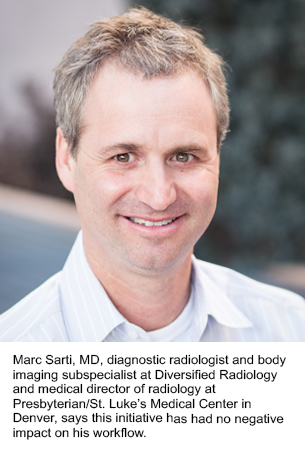 “The few times I do get calls from patients, I’m always careful about discussing their findings,” Sarti says. “I’ll say, ‘Here’s what I see, but you have to discuss these findings with your primary doctor because I don’t know how this will impact your treatment.’ If something significant is discussed, I’ll reach out to the referring doc immediately and fill them in.”

Ongoing collaboration and communication are keys to the initiative’s success and are pivotal to improving patient care. “If you don’t make it easy for referring physicians and patients to communicate with you, you can’t improve the quality of care,” Kornbluth says. “Radiologists were traditionally like the Wizard of Oz behind the curtain; nobody knew what we really did. This gives us a chance to educate patients about how important we are to their healthcare.”

Kemp shepherded the phone number initiative into a new phase two years ago, when she presented it to Diversified Radiology’s operations committee, which she chairs. The committee discussed how to effectively scale it from a voluntary effort to a group-wide standard without going so far as to mandate it. “We decided that we wanted to have a name and phone number at the bottom of every report, but we gave radiologists some leeway to decide which phone number to include,” Kemp says. “We set the expectation that all radiologists would comply.”

Kornbluth met individually with radiologists who were hesitant to share their phone numbers. He explained that this was an important customer service initiative for referring physicians and patients that other groups were starting to emulate. Those radiologists who didn’t initially comply weren’t necessarily against the idea; they were just reluctant to change their routines and their report templates. Over the past few months, the operations committee has developed several standardized templates for radiologists — all of which include contact information by default.

Now, almost all of the practice’s radiologists include contact numbers in their reports. Most use the reading room number while others list the number for the group’s internal assistant, who transfers callers directly to the interpreting radiologist who read the case in question. This seemingly small effort has been a critical step toward collaborating more effectively with referring physicians and consulting directly with patients.

“We’re starting to see more radiology practices adopt this because it’s just better for patient care,” Kornbluth says. “So much can be gleaned by talking to the referring physician and even the patient, from both a clinical excellence and a customer service standpoint. Asking them to go through phone trees or spend time looking up reading room numbers is really poor service, so it’s time to get on board.”

Hello Rounds by American College of Radiology is licensed under a Creative Commons Attribution-NonCommercial-NoDerivatives 4.0 International License. Based on a work at www.acr.org/imaging3. Permissions beyond the scope of this license may be available at www.acr.org/Legal.