Radiologists at Cincinnati Children’s Hospital engage patients and families through their blog.
Get a PDF version of this Case Study
Download 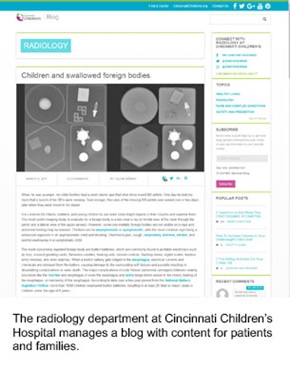 In 2014, with its Twitter and Facebook audiences steadily growing, the radiology department at Cincinnati Children’s Hospital Medical Center began working on the third component of its social media outreach initiative — a blog with content for patients and families .

Alexander J. Towbin, MD, associate chief of clinical operations and radiology informatics and head of social media outreach for the department, envisioned the blog as a resource for patients and families to better understand their care.

“The hope is that when parents search the internet for information about pediatric imaging, our blog will appear in their search results and help answer their questions,” says Towbin, who is also the Neil D. Johnson Chair of Radiology Informatics.

Towbin presented the idea to Brian Coley, MD, radiologist-in-chief at Cincinnati Children’s, and together they developed a plan for generating consistent, engaging content — the most difficult hurdle for managing a blog.

Towbin and Coley agreed to link the blog to an incentive bonus, where either all of the radiologists wrote for the blog or no one received the bonus. Initially, each radiologist was required to write two blog posts per academic year, with the goal of publishing 140 written blog posts and at least a dozen video posts, like this interview with Towbin , the first year.

“I thought engaging all of the radiologists in the project would get them thinking about their larger roles in the department and in patient care,” says Coley, who is also The Frederic N. Silverman Chair of Pediatric Radiology at Cincinnati Children’s Hospital and professor of radiology and pediatrics at the University of Cincinnati College of Medicine. “Plus, it provides an avenue for some of the radiologists who wouldn’t otherwise express themselves to have a voice.”

Towbin and Coley met with the hospital’s marketing department to discuss their plans for the blog. At the marketing team’s request, the radiologists agreed to make their blog a channel on the hospital’s blog rather than a standalone website, ensuring consistent messaging across the institution.

From there, Towbin emailed the department’s technologist team leaders and asked for volunteers to serve as blog editors.

The role involved a commitment of about two hours a week, one hour participating in a weekly editorial meeting and another hour editing articles. The editors would also write blog posts throughout the year.

“We wanted people who could write and who had an interest in promoting the department,” Towbin explains.

The team now comprises seven editors, including a media specialist, whose job is to develop educational and promotional materials for the department. While Cincinnati Children’s has a whole team dedicated to the blog, a smaller group could feasibly manage a blog with a few dedicated writers.

With the editorial team in place, Towbin and the group began discussing blog content. They brainstormed themes, including “How We Do It,” “Meet the Team,” and “Patient Stories,” and planned blog topics under those themes.

The team also developed a production process for the blog:

The editorial team collected a month’s worth of posts before officially launching the blog. “That way, we could go live and keep the editorial process rolling, always working a couple of months ahead,” Towbin says.

After the first year, several radiologists expressed concerns that writing two blog posts per academic year was too much on top of their existing workloads. They also requested the ability to choose their own topics rather than having topics assigned to them.

The editorial team agreed to reduce the number of blog posts each radiologist was required to write from two to one per academic year and to allow the radiologists to pick their own topics. Such changes helped radiologists buy into the project as an ongoing initiative, Coley says.

Since starting its blog three years ago, the radiology department has published more than 500 posts on topics ranging from “What is a functional MRI?” to Halloween posts that include picture sliders  a reader can move back and forth to reveal what candy looks like under X-ray.

This consistent content, which is publicized through the department’s Facebook  and Twitter  accounts, has increased the radiology department’s visibility in internet search results, and has engaged patients and families more closely in their care. For instance, one parent commented that her son got a lot of joy out of seeing the candy turn into an X-ray on the Halloween post.

“It’s these sorts of things that help make Cincinnati Children’s a leader in pediatric imaging and empower patients and families to make better decisions about their care,” Towbin says. “The more we do to educate patients and families about radiology’s role in health care, the greater our chances of improving patient outcomes.”