Radiologists can add great value by serving on a hospital ethics committee. 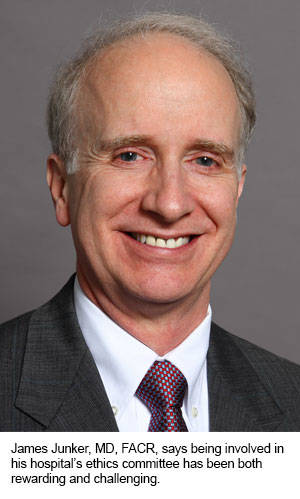 Last Christmas Eve, James A. Junker, MD, FACR, chief medical officer at Mercy Hospital Jefferson in Crystal City, Mo., was called in to assist with a terminally ill patient. In his early 50s, the man was dying of metastatic pancreatic cancer. As the patient was lying in his hospital bed, his brother, who happens to be a nurse and who had been granted power of attorney, struggled with what to do: Did his ill brother need more treatment? Or should he transition to hospice care?

As a member of the Mercy Hospital Jefferson Ethics Committee, Junker was asked to sit down and review the patient’s medical images with the brother. The images showed that the cancer had advanced significantly. As Junker explained the findings, the path forward became much clearer to the brother: “He decided to put the patient in hospice, and 48 hours later, the patient died peacefully.”

This is just one example of how radiologists serving on ethics committees can assist patients and their families at critical times. Because of the tremendous value radiologists can add to patient care, he says other ACR members should consider getting involved, too. Here’s why.

Hospital ethics committees serve multiple purposes. Jennifer Heyl, PhD, director of ethics at four Mercy Hospitals in the greater St. Louis region, says these groups are responsible for four main categories of care: consultation, proactive ethics screening, policy review and development, and education. For example, radiology participants in the committee may be called upon to consult about a difficult ethical case involving imaging or to help educate others about the ways in which imaging can play a role in decision making for patient care.

Heyl, who became interested in medical ethics at age 11 during the Roe v. Wade Supreme Court case, says ethics committees have traditionally focused on education. “Under this older model, ethics committees are large, multidisciplinary groups that meet on a regularly scheduled basis,” she explains. “Because of the timing of these meetings, the committees often discuss ethics cases in retrospect, with an accompanying educational piece that speaks to the ethics issues in that case.” This type of review can prepare the committee members for similar cases in the future; but perhaps more importantly, it can illuminate the need for a systemic change that might minimize or help avoid that situation in the future.

Now, a new type of ethics committee is beginning to emerge at many hospitals. These committees have a different focus: ethics consultation. While these teams tend to be smaller than their more traditional counterparts, they may still meet on a regular basis. The main difference is that they can also convene quickly to discuss ethics cases in real time and provide guidance to help make care decisions. That’s why Junker was called upon to intervene preemptively and provide guidance to a patient and his brother last Christmas Eve.

Reasons to Get Involved

Junker says that, like Heyl, he became interested in ethics early in his career. His interest stemmed from a medical ethics course that he took during college and also from his interactions with a close friend who was a moral theologian. The friend used to ask, “Whose needs are being served by this action or decision?” Junker found these questions fascinating and thought he could provide value by participating in ethical decision making in the health care setting. “It’s a unique privilege and honor, and a real sign of professionalism, to be able to help patients and families at very difficult times,” he says. 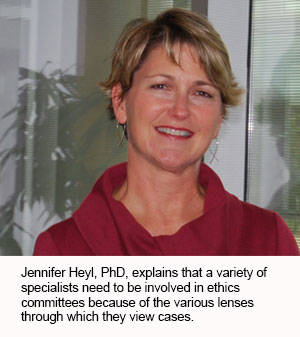 Junker says it’s a good way to have a meaningful impact that doesn’t require any additional training or unique skillsets. “Anyone can join. You will be called upon to help in cases that match your existing expertise,” says Junker, who also serves on the hospital’s Radiation Safety, Medical Care Appraisal, Credentials, and Medical Executive committees.

The time commitment for participating on an ethics committee can vary, depending on the hospital, but Junker says he spends about 2–3 hours each month doing ethics-related work. At Mercy Hospital Jefferson, the ethics committee meets quarterly for one hour. It also holds ad hoc meetings every week or two. Known as complex care committees, these meetings involve nurses, administrators, ethicists, and other physicians who convene to discuss patients who are difficult to manage medically and who often require palliative care.

Junker has served on several hospital ethics committees over his career. “I think this is a natural fit for radiologists, as long as they are willing to step out of the traditional role and move into areas outside of their comfort zone,” he explains. These roles can include everything from reviewing images directly with patients to guiding policy decisions. Heyl says radiologists can also contribute by speaking up when a scheduled procedure may not benefit the patient.

“In a general sense, it is important for specialists to be involved in ethics committees and ethics consult teams because different perspectives are essential to addressing complex clinical cases,” she explains. “Different disciplines look at cases through different lenses.” Plus, this type of consult allows radiologists to interact directly with patients to guide difficult decision making about their health care.

Junker admits that being involved in these cases isn’t always easy. “The only negative is that you somewhat share in the suffering,” he explains. “I think you need to approach this type of work with patience and an open mind and heart for those who are suffering.” In the end, he says, it’s worth it because the patients appreciate that you’ve helped them through a tough time. “You’ll get letters from grateful patients and families. They often speak about how important their meeting with you was and how you took care of them at this difficult time in their lives.”

As far as broader rewards go, Junker says being a part of an ethics committee will positively affect not only individual radiologists but also the specialty as a whole. “Many patients don’t even know what radiologists do, but I guarantee you the members of our ethics committee and the nurses and admin team at our hospital greatly admire and respect our work on this committee,” he says. “And that goes a long way toward demonstrating the value that we bring to the health care team.”