Radiology leaders in Nashville bring diversity and inclusion to the forefront with initiatives to recruit, retain, and advance top talent. 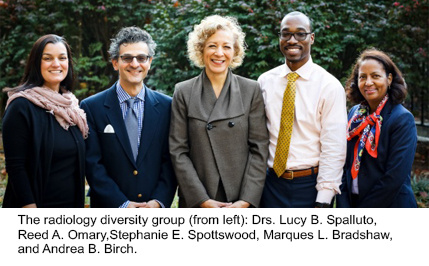 Excellence is not possible without inclusivity. At Vanderbilt University Medical Center (VUMC) in Nashville, Tenn., that compelling declaration is central to a concerted effort to make diversity and inclusion intentional and to decrease health disparities among the populations that the hospital serves.

Radiology leaders are at the forefront of this strategic initiative. Spearheading the effort is Reed A. Omary, MD, MS, FACR, the Carol D. and Henry P. Pendergrass Professor and chair of radiology at VUMC. In addition to his departmental leadership, Omary co-leads VUMC’s strategic planning efforts, under which “make diversity and inclusion intentional” has become one of four key pillars for success. The others are: amplify innovation, discover/learn/share, and design for patients and families. (See a graphical representation of these pillars.)

Omary committed to creating a culturally diverse and inclusive environment in radiology after taking the helm of the department in 2012. With this in mind, he quickly forged a close and collaborative partnership with VUMC’s senior associate dean for diversity affairs, André Churchwell, MD, and began gradually executing a plan to equip radiology faculty, residents, and staff with the necessary resources to serve a diverse patient population.

Together, Omary and Spottswood began executing the vision of enhancing diversity in the department and increasing opportunities for underrepresented minorities (defined at Vanderbilt as African-Americans or Blacks, Hispanics, American Indians, Alaskan Natives, Native Hawaiians, and Pacific Islanders) who are pursuing careers in medicine. Their efforts are already making an impact.

When Spottswood accepted the appointment to head the Office for Diversity, Equity, and Inclusion, she had no team or budget, but she says she had an unwavering “commitment to ensuring that radiology better reflects many of the communities we serve.” Her passion for helping Vanderbilt strengthen its diversity has deep roots. “I happen to be the first African-American who trained in our radiology program nearly 30 years ago,” Spottswood says. 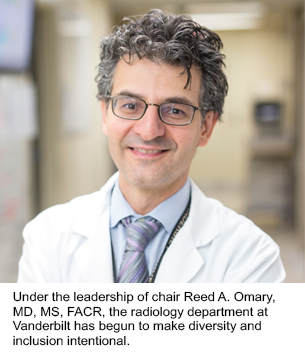 Early on, Omary and Spottswood spent hours discussing the importance of diversity and how the department needed to change. “Simply put, it’s critical for our success,” Omary says. “We need diversity to better serve our patients and our trainees, to generate better ideas, and to make better decisions. From every perspective, it is the right thing to do. And we intentionally set out to change ourselves.”

Omary and Spottswood partnered with VUMC Diversity Affairs to build radiology’s diversity program, step by step, into one of the most robust at the university. Over the last five years, the office has expanded from Spottswood — who initially spent only 10 percent of her time formally fostering diversity — to a team that includes four other radiologists. All of the members, including Spottswood, dedicate a portion of their time to the office while continuing to maintain their clinical practices and educational roles.

As the office has grown and added initiatives, the radiology department has also secured additional funding and resources — some coming from VUMC Diversity Affairs. Today, the department has three key programs to achieve its diversity goals: radiology residency recruitment, faculty enrichment, and the Women in Radiology program.

Here’s how radiology leaders are leveraging these programs to transform goals into action.

Aligning with a VUMC-wide initiative, radiology’s Office of Diversity, Equity, and Inclusion initially concentrated on bringing more minority applicants into the radiology residency program. “Radiology has been a particular focus because, if you look at the top 20 medical specialties, our specialty ranks 18th with respect to minority-based representation,” Spottswood says.

The office employs a multifaceted approach to recruit underrepresented minorities to its diagnostic radiology residency program — starting with simple updates to the program website that highlight the team’s commitment to diversity. It also conducts targeted outreach to medical school students at Vanderbilt and historically black medical schools across the country, through the ACR Nth Dimension Summer Immersion Internship Program , and at conferences, like the Student National Medical Association and the Latino-American Medical Association. What’s more, the office has created a job shadowing program and formed an increasingly diverse residency selection committee. 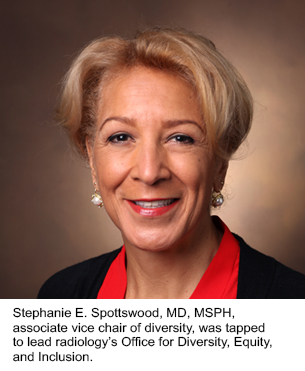 “We completely revamped our residency recruitment process and started recruiting candidates from all over the country,” Omary says. “One of our most successful initiatives has been participating in the Vanderbilt ‘Second Look Weekend.’ We went from never participating in Second Look to being the biggest participant at the medical center.” Second Look invites competitive underrepresented minority residency candidates to return to VUMC after the first interview (and prior to the match process) to further explore the center’s programs and investigate clinical specialties.

Eleby R. Washington IV, MD, a radiology resident at Vanderbilt who serves as the resident liaison to the Office of Diversity, Equity, and Inclusion, says Second Look has had a profound impact on potential applicants’ decisions. “Beyond traditional tours and meetings, we host social events to get to know candidates personally and help them get to know the radiology department,” he says. “Overall, it’s been a powerful tool to recruit some of the most exceptional radiology residents and underrepresented minorities to our program.”

These recruitment efforts have had a positive impact on diversity in the radiology department. “The composition of our residents and of our faculty has changed dramatically over the last five years,” Omary says. “We have more women, more underrepresented minorities, and more geographical diversity among our trainees. We want the best people we can get. And we’re now getting candidates from top-tier programs all over the U.S.”

Washington adds, “In the 25 years before we established our diversity office in 2013, only eight underrepresented minorities came through our radiology residency program. We’re on track to match that number in the last five years alone!”

In fact, the initiatives have nearly doubled the diversity of the diagnostic radiology applicant pool from 7.5 percent to 13.5 percent, Spotswood says. “The most recent results of our National Resident Matching Program reveal that 25.9 percent of our diagnostic radiology residents will be underrepresented minorities in the 2019/2020 academic year,” she says. “These numbers far exceed the national average of 8.3 percent2 in Accreditation Council for Graduate Medical Education diagnostic radiology training programs.”

While the office’s diversity and inclusion efforts began with minority recruitment, they quickly expanded to include a faculty enrichment program designed to educate and prepare the entire radiology department to serve an increasingly culturally diverse patient population and reduce health care disparities. “I believe outcomes can be improved when the culture is welcoming to and understanding of all patients,” Spottswood says. “Building cultural proficiency and mitigating unconscious bias are two key components of achieving that important goal. Our faculty enrichment includes training to advance both.” 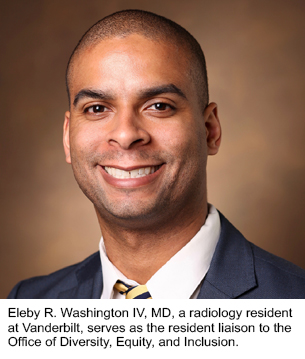 Unconscious bias training builds on these lessons to help the team recognize and mitigate bias — both in recruitment decisions and during patient care. Spottswood is one of 16 VUMC leaders who are trained in the principles of unconscious bias and are leading seminars to educate all 20,000+ VUMC employees. (Learn more about radiology’s leadership role in Vanderbilt’s unconscious bias initiatives.)

Another learning opportunity is the department’s annual Diversity Grand Rounds Lectureship. “We designed the lectureship to help our radiologists better understand the importance of diversity,” Spottswood says. “It recognizes the research and clinical achievements of nationally renowned, underrepresented minority physicians within our specialty. And we provide CME credit to our faculty for attending.”

Some examples of Diversity Grand Rounds speakers include:

As part of the Office of Diversity, Equity, and Inclusion’s vision to further create a culturally diverse, inclusive, and welcoming environment, Spottswood co-founded the Women in Radiology group with Lucy B. Spalluto, MD. Spalluto is the co-director of Vanderbilt’s Women in Radiology initiative and associate director for Diversity, Equity, and Inclusion in the department of radiology. The goal of the Women in Radiology group is to promote a departmental culture supportive of the career advancement of female clinicians. The program started with potluck dinners and, ultimately, grew into the Leadership Intervention to Further the Training of Female Faculty (LIFT-OFF) career program.

Along the way, the radiology department has boosted the number of women on its faculty from 30 percent to 39 percent over a two-year period. (Learn more about Vanderbilt’s female faculty development efforts in this JACR article .)

Through programs like the ones at Vanderbilt, intentional diversity and inclusion can lead to a culture shift where this type of thinking becomes second nature. “We’ve embedded diversity and inclusion in all of our processes,” Omary says. “Now when we form a committee or work group to tackle a problem, we ask ourselves, ‘Have we intentionally included people with a diverse breadth of experience — whether it is gender, racial, geographic, cognitive?’ We stop and have that reflective pause. After a while, it becomes instinctive.”

Radiology leaders at Vanderbilt understand that to meet their goals, address future challenges in health care, and achieve equity in patient care, the specialty must make diversity a top priority. “Bringing together people from different backgrounds with diverse ways of thinking — that’s where innovation and improved problem solving arises,” Washington says. “Embracing diversity can help radiologists deliver exceptional patient care. And a program like ours at Vanderbilt will only improve our specialty and, ultimately, our ability to help patients.”

Have a case study idea you’d like to share with the radiology community? Submit your idea now »

Diversity Matters by American College of Radiology is licensed under a Creative Commons Attribution-NonCommercial-NoDerivatives 4.0 International License. Based on a work at www.acr.org/imaging3. Permissions beyond the scope of this license may be available at www.acr.org/Legal.