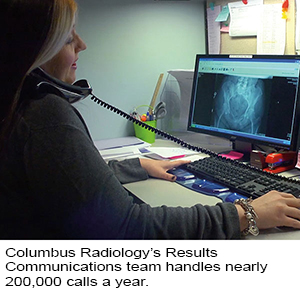 It’s late on a Friday afternoon, and a patient has arrived at her family physician’s office with apparent pneumonia. But before the physician can prescribe treatment, she orders a chest X-ray to confirm the diagnosis. The radiologist reviews the images and sees that the patient does indeed have pneumonia. He faxes the findings to the family physician’s practice, but that office closes for the weekend without anyone noticing the radiologist’s report on the fax machine. In the meantime, the patient’s condition deteriorates, and by Sunday afternoon, she arrives at the emergency department in dire need of antibiotics. She is admitted to the hospital, her prognosis uncertain.

In the above scenario, the radiologist provides little added value to the family physician or the patient. But Columbus Radiology, a private practice with more than 50 radiologists in Columbus, Ohio, has developed a program to prevent such outcomes and improve patient care. The Results Communication Center (RCC) is a 24/7/365 service that Columbus Radiology formed to deliver significant findings to referring physicians, help referring physicians order appropriate imaging, and initiate telephone calls between radiologists and referring physicians. With the RCC, the pneumonia patient’s case would have turned out much differently. Rather than simply faxing his report, the radiologist would have instructed the RCC to call the family physician directly to relay the findings. “Then, the family medicine doctor could have called in a prescription to get the patient feeling better that weekend, instead of waiting until Monday,” says Amanda McNutt, Columbus Radiology’s vice president of operations.

The RCC is part of a larger effort by Columbus Radiology in recent years to provide greater value to its referring physicians, hospital partners, and patients. The practice has also developed educational programs, a guidelines handbook, collaborative marketing materials, and other programs to foster meaningful partnerships with the 15 hospitals and nine health care systems it serves. These efforts have contributed to up to a 28 percent sustained increase in outpatient volumes at some of the practice’s affiliated health systems. “We have really tried to differentiate ourselves as a practice by developing strong relationships with our hospital sites,” McNutt says. “We make sure we understand our hospital partners’ strategic goals and their pain points, and we identify opportunities to support them in those areas by making sure that we’re available to the hospital staff, we’re accessible to referring physicians, and that we provide the highest level of service that we possibly can.”

Columbus Radiology began making value-added service a priority in 2007, after it received the results of a Press Ganey physician satisfaction survey from Grant Medical Center, one of its largest affiliated hospitals. The survey results indicated that referring physicians were having difficulty reaching Columbus Radiology’s radiologists through its main telephone line. In response, Columbus Radiology conceived the idea for the RCC (also known as the RAD1 Call Center because the number is 228-RAD1) and worked with a small group of referring physicians to pilot the project. The practice hired a medical transcriptionist to call-in the reports, answer incoming calls, and dispatch calls to the group during normal business hours. “By and large, the referring physicians responded very positively to the center because they got their imaging results sooner, which expedited care,” McNutt says. Following the successful six-week-long pilot, Columbus Radiology rolled the program out to Grant Medical Center and eventually to all of the hospitals it serves.

As it added more hospitals and health care systems to the RCC, Columbus Radiology wanted to improve the call center’s level of service. To that end, the practice replaced the transcriptionist with clinicians, including imaging technologists and licensed practical nurses, who are not only fluent in medical terminology but who also have patient care and customer service experience. In 2014, the practice expanded the RCC again when it began operating the center around the clock, with most nightshift employees working remotely from Hawaii. McNutt says that extending the call center’s hours was a big step, but the move ensures consistent service and allows referring physicians to reach the practice’s on-call interventional radiologists at all hours. “We started the RCC with one person, but as we added new hospital contracts, and those referring physicians began using the center as well, we hired additional staff,” McNutt explains. “Now we have 13 people, including contingent staff, who operate the center 24/7/365 and process approximately 200,000 calls a year.” 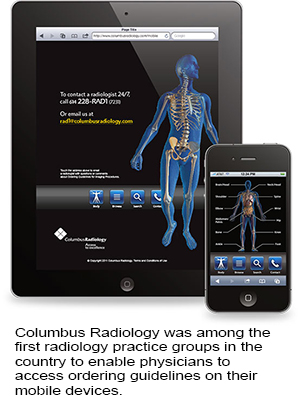 The RCC brings equally significant value to Columbus Radiology’s referring physicians and hospital systems. Jason Theadore, former interim president and chief operating officer for OhioHealth Neighborhood Care, especially appreciates that referring physicians can use the center to reach the radiologists for consultation any time of the day or night. “The call center really allows referring physicians and radiologists to connect in ways that are very meaningful, which provides value by speeding up patient care, improving the quality of care, and enhancing patient safety,” says Theadore, who is now vice president of ambulatory services and business development at Mercy Health in Toledo. “It also helps from the patient perception standpoint because it shows that the radiology practice and hospitals are working together.”

Columbus Radiology has tracked the types of calls that the RCC has received through the years and has found that referring physicians frequently call about imaging appropriateness. In response, the practice created an ordering guidelines handbook, which it released in 2011 on its website and as a digital application. The handbook is a reference to help referring physicians navigate imaging appropriateness. “Once you pick the body system, you can see the various exam types that you can order, what they’re good for detecting and what they’re not good for detecting, what symptoms each exam correlates with, and so on,” explains Charles McRae, Columbus Radiology’s chief executive officer. Karen Jenkins, MA, CCC-SLP, director of rehab and radiology at Adena Health System, says the handbook is a convenient reference for referring physicians who are sometimes unsure which type of imaging exam to order and whether or not an exam should include contrast. “It’s especially helpful because we have a lot of residents who are still learning about imaging appropriateness,” she says.

Another initiative that Columbus Radiology created in response to referring physicians’ questions about appropriateness is a free, two-hour continuing medical education (CME) event that focuses on ordering guidelines. “When we asked the leadership at one of our health systems whether they thought referring physicians would respond well to an ordering guidelines event, they said that they thought that people would come out in droves,” McNutt says. With that reassurance, Columbus Radiology formed a committee, which included a family medicine physician and an internal medicine doctor, to develop the event around radiologist-authored content about musculoskeletal, neurological, and body imaging as well as imaging treatment for tumor management and contrast and radiation safety. The first event’s 50 slots filled up in 10 days, while a later event attracted 103 referring physicians, hospital administrators, and other participants, making it OhioHealth’s most well-attended offsite CME event to date, McNutt says. Such educational programs have strengthened the radiology practice’s partnerships with its affiliated hospitals and health care systems. “The fact that Columbus Radiology’s staff and radiologists are more than willing to invite our providers to participate in offsite workshops creates a very supportive environment,” Jenkins says.

In addition to educating referring physicians, Columbus Radiology has created its own subspecialty-based, double-blind peer review program to help its radiologists deliver higher quality reads and improve patient care. In 2013, the practice worked with a vendor to develop software that randomly pulls cases and puts them in a separate work list for the peer reviewer to evaluate outside of the normal workflow. Unlike other systems, the software redacts the original radiologist’s name and makes it impossible to skip cases, ensuring unbiased reviews. The cases are also reviewable within days or weeks of the original read, as opposed to months with other systems. “The reviewer can go in and evaluate those cases in a much shorter timeframe using current data,” McRae says. “So there’s no retrospective bias, and there’s still time to impact patient care, if something was missed during the original read.”

But the peer review system can do more than evaluate the original radiologist. It can also review the reviewer. As they’re transferred to the peer review work list, the cases can be edited to include intentional misses. “So a reviewer can’t just go through and not pay close attention,” McRae says. To ensure reviewers don’t inadvertently report intentional misses to the original radiologists or referring physicians, all names, contact information, and other identifying data is redacted from the edited cases. What’s more, reviewers must report all misses through the RCC, which knows whether the misses are intentional or not, and no critical results are intentionally edited into the cases. McRae says the robust system shows that the practice takes quality seriously. “It gives our program more legitimacy, which increases our value,” he says. 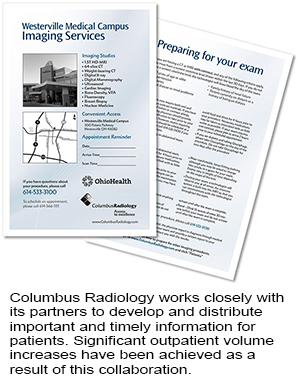 Additionally, Columbus Radiology co-produces and co-funds marketing materials in collaboration with its affiliated health systems, including maps with directions to the imaging centers and single-sheet descriptions of the services that those centers provide. “Our goal is to grow the business for both organizations,” McRae says. “If we’re successful, the hospital’s successful, and vice versa.” McRae says that while the radiology practice and its partners must collaborate closely to ensure such materials are accurate and align with both organizations’ strategic goals, the effort is worth it. The marketing campaigns and other efforts have helped drive a 28 percent sustained increase in outpatient volume at one health system, and sustained increases of 10 percent and 13 percent at two other health systems, respectively. Theadore says that such tangible results highlight the value that Columbus Radiology brings to the health care enterprise. “I know a lot of people claim to be committed to quality these days, but Columbus Radiology has proven it with actions that drive results,” he says. “They understand that we are now in a service industry and that to be successful we must work together to provide unmatched service. They’re a wonderful partner.”