In the Same Vein

A team of specialists establishes a multidisciplinary vascular malformation conference, filling a need in pediatric care.
Get a PDF version of this Case Study
Download 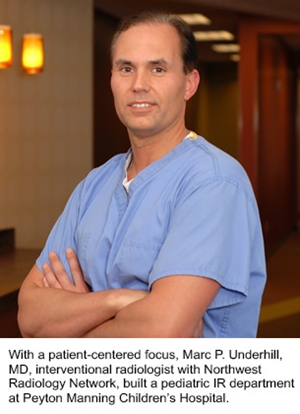 Since then, the number of pediatric patients turning to PMCH for sclerotherapy treatment has increased exponentially thanks to the focus that Underhill and his colleagues have put on patient-centered care. (Read about the steps Underhill took to establish PMCH’s pediatric IR department in this Imaging 3.0 case study.)

Around the time Underhill began building the department in early 2016, a pediatric hematologist who shared his interest in these malformations joined the hospital staff.

Underhill worked with the hematologist to establish a multidisciplinary conference that occurs once every two months.

Other radiologists, hematologists, oncologists, ophthalmologists, surgeons, dieticians, and support staff attend these meetings to discuss difficult cases and collaborate to outline the best treatment plans. “It’s almost like a tumor board but for vascular malformations,” Underhill explains.

Underhill says that the goal is to eventually expand this conference into a vascular malformations clinic, where patients meet with all of these specialists at once for more collaborative care. Until then, Underhill is holding dedicated office hours to follow up with sclerotherapy patients and manage their treatment.

Based on this success, Underhill and his colleagues are also beginning to tackle more difficult lesions, like thyroglossal duct cyst remnants, brachial cleft cysts in non-operable locations, facial hemangioma, and high-flow arteriovenous malformations.

While sclerotherapy was not a priority for Underhill when he established the pediatric IR department, he says it has become the center of his practice.

“Sclerotherapy is a staple of most pediatric IR practices, but when we started the pediatric IR department, the vast majority of these cases were being sent out to other providers,” Underhill says. “I had no idea how much demand there was for these services at PMCH. As our numbers rocketed up, our team has learned and shared valuable teaching points from these difficult cases. We’ll use those lessons to continue evolving these services in the coming year.”