A Kansas-based radiology group is on track to accrue significant shared savings through a physician-owned accountable care organization.
Get a PDF version of this Case Study
Download
To learn more about Wichita Radiological Group’s shared savings implementation process, click here. 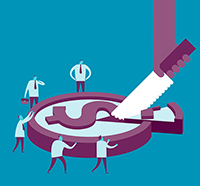 What would it be like to belong to an accountable care organization (ACO) where radiologists truly receive a significant cut of the savings? Although ACOs are designed to save money, in many instances, those funds are first channeled to the hospital and other physicians — with little left over for radiologists. An exception to the rule is Wichita Radiological Group (WRG), in Wichita, Kansas, which has found a way to create a physician-owned and operated ACO and bring funds back to the radiologists. The group has been a leading factor in the ACO’s creation and continues to be an integral part of its success. More importantly, as the ACO grows and moves forward, radiologists at WRG expect to see ongoing savings and remain a central part of the decision-making process.

A Different Species of ACO

For John H. Lohnes Jr., MD, FACR, president of WRG, the decision to join a physician-led ACO was a logical step forward. “When the major hospital group in our area decided to buy a large multi-specialty physician practice and absorb 300 or so doctors into a Mayo Clinic-type environment, their attitude changed toward those they perceived as ‘non-aligning physicians.’” Physicians who had been loyal to the original hospital system found they were now being overlooked for referrals and ignored in the decision-making processes.

Lohnes goes on to assert that the situation “made it crucial for many left on the sidelines to build their own physician-led organization. That was the impetus for our ACO. When medicine is at its best, it is the patient working with the physician that is the central enterprise.”

Fortunately, the group had developed very good relationships with numerous primary care physicians and specialists within the community over the last decade. “It was at their insistence that the radiologists at WRG were invited to become involved in the organization’s genesis,” Lohnes states. Because the primary care physicians were often in competition with each other for the same patient pool, the specialists changed focus and initially constructed a specialty Independent Physician Association (IPA). After that initiative was well underway, the IPA invited the primary care groups to join. The ACO was finally certified in the fall of 2013. 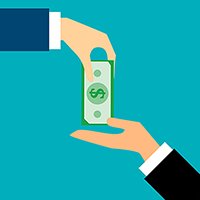 Although WRG expects to see modest funds being channeled directly to the practice in 2014, that number is expected to grow in the years to come. “With about 16,000 covered lives, we think we can achieve 10 percent total savings in the second year,” says Lohnes. “That 10 percent would generate a shared savings back to the physicians in this organization of about $7 to $8 million dollars.”

Here’s how the savings break down:

CMS requires that some of the savings go back into the program itself, so the first 10 percent is reinvested into the ACO to enhance benefits and technology, including upgrading the population database management system. The remaining 90 percent is then divided among the physicians. First there is the partial repayment of half of the dues that specialists pay into the system each year. “That will probably generate $2,500 to $2,600 per physician per year, which includes radiology as well as other specialty groups,” Lohnes states. There are 21 radiologists within WRG, and each one would receive that starting amount. After that, the remaining savings will be split among physicians on a per-patient attributed basis.

“I anticipate that in 2015, we will be refunded close to $4,000 to $5,000 per physician. Over the course of the three-year initial CMS shared savings program, it will be closer to $10,000 per physician,” Lohnes points out. “Right now these are estimates of how we’re doing, because we are slowly getting data back from CMS. But it gives us time to work on our coordination of care and make sure all of the IT pieces are in place to support our ‘clinic without walls’ organization.”

Ultimately, Lohnes wants the ACO to become its own “insurance product” or entity. “The intermediate step is to work with local organizations, school districts, and the manufacturing companies that are all self-insured and become a network for them,” he states. “Cutting out that middle person could reduce the general regulatory and paperwork burden, which is estimated to be about a third of total medical spending. If we can get that down to 10 percent, it frees up money for actual medical care. Reclaiming that and putting the patient back at the center of our focus will be the single greatest outcome that we can provide.”

Lohnes and his staff became involved in multiple working groups and committees to make sure their radiology practice was contributing its ideas and ensuring that others marked their presence and their willingness to participate in the new ACO. “We populated every possible aspect of the executive committee, subcommittees, and working groups,” he says. “We made sure we were plugged in at every level. And if we were not on a committee, I sat in on the meetings anyway, using my prerogative as a member of the executive committee.”

This involvement has paved the path for communication with payers, hospital administration, and various executive staff. “Everyone likes it when you come to the table with ideas that make their lives easier,” Lohnes observes. “The way forward for most radiology groups means following the classic Imaging 3.0TM advice: Show your value over and above just being an interpreter of images. Just by showing up, you can volunteer to do things that will be ultimately beneficial to your group. At the end of the day, radiology is a service organization. You gain traction when transforming problems into solutions and by asking the question, ‘How can I help?’”

For those radiologists who want to be part of an ACO where radiology receives a significant slice of the savings: