The Portrait of the Four Tetrarchs 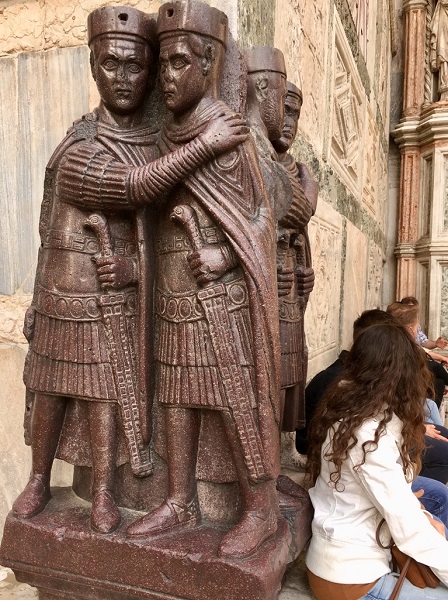 The Four Tetrarchs statue in the photograph dates to around the year 300. It was probably brought from Constantinople to Venice during the Fourth Crusade around 1204 and was incorporated into the exterior of St. Mark’s Basilica.

In the third century, the Roman Empire went through a half century of anarchy. The army made and unmade over 20 emperors. Only one died of natural causes. In 384 after another imperial assassination, General Diocletian was hailed as emperor. Determined to survive, he totally reorganized the empire. He ruled the eastern half and appointed another general and close friend to rule the western half. A few years later they divided the empire again and appointed two deputy emperors to rule the more unstable provinces.

The plan fell apart the year after the transfer of power when the new western emperor died, and his troops hailed his son as emperor. After more civil strife, the son Constantine defeated his rivals, reunited the empire and moved the capital to Byzantium (aka, Constantinople).

The photograph of the statue shows four nervous-looking ﬁgures with hands on their swords for good reason. The tourist sitting next to the statue, however, is ignoring it!