For over two decades, my family had been trying to track down the source of our surname. “Willing” is not a common last name. How hard could it be? We assumed it must be English, although we eventually learned there were many “Willings” in Germany. Our family records were limited. My great-grandfather, whom we knew as “Alfred Willing,” was born in 1868 and died in 1915; however, we could ﬁnd no record of him prior to the 1900 census. Where did he come from? Why isn’t his name in any earlier census? Was he a stowaway?

Finally, I put my research skills to work over the 2018–2019 New Year’s holiday after my father purchased a full subscription to ancestry.com. Yet, I could still find no record of an Alfred Willing until I did an unrestricted search for “A. Willing born in 1858,” which oﬀered a birth record in cursive Hebrew from the Rodeph Shalom synagogue in Philadelphia (see Figure 1). According to Wikipedia, this is “the oldest Ashkenazic synagogue in the Western hemisphere.” This particular “A. Willing” was born “Abraham Willing,” the son of a Dutch Jewish couple, Andries Willing and Elizabeth Hymes, who emigrated to America in 1853. Abraham had three siblings: Markus, Catherine and Rachel. Could my great-grandfather, Alfred, really have been Abraham? 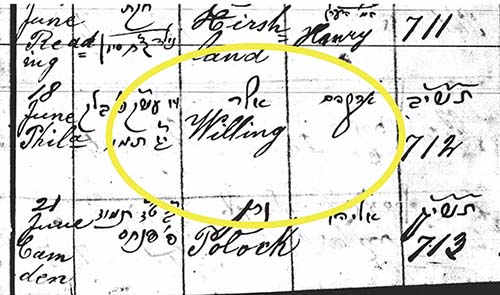 Whereas Alfred Willing never appeared in any earlier census, Abraham Willing appeared in 1860, 1870 and 1880. Resorting to another research site, we visited newspapers.com and searched for more information on Alfred. This turned up a death notice from the Bridgeport (Connecticut) Times noting the death of Alfred Willing, who was survived by one sister, a Catherine Bendon. Abraham also had a sister named Catherine. According to the 1900 Census, Catherine Bendon was born in Pennsylvania in 1855. Other lines of evidence conﬁrmed a match. A marriage record of Harry Bendon and Edith Houseman from 1917 listed the mother’s maiden name as Catherine Willing. Everything converged toward the inescapable conclusion. Finally, my dad’s DNA came back at 25% Ashkenazi Jewish.

Once we had identiﬁed my great-great-grandfather as Andries Willing (1824–1859), we were able to locate his place in previously developed family trees for the Willing family in the Netherlands. A certain “Andries Willing” had entered England from Holland in 1849 with his wife. Markus, the older brother of Abraham, was born in England. Moses Gabriel Willing (1786–1826) had nine sons and daughters. Many of them had known descendants, but one son — Andries, born 1824 — had been lost to follow-up.

Again, we found a match. This plugged us into another researcher’s family tree, and the line of Moses Gabriel Willing was traced all the way to David Winning (1620–?). A website devoted to this branch of the Willing family indicated the “Winnigs” may have originated from the Jewish Quarter in the German town of Windecken, near Frankfurt. A Dutch researcher explained to me that the change from “Winnig” to “Willing” occurred in 1811 as a consequence of Napoleonic reforms that were brieﬂy in eﬀect.

Whatever is the opposite of antisemitic — philosemitic? — would have described me growing up. I was touched by the horriﬁc details of the Holocaust in my early teens and had many Jewish friends in high school as well as in later years. I adored their humor, culture and traditions. My deceased ﬁrst wife was Jewish, and I still enjoy good relationships with her family. Never, throughout the ﬁrst six decades of my life, would it have entered my mind that I was actually part Jewish. In fact, we had always been told there was some Native American ancestry, which proved most incorrect. We were members of a tribe, all right: The Tribe of Judah.