One Big, Happy Immigrant Family: Our Journey From East to West

I was raised in a big family of five — two older sisters, two younger brothers and me in the middle. I grew up in India and finished medical school from Sri Venkateswara Medical College, Tirupati in 1980.

My father was a community college economics lecturer and paid for my college tuition. I met my husband, Srinivasan Vijayakumar, in the same medical school. He graduated in 1978, two years ahead of me. We got married in 1982 and then moved to the United States.

Both my younger brothers also moved to the United States around the same time as my oldest sister, who arrived a few years before and gracefully sponsored all of us. Most of my family lives in Virginia, Maryland and Washington, DC.

After almost four decades, our family has grown even larger with several nephews, nieces and grandchildren. In Figure 1, you’ll see a photo of my big family taken at my niece’s wedding in Virginia in 2013. We are a very happy family and gather frequently for weddings, birthdays and other holidays. 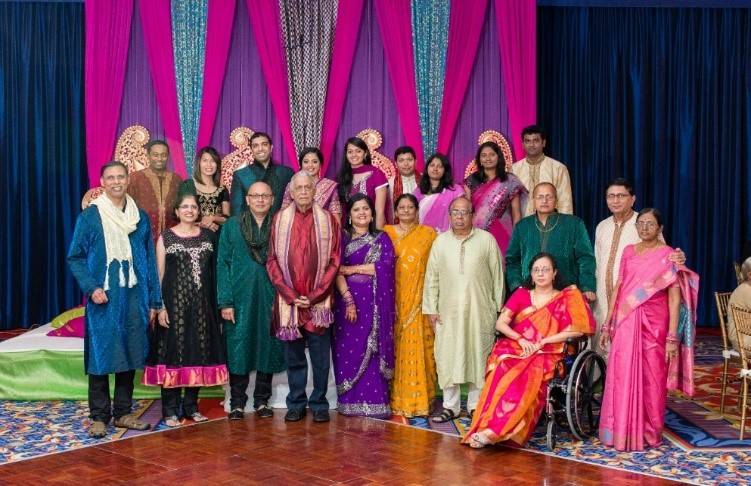 All of my family members in the U.S. are very talented professionals in various fields including IT, finance, government service and law.

During my professional journey, I completed my internal medicine residency at the Cleveland Clinic from 1986 to 1989. After that, we moved to Chicago, and I finished a residency in nuclear medicine from 1989 to 1992 at the University of Illinois, Chicago. From 1992 to 2002, I served as Chief of Nuclear Medicine at Mt. Sinai Hospital in Chicago. During that time, my husband worked on the faculty for radiation oncology at the Cleveland Clinic and the University of Chicago.

From 2002 to 2006, I lived in Galveston, TX, and worked as Chief and Associate Professor of Nuclear Medicine at the University of Texas Medical Branch at Galveston. Due to Hurricane Rita, however, I had to leave. I then moved to Sacramento, CA, where my husband was Chairman of Radiation Oncology at University of California, Davis, from 2002 to 2007.

I worked at a private practice in Sacramento for one year, and then we both transferred to the University of Mississippi Medical Center (UMMC) in 2007, and we’ve been there ever since. I am now Chief of Nuclear Medicine and my husband is Chairman of Radiation Oncology at UMMC.

Both my and my husband’s parents passed away a few years ago; we used to visit them frequently. I still visit our remaining family, including one of my sisters and her daughter’s family in India once a year. Due to the COVID-19 pandemic, we have not traveled to see our family for a year and a half. We plan to start traveling again when COVID-19 is under control and we are all vaccinated.


My husband and I visited India in 2018 and had a photo taken at the beautiful Taj Falaknuma Palace Hotel in Hyderabad (Figure 2). All my nieces and nephews are grown up now, and three of them are in the U.S. and one in India. We currently have five beautiful grandchildren (Figure 3).

I am happy to share the journey of my large, happy, wonderful immigrant family from east to west. I am also grateful to be part of the academic radiology family for almost 20 years, teaching residents and mentoring.