History of Breast Imaging: A Pictorial 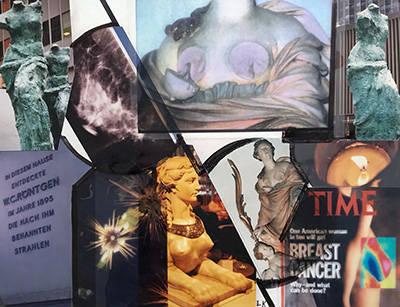 This poster represents a collage of photographs taken by Ismail Kazem, MD, FACR, FASTRO, to compose and create a theme celebrating the centennial of the discovery of X-rays.

The theme of the composition is the impact of mammography on breast preservation in the treatment of cancer of the breast. Two historical events are juxtaposed: the martyrdom of St. Agatha (patron saint of breast diseases) and the discovery of X-rays.

The legend of St. Agatha, who lived in Sicily around the third century, tells of her torture as punishment for her purity and unshaken beliefs, first by beating and then by cutting off her breasts. The discovery of X-rays one hundred years ago paved the way for mammography and modern radiation therapy. As if in answer to St. Agatha’s prayers, more women with early breast cancer are successfully treated with breast preservation consisting of removal of the cancerous mass followed by breast irradiation.

The statue of St. Agatha in a village church in the Netherlands was photographed and forms the nucleus of the composition, with a detail of the cut-off breasts dominating the upper field. The lower left corner depicts the edifice of Roentgen’s discovery on the physics building in Wurzburg, Germany.

The lower right corner shows Time’s cover story on breast cancer. The statue of a female sphinx, symbolizing assertiveness, was photographed in the Mirage cocktail lounge of the New York Hilton Hotel and Towers.

The statues of three female figures in the right and left upper corners of the collage are displayed in front of the Credit Lyonnais Building in New York City. Two of the figures exhibit a mastectomy scar replacing the right breast. Finally, a mammogram atom merges the abstract with the concrete.

The collage was first published on the cover of the November 1995 issue of New Jersey Medicine, and is reprinted with permission.

Dr. Kazem and his wife are retired in Tampa, FL. He is emeritus professor at USF College of Medicine.