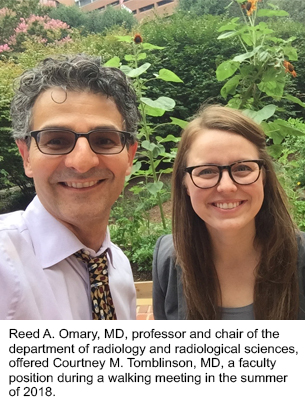 A lot has been said in recent years about the negative impact that sitting all day can have on the physical and mental health of workers who spend most of their time in front of a computer. Workers are encouraged to abandon their desks often to stretch their legs, rest their eyes, and clear their minds — and radiologists are no exception.

At Vanderbilt University, Reed A. Omary, MD, FACR, professor and chair of the department of radiology and radiological sciences and professor of biomedical sciences at the university’s medical center and school of medicine, is championing a complementary practice called walking meetings. The concept is simple: Instead of holding meetings in his office or a conference room, Omary often invites attendees to talk while they walk around the university’s Nashville, Tenn., campus.

Omary has held walking meetings with everyone from renowned neurosurgeons to fellows, discussing everything from healthcare policy to departmental job openings. He has found that, in addition to being good exercise, walking facilitates free conversations and serendipitous encounters that aren’t likely to occur in a meeting room.

“Walking relaxes people and helps them open up,” says Omary, who is also the director of Vanderbilt’s Medical Innovators Development Program. “It allows us to have more meaningful conversations than if we were sitting across a conference table, which ultimately leads to better outcomes from the meetings.”

Omary held his first walking meeting on the spur of the moment about five years ago. It was a nice day, and when the person he was meeting with arrived, he suggested that they take a walk outside. The approach fostered such a positive cognitive and physical experience that Omary started planning regular walking meetings whenever the weather was favorable, even asking guests to bring appropriate footwear for the occasion. “The more I did it, the more I realized the benefits over conventional meetings,” says Omary, who often shares selfies from his walking meetings on Twitter (@ReedOmary). “Like sitting down with someone over coffee or taking someone out to dinner, walking tends to make people be more present with one another — and it has the added benefit of being good for your health.”

As Omary made walking meetings part of his regular schedule, he came across the Latin phrase solvitur ambulando in a poem by Billy Collins. The phrase, which means “it is solved by walking,” resonated with Omary, who realized that what he was doing wasn’t unique or fanciful — its benefits are scientifically noted. In fact, studies show that walking increases creativity and ideation, which are critical to improving problem-solving and decision-making skills.1 “The concept goes back to many ancient cultures, including the Greeks,” Omary explains. “It’s the notion of philosophers walking with their students, and some religious traditions incorporate it, too. It’s a way of clearing the mind, getting some exercise, and engaging more fully with one another.” 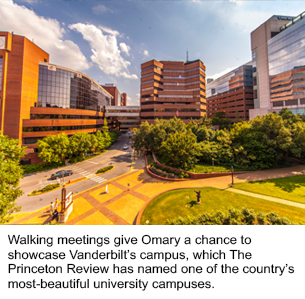 In this vein, many of Omary’s walking meetings involve discussions about philosophical topics like how choosing challenges that pose a real risk of failure can lead to more fulfilling careers. He finds that during the meetings, the conversations often meander and delve into a range of topics, just as the path walked often veers from one route to another. “Your mind kind of wanders as you walk, and ideas pop into your head as you see things,” he explains. “You think of solutions and concepts that might not occur to you otherwise, and you can talk through those ideas with people while you’re walking.”

Omary especially likes to incorporate walking into meetings with visiting professors and other guests, when the weather is good. He also prefers walking meetings when talking with medical students about radiology and when recruiting fellows and faculty candidates to his department. “It offers a great opportunity to showcase our campus when we have visitors or are recruiting new hires,” Omary says. “Over the past several years, The Princeton Review has ranked Vanderbilt anywhere from the No. 1 to the No. 3 most-beautiful campus in America, so we want to show it off. Instead of talking about what it’s like to be at Vanderbilt, walking allows people to experience it.”

A walking meeting was the approach Omary took when he interviewed Courtney M. Tomblinson, MD, for a fellowship position and again when he offered her a faculty position in the summer of 2018. Tomblinson says she was a bit surprised when she found out that Omary wanted to take her on a walk for her fellowship interview, but the experience reinforced her interest in Vanderbilt. “It’s a stimulating exercise that allows you to take a breath of fresh air, both figuratively and literally, putting you at ease,” Tomblinson says. “It gives you a chance to actually envision yourself in the place where you’ll be working, not just in the reading room, but the location where you will be spending your time and your life. I thought that was really powerful.”

Richard Duszak Jr., MD, FACR, FRBMA, professor and vice chair of health policy and practice in the department of radiology and imaging sciences at Emory University School of Medicine, also remembers having a walking meeting with Omary. Duszak was speaking at Vanderbilt a few years back, when Omary simply asked if he wanted to walk and see the campus while they talked. As someone who initiates a lot of his own walks (although he doesn’t call them walking meetings) and who often walks around while on phone calls, Duszak welcomed the idea of walking and talking with Omary. “I was still the chief medical officer of the Neiman Health Policy Institute then,” Duszak recalls. “We talked about what I was doing there and about our career paths. In the process, I got to see some of the campus; it was fun.”

In addition to allowing people to experience Vanderbilt, one of Omary’s favorite things about walking meetings are the chance encounters that often occur. It’s not unusual for Omary to bump into someone he knows during a walking meeting, which gives him an opportunity to introduce his meeting partners to someone new. 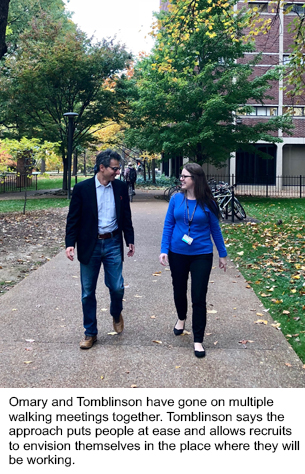 For instance, Tomblinson recalls that during her fellowship interview she and Omary ran into Lucy B. Spalluto, MD, director of Vanderbilt’s Women in Radiology program. “When I returned to my residency program in Arizona, I got involved in the American Association for Women Radiologists, where Dr. Spalluto was on the board,” Tomblinson explains. “The only reason I knew her was because Dr. Omary had introduced us during our walking meeting. That gave me a reason to reach out to her, and she has been an inspiration to me ever since.”

Another benefit is that walking meetings help reveal people’s character. For example, Omary was impressed when the leaders of two different hospitals stopped to pick up litter from the ground. “It’s really interesting to watch how somebody reacts when they see something that they didn’t cause, but they take the time to fix it,” Omary says. “Whether it’s picking up trash or smiling at someone who’s walking past, you see the way they interact with other people and their surroundings; you witness their body language. These details are especially important during inter-views. We aim to recruit people who treat others with respect. It can be difficult to assess this trait in a one-on-one meeting in a conference room.”

While walking meetings have many advantages, they also have limitations. For instance, Omary doesn’t hold walking meetings when the meeting involves a large group or inherently requires a formal approach. He also refrains from walking meetings when participants need to view a presentation or take notes, when the weather is bad, if the participant doesn’t have comfortable footwear, or if the participant doesn’t want to walk around campus or has a physical disability. “People are diverse, and we have an obligation to be inclusive,” Omary explains. “It’s important to recognize that not everyone is physically able to walk and that some people just might not be up for it — and that’s OK.”

For radiologists who spend much of their time sitting at a workstation, though, walking meetings can provide a much-needed respite. Tomblinson says that at the end of each walking meeting she’s had with Omary, she’s felt reinvigorated. “They say that you’re supposed to take breaks, and even just a 10-minute walk can really help you hit the reset button and re-energize you,” Tomblinson says. “I left both of my walking meetings with Dr. Omary with new ideas about things that interest me and things that I am working on that I wouldn’t have thought about otherwise. It’s so uplifting to be outside; it’s a great way to recharge.”

Radiologists who feel as though they don’t have time to fit walking meetings into their jammed schedules are encouraged to draw inspiration from the meeting format and take short breaks whenever possible. While it may seem counterintuitive, studies show that people who take breaks have greater focus and job satisfaction.2 For Duszak, making time for walks — especially on his busiest days — is imperative. “Personally, if I sit for too long, my back starts to hurt, so I’m really deliberate about getting up and moving,” he says. “Even a 3-minute loop around the department can make a difference. It may take me away from my immediate work for a few minutes, but it makes me more productive in the long run.”

Whether radiologists plan walking meetings into their schedules or take serendipitous walking breaks, both approaches can offer an opportunity to get out of the reading room and be more visible and available to colleagues, referring physicians, and other care partners. “One of the great things about being in radiology is how we connect with others,” Omary says. “We’re really the hub of any healthcare system; everything runs through radiology. Walking meetings are a physical way of experiencing the critical position that we hold in patient care. They can help remind us how our work is interrelated to a greater cause.”

1. Opezzo M, Shwartz DL. Give your ideas some legs: The positive effect of walking on creative thinking. Journal of Experimental Psychology: Learning, Memory, and Cognition. 2014;40(4)1142-1152.

Walk and Talk by American College of Radiology is licensed under a Creative Commons Attribution-NonCommercial-NoDerivatives 4.0 International License. Based on a work at www.acr.org/imaging3. Permissions beyond the scope of this license may be available at www.acr.org/Legal.