A survey of referring physicians produces findings that may help radiologists become “image information managers” and increase their value in the evolving world of health care.
Get a PDF version of this Case Study
Download 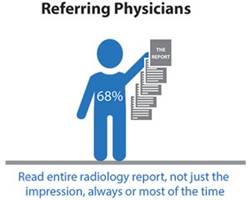 A team of radiologists at Emory University School of Medicine set out to answer those questions and more when it conducted a survey of the institution’s referring physicians. The survey included questions about the types of imaging referring physicians are most likely to order, how they use radiology reports, and how reports should be organized. Respondents were also asked to provide demographic information — including gender, specialty, and years in practice — and were invited to offer comments after each question. “We wanted to have a better understanding of how referring physicians view our reports,” says Kimberly E. Applegate, MD, MS, FACR, professor of radiology and pediatrics and director of practice quality improvement in the school’s Department of Radiology and Imaging Sciences and the senior investigator on the survey. “It’s partly a referring physician satisfaction survey, but it’s also about really understanding what referring physicians need and whether they are getting what they want.” Applegate conducted the study with Gelareh Dadigh, MD, a diagnostic radiology resident. The researchers collected 150 completed surveys, half of which came from emergency medicine physicians and hospitalists.

The survey results found that most referring physicians want greater interaction with radiologists. Out of the 150 surveys, 147 respondents provided their gender, and 85 of those were men and 62 were women. Interestingly, male referring physicians are more likely than females to rely on their own interpretations of imaging. Applegate and Sadigh say the results provide valuable insight into how referring physicians regard radiology services and can be used to advance radiologists’ roles as “image information managers” — consultants central to patient care. The concept is in line with a primary tenet of ACR’s Imaging 3.0 initiative, which calls on radiologists to become leaders across the patient care continuum. “Imaging 3.0 is an incredibly important initiative for the whole radiology community,” Applegate says. “We really need to be thinking about what value we are providing for our patients and for the people who are primarily responsible for managing their care.”

In addition to emergency and hospital medicine, physicians who participated in the survey specialize in fields such as internal medicine, anesthesiology, neurology, family medicine, OB/GYN, pathology, primary care, orthopedics, and internal medicine. Of the 149 respondents who provided the number of years for which they have been practicing medicine, 114 have been in the field 20 years or fewer, and 11 have been practicing 30 years or more. Overall, respondents indicated that the types of imaging they order most frequently are X-rays and CT scans, while the least common are MRIs. Of the 148 who responded to the question, 68 percent said they read the entire radiology report, not just the impression, always or most of the time. 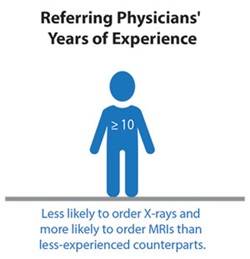 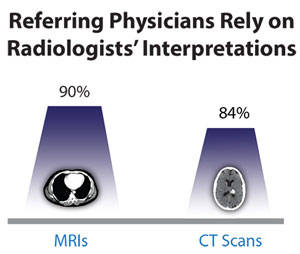 Other key findings of the survey include that approximately half of respondents think that limited contact between referring physicians and radiologists to discuss imaging tests and their results creates a barrier to providing the best care possible. By far the most frequently written comment on the survey was the desire for more contact between radiologists and referring physicians, Applegate says. Half of respondents also said that they prefer that radiologists include next steps in the management of patients in the impressions of their reports. Sadigh says that knowing that referring physicians value radiologists’ opinions and are open to strengthening the lines of communication will lead to improved patient care. “Good communication with referring physicians, through standard imaging reports and direct communication of results, decreases the number of unnecessary images ordered for patients, results in faster and safer patient care, and improves satisfaction of the patients,” she says.

Although many respondents would like more interaction with radiologists, only 19 percent think radiologists should talk to patients following the completion of imaging tests, and 6 percent prefer that radiologists never talk to patients about imaging results. Applegate says this is likely because those physicians believe that radiologists don’t know patients’ entire health histories. Sadigh was surprised that many referring physicians don’t see the value in radiologists consulting with patients. “There have been many papers published lately in radiology journals about the role of radiologists and the fact that we are not just ‘imaging interpreters,’” Sadigh says. “We can have a better role in serving our patients by taking actions and talking to them.” 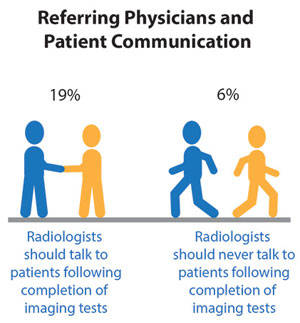 Researchers continue to analyze the survey results to pinpoint ways that radiologists can further enhance their roles as consultants for referring physicians and patients. So far, Applegate plans to use the data to support new protocols such as making radiologists’ telephone numbers and other contact information more readily available to referring physicians. She will also share the findings with fellow radiologists — trainees in particular — to reinforce the fact that the accuracy of their reports is critical. “We want to emphasize to them that what you say in the report matters, and when you make mistakes in your report, as one may do by accident, it can have really important implications,” Applegate says. “With these survey results, we can show them that our clinicians rely on what we say, so they really need to check the clarity, grammar, and accuracy of their reports.”

Although the survey did not extend to referring physicians outside of Emory, researchers say radiologists at other institutions may find value in the results as they work to increase the visibility and value of their own departments. “The survey results and the comments the physicians wrote are important data that help us understand referring physicians’ perceptions of and satisfaction with the services they receive,” Sadigh says. “Although this survey is from a single, large academic center, the results are applicable at other institutions and can help the policymakers at those institutions improve satisfaction among physicians and patients.”

For a more local understanding of how referring physicians view radiology services, Applegate encourages other radiologists to develop their own surveys. She says surveys such as this could be conducted every couple of years, if not annually, to ensure radiologists are doing all they can to meet the needs of referring physicians and be true partners in providing high-quality patient care. “We always have to pay attention to the customer, in this case the referring physician,” Applegate says. “By conducting this survey, we’re at least taking one of several steps in understanding what services we’re offering and whether we’re providing good service.”