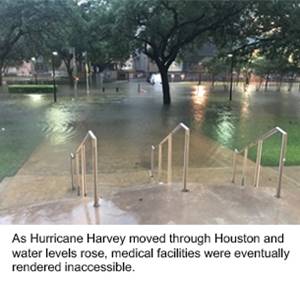 Hurricane Harvey swept toward Houston in the summer of 2017 as a Category 4, the first storm of that magnitude to hit coastal Texas since 1961. As Harvey closed in, local radiologists readied for their shifts — uncertain of what the storm might bring.

On the night of Aug. 25, assistant professors of radiology Ann Marie Marciel, MD, PhD, and Sangeetha Kumar, MD, arrived at Baylor College of Medicine, where they regularly read images and support five local hospitals. One of those hospitals is the adjacent Ben Taub Hospital, where residents Varshana Gurusamy, MD, and Joshua Carlton, DO, also prepared for the storm.

Over the next few days, the team worked together to read images and work with other departments to overcome unforeseen challenges, ensuring that patients were cared for throughout the storm. Their efforts not only made radiology more visible, but also helped patient care continue steadily during a time when it was gravely needed in Houston.

“While no one wants to endure a disaster like Harvey, the radiologists turned it into a positive opportunity for our specialty and for other fields to remember that we are part of a team treating patients,” Marciel says.

A doctoral candidate at Baylor when Tropical Storm Allison flooded the campus in 2001, Marciel knew that Harvey might force her to stay an extended period of time at the hospital. To prepare, Marciel packed food and clothing for four days. Kumar, Gurusamy, and Carlton all took similar actions before heading to work. 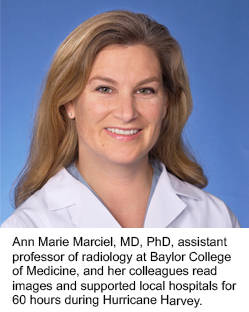 Intent on getting there, Gurusamy arrived at Ben Taub Hospital two hours early for her Friday night shift and recalls checking the weather whenever possible. “I remember going out at midnight on Saturday and watching the water creep toward the doors,” she says. “Nearby picnic benches were completely submerged; we were really only accessible by boat. That’s when it became clear that we were going to be stuck in the hospital at least overnight.”

While it quickly became impossible to leave the hospital, local patients still managed to arrive. Gurusamy and Carlton took turns sleeping to provide uninterrupted care, and the two met daily with other physician leaders to strategize and share information about the storm, hospital, and patients.

“It was tiring and at times scary,” Gurusamy says, “but I did not have a single negative interaction with anyone. I really wanted to become a doctor to help people, and this was a situation where I could see how much that help was needed.”

Shane P. Jenks, MD, assistant professor of emergency medicine at Baylor and emergency medicine assistant program director at Ben Taub, managed the emergency department during the storm and was impressed with how quickly the radiologists read images under the circumstances. “With everything going on, I didn’t think a radiologist would be available in the middle of Saturday night, but I decided to look into it,” Jenks says. “I ordered the MRI and received the results almost immediately.”

Meanwhile, across the street, Baylor College of Medicine stood like an island as the water rose around it. Concerned that the rising water and wind could cause a power outage, Marciel and Kumar worked with the information technology (IT) team, which includes both radiologists and IT specialists, to identify alternative ways to access images in the event of a power failure. 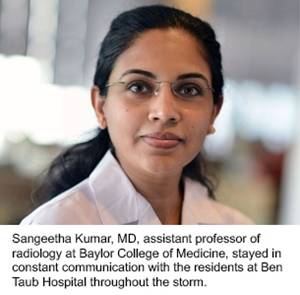 “We needed to be able to view the images from multiple sites, so we had to make sure we had a backup viewing system in place to access those images, even if different parts of the system went down,” explains Marciel, who along with Kumar remained committed to supporting the residents and patients at Ben Taub and the other hospitals they serve.

While Baylor never completely lost power, other hospitals that it serves experienced electrical failures. “When one hospital lost the ability to receive reports and the phone lines were down, we used encrypted email messages to stay HIPPA-compliant,” Marciel explains. “The technologists on the other end entered a username and password to view the email and attachment. They then printed the reports and hand-delivered them to the appropriate doctor, before scanning them into their PACS.”

“We identified key players among the medical directors and IT leaders, and the chair of radiology was instrumental in providing important updates,” Marciel says. “We formed groups that disseminated information about which roads were clear so that relief teams knew when they would be able to travel, and three times a day, our chairman sent communications about what was going on at every site. Communication flowed organically thanks to everyone’s willingness to respond throughout the disaster.”

As Baylor’s radiologists strove to maintain communication with other medical facilities and employees, Ben Taub Hospital’s basement became waterlogged. “At around 2 a.m. on Sunday, we were told that a pipe had broken in the basement and that the basement was off limits,” Carlton recalls. “The pharmacy and the kitchen are in the basement, so we no longer had access to the food services there.” 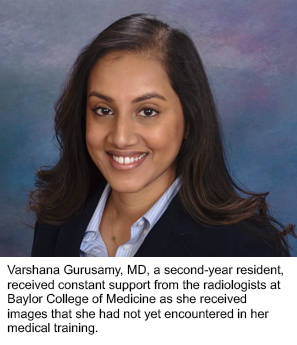 As the hospital struggled to recover from the flooding, personnel prioritized call rooms for those who needed showers, leaving residents searching for other places to sleep. “The first sleep shift I took was in a pediatric emergency exam room, but it was nearly impossible to sleep between tornado warnings and hospital noise,” Gurusamy says. “I probably got between three and four hours of sleep the whole time I was at the hospital.”

With rotating shifts, as one resident attempted to sleep, the other read images alone. “It was overwhelming,” says Gurusamy, a second-year resident. “On top of complicated studies ordered by the medical intensive care unit, the emergency department ordered an emergent cord compression spinal MRI, a study I hadn’t learned to read yet. The attendings at Baylor remained supportive, however. I called, and they walked me through everything I needed to do.”

Soon, Baylor faced its own challenges with flooding. Baylor had installed floodgates in the basement after Tropical Storm Allison, so the radiologists didn’t anticipate flooding near their main reading room. But on Saturday, the wall near their workstations began leaking, and it became clear that they would need to evacuate the area. 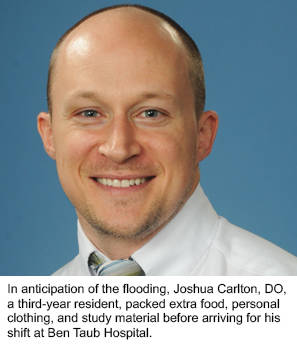 The team found a room on the floor above with ports for three workstations. With the elevators out, they had to lug their equipment up the steps. As the radiologists shared workstations in their makeshift reading room, the technologists helped ensure that no exams were overlooked.

“It was challenging to share workstations, because we had to log in and out each time we received a page, and we were sometimes paged at the same time. But we never lost connectivity,” says Kumar, who applauded the hospital’s maintenance crew for diligently mopping and pumping water out of the basement to save their primary reading room from total destruction.

Even as Marciel and Kumar evacuated their reading room, they never lost touch with the residents at Ben Taub. “The moment I saw the leak next to the reading room on Saturday night, I gave my mobile number to both of my residents,” Kumar says. “In case I had to vacate the room, I wanted them to still have immediate access to me.”

Gurusamy was particularly grateful for this. “Dr. Kumar and Dr. Marciel were always reachable. I don’t know how or when they slept,” she says. “I can’t downplay how encouraging it was when we could reach them at any time, day or night.”

The residents were finally relieved from Ben Taub, and Kumar was able to leave Baylor on Monday, Aug. 28. Marciel headed home on Tuesday. All were exhausted but optimistic. 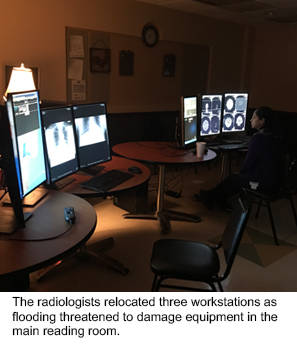 “You can’t control what Mother Nature is going to do, but with everyone working together and stepping up to do their part, we made it through without compromising care,” Gurusamy says. “It was truly amazing and positive to see people come together to help one another.”

Carlton echoes this sentiment and says that the experience gave him a renewed appreciation for the medical team. “As a radiologist on a typical shift, people come with questions, and there’s not much connection. But when you go through a crisis together and everyone is cooperative, considerate, and professional, you develop a sense that you are all on a team and can rely on each other,” he says.

While Hurricane Harvey wreaked havoc on the Houston area, the radiologists learned a lot from the experience: most importantly, that solid communication is essential for maintaining effective patient care during a disaster.

“Determine who will be your central communicator and how you will disseminate information before the situation gets bad,” Marciel suggests. “Think outside the box, and try to have a good attitude. Tremendous attitudes and an overall willingness to communicate are what got us through the crisis.”

The experience also gave the radiologists a renewed connection to their patients. “During a natural disaster, it becomes even more apparent that radiology is essential to diagnosis and treatment,” Marciel says. “It helps you refocus and understand that patients and physicians are waiting for these reports, regardless of whether it is a normal day or if there is a hurricane.”