The Benefits of Collaboration 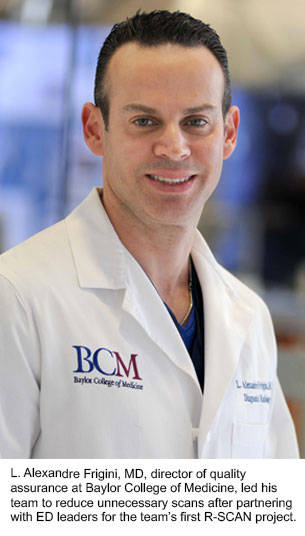 A 2012 study published in the journal Emergency Medicine Practice found that each year in the U.S. as many as 900,000 people will suffer from acute pulmonary embolism (PE).1 The classic presentation of PE is the abrupt onset of pleuritic chest pain, shortness of breath, and hypoxia. However, most patients with PE have no obvious symptoms at presentation.

To begin diagnosis and treatment of PE, emergency medicine physicians often immediately order chest imaging; however, not all of those scans are warranted, according to evidence-based appropriate use criteria.

Here’s how one large academic medical center leveraged the Radiology Support, Communication, and Alignment Network (R-SCANTM) step-by-step action plan to collaborate with physicians in its emergency department (ED) and reduce inappropriate imaging by more than 52 percent.

Reducing inappropriate imaging is a “passion project” for L. Alexandre Frigini, MD, director of quality assurance and a member of the quality committee at Baylor College of Medicine in Houston, Texas. An associate professor in the department of radiology at Baylor, Frigini teaches quality improvement to medical students and radiology residents and has created a quality improvement and patient safety “boot camp,” which incorporates principles from Imaging 3.0™, the Choosing Wisely® and Choosing Gently® campaigns, clinical decision support, and practice quality improvement (PQI) projects.

When Frigini first heard about R-SCAN, he knew it provided an invaluable platform to bring together the radiology team with referring physicians in implementing a PQI project to reduce inappropriate imaging. One of the Choosing Wisely topics available under R-SCAN is CT Angiography (CTA) for PE. Frigini determined that he and his team should begin their R-SCAN quality improvement journey with that topic.

Partnering with the ED

The Baylor radiologists chose the PE topic due to a perception that patients were receiving too many unnecessary scans, thus making it one of the areas that would provide the most impact to the hospital. Frigini and his radiology colleagues, in partnership with ED leaders, chose to focus on the PE topic as their first project for two reasons.

First, radiologists believed that too many unnecessary scans were being ordered for ED patients that did not meet the CT pulmonary angiography (CTPA) criteria protocol. Second, the team wanted to partner with an interested group of clinicians. Since the ED chief is a champion of quality improvement and the Choosing Wisely campaign, he was receptive to R-SCAN.

To begin the R-SCAN project, Frigini approached Shkelzen Hoxhaj, MD, MPH, MBA, former chief of emergency medicine at Baylor College of Medicine, expressing his concern and desire for change. Frigini was surprised by the response. Hoxhaj, a leader in quality improvement, also believed Baylor’s ED physicians ordered too many unnecessary scans, partly due to lack of awareness of and education about CT appropriate use criteria.

“The chief was extremely supportive and on board right away,” explains Frigini. “He agreed there was an issue with unnecessary imaging for suspected pulmonary embolism. Luckily, we had that initial buy-in, which made it possible to collaborate on an R-SCAN project and eventually change the ordering pattern.”

Frigini and his team embarked on an R-SCAN campaign to evaluate the rate of the inappropriate CT chest PE protocol in the Baylor ED. They used R-SCAN and applied both Choosing Wisely guidelines and the CareSelect Imaging® clinical decision support tool to evaluate appropriateness criteria.

Here’s how the R-SCAN project unfolded:


Evaluation of the baseline data demonstrated that a quarter of the cases showed inappropriate imaging. The radiology team was particularly concerned that ED clinicians were not ordering D-dimer blood tests for patients with a low probability of PE and ordering CTPA for patients with negative D-dimer results. If a D-dimer test is negative, a CT scan is not appropriate.

In fact, more than 18 percent of inappropriate CT PE protocol studies were ordered for patients who did not have a D-dimer test. “ED protocol in our institution requires all patients with low probability of PE to have a D-dimer test prior to obtaining advanced imaging studies, which is also recommended by the Choosing Wisely campaign,” says Frigini.

“More importantly and surprisingly, the baseline evaluation revealed a high rate of patients who, in spite of a low clinical probability and a negative D-dimer result, still went on to have a CT chest PE protocol. Many times, the patient was getting a CT scan even before the D-dimer results were back from the lab,” Frigini adds.

With the baseline study showing a high rate of unnecessary CT imaging for PE, the team implemented and measured the efficacy of an educational intervention among referring physicians. For the intervention, Frigini and his colleagues used R-SCAN’s educational tools for PE to help modify the physicians’ ordering pattern. The team established one-hour emergency medicine grand rounds to reduce the rate of inappropriate exams.

With the help of Hoxhaj, who played a prominent role in the educational intervention, the grand rounds gathered together clinicians, residents, and medical students to educate them about appropriate ordering of CTA for PE, including the need for a D-dimer test.

The educational intervention began with an overview of the PE project, followed by a discussion of cases and visual examples. This consisted of a presentation of study results, a presentation of the Choosing Wisely campaign, and an ACR video on appropriateness criteria. As part of the presentation, Hoxhaj also reviewed guidelines from the Society of Academic Emergency Medicine.

Radiologists found that when clinical leaders presented physicians with recommended changes in the image ordering pattern, the outcome was much more positive. “It is best to work with clinician leaders and have them present the information as their own,” says Frigini. “If we talk to them as radiologists, there might be more pushback and less acceptance.” 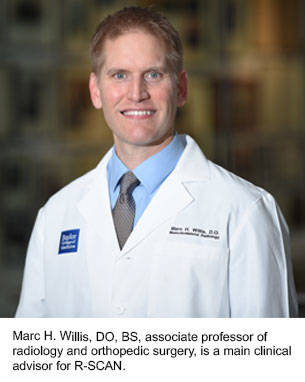 Marc H. Willis, DO, associate professor of radiology and orthopedic surgery, part of Frigini’s team and one of the main clinical advisors for R-SCAN, adds, “One of the things I really like about R-SCAN is that it’s not just radiologists doing process improvement or quality improvement within their department, it is a framework and resources that facilitate multispecialty, collaborative quality improvement and teamwork.”

He continues, “What was particularly helpful to the success of our project was having buy-in and support from our ED leadership. Dr. Hoxhaj presented the recommended evidence-based clinical guidelines and introduced R-SCAN at a grand rounds. It validated that we were aligned and all working together to provide high-value care for our patients.”

After the R-SCAN educational component was implemented, the team evaluated a new set of 100 PE CTs and compared the appropriateness scores to the baseline. They found that inappropriate use of imaging tests decreased by 52 percent, including:

As part of its continuing education efforts, the team now posts the imaging guideline indicators on computers and within the emergency room. It also periodically sends email blasts, continually reminding ED faculty, residents, and allied health personnel of the correct imaging protocols.

“The attending physicians may be more or less the same people throughout the year, but we always have new residents and medical students,” says Frigini. “In order to sustain good habits, information has to be reiterated frequently.”

Frigini’s team is also working with the IT department to implement “hard stops” in the future ordering process. Before clinicians order a CT scan, they will have to enter a patient’s Wells criteria and D-dimer test results, if applicable. If the clinicians fail to enter this information into the patient’s electronic medical record, the system will prevent ordering a CT scan.

“When a patient can benefit from having an ultrasound, then you don’t have to do a CT scan,” says Frigini. “You may get the same answer from a test that is not only less costly but also safer for the patient. If we can minimize any further harm to the patient, then that’s definitely a big deal.”

The Benefits of Collaboration by American College of Radiology is licensed under a Creative Commons Attribution-NonCommercial-NoDerivatives 4.0 International License. Based on a work at www.acr.org/imaging3. Permissions beyond the scope of this license may be available at www.acr.org/Legal .

Amena Hassan is a freelance writer