Radiologists in Mississippi create a special order for outside imaging consultations.
Get a PDF version of this Case Study
Download 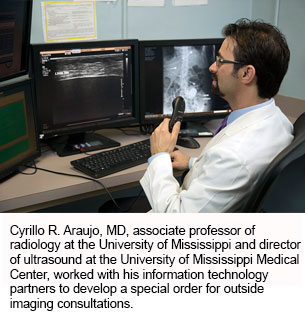 As a quaternary care and Level 1 trauma center, the University of Mississippi Medical Center (UMMC) emergency department (ED) receives up to 20 patient referrals a week.

Most of these patients come from smaller community hospitals with imaging studies and preliminary reports that don’t always match the presenting clinical picture or mention the specific details required for surgical or medical management. Sometimes these patients arrive without reports at all.

To ensure these patients receive appropriate care, the ED clinicians frequently turn to UMMC’s radiology team for help. In response, the radiology team has developed a special electronic health record (EHR) order for outside imaging consultations.

In the past, when clinicians had questions about an outside imaging exam, they either ordered a repeat study — subjecting the patient to often unnecessary radiation exposure and costs — or asked the radiologists to reinterpret the outside study through either a “curbside” interpretation involving verbal responses to specific clinical questions or a second read with a fully dictated report of the outside images.

While reinterpreting the outside study was preferred over unnecessarily repeating the exam, neither reinterpretation method was optimal for patient care. Here’s why.

The curbside interpretations were insufficient because the admitting clinicians wanted written reports, “not some hearsay about what you understood the radiologist to say, which could sometimes cause friction between the ED physicians and the admitting providers,” says James C. Kolb, medical director of UMMC’s ED. While the secondary reads included the documentation the clinicians wanted, they were time consuming to produce and were often insufficient because they didn’t directly answer the clinicians’ specific questions.

“We might do a perfect, very descriptive report, but we wouldn’t necessarily answer the question the clinician had regarding that study, because we never talked to the clinician to know what question he or she had in the first place,” says Cyrillo R. Araujo, MD, associate professor of radiology at the University of Mississippi and director of ultrasound at UMMC. “We found that simply reinterpreting the study was not adding value and frequently delayed patient care, because we would say in the report that the study was suboptimal or the wrong protocol or imaging modality was utilized (which meant the study had to be repeated anyway). We had to create a better process to improve efficiency and patient care in the ED.”

To resolve these issues, Araujo and his team coordinated with the radiology department’s information technology experts to develop a special EHR order for outside imaging consultations. Here’s how it works: When a clinician has a question about an outside imaging study, he or she calls the radiology department, and a radiology navigator — a team member who answers the phone and performs other administrative tasks in the imaging department —  gets the appropriate consulting radiologist on the phone. (Read more about the radiology navigators at http://bit.ly/qualityassured .) After speaking with the consulting radiologist about the exam, the clinician fills out the consultation order in the EHR.

“For example, the ED physicians might have a piece of paper or a preliminary read from the outside institution‘s CT scan that says, ‘This patient has acute diverticulitis,’ and they need us to confirm whether the patient really has acute non-complicated diverticulitis — that’s it,” explains Araujo, the radiology department’s quality and safety officer. “We still look at the entire imaging study, but focus on the most acute and urgent findings. If there is any clinically relevant incidental finding, a need for additional imaging, or recommendation for other modalities, we also address that in the consult.”

Since implementing the program in January of 2015, the radiology team has consulted on more than 200 cases in the adult and pediatric EDs and in the interdisciplinary tumor board conference with the transplant surgery department. On the tail of this success, it plans to expand the program to the rest of the hospital.

“We believe and intend to prove that a radiology consultant model will be fruitful and more patient-centered, resulting in improved, safer care and decreased cost, radiation exposure, and repeat imaging,” Araujo says. “This approach will unearth the value that radiology as a specialty contributes to the care of patients while increasing clinician satisfaction and helping to strengthen relationships with referring providers.”

Already, the program is having an impact on patient management, with early data indicating that the consultations change the course of care more than 10 percent of the time. “We’re consulting using the outside imaging, improving efficiency in patient care in the ED, and making recommendations that can change the course of care for patients,” Araujo explains. “We are providing more than image interpretation; we are providing medical advice on further imaging or clinical steps based on the conversation and outside imaging findings.”

In one case, for instance, a patient arrived at UMMC’s transplant center with an outside MRI report showing multiple liver lesions suspicious for multifocal liver cancer, but a radiology consultation with a dedicated body radiologist revealed that the patient had cirrhosis, multiple regenerative nodules, and confluent hepatic fibrosis — but no cancer. In line with those findings, the patient was put on a routine screening schedule to monitor his condition without the need for cancer treatment.

Kolb says the program has made it much easier to consult radiologists in such cases, relieving a lot of pressure in the ED. “Instead of cobbling around and trying to get a radiologist to look at images off the record, we have a process for a formal consultation,” he says. “It gives us a concrete answer and a documented report in the chart to help us manage the patient better.”