Shaping Change from Within

Using R-SCAN™ as a transformation tool, a radiology group reduced inappropriate follow-up imaging by nearly 55 percent for patients with ovarian masses.
Get a PDF version of this Case Study
Download 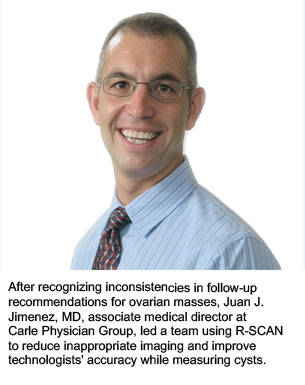 When the radiology team at Carle Foundation Hospital in Urbana, Ill., began receiving feedback from referring clinicians — primarily OB/GYN and family medicine providers — about the possibility of inappropriate follow-up imaging recommendations for ovarian masses, they knew they needed immediate action. The solution came in the form of the ACR Radiology Support, Communications, and Alignment Network (R-SCANTM).

After signing up for R-SCAN, the team selected the ovarian mass topic — one of 11 Choosing Wisely® topics — to address the situation. R-SCAN , which is funded through the Centers for Medicare & Medicaid’s Transforming Clinical Practice Initiative, is typically used to bring radiologists and referring physicians together to improve imaging appropriateness. However, the Carle team recognized an immediate opportunity to leverage the tool’s educational resources and ACR Select® clinical decision support (CDS) systems with its own internal team of radiologists and technologists.

Radiologists at Carle Foundation Hospital selected the ovarian cyst topic to resolve inconsistencies in how their pelvic ultrasound reports were being generated and variabilities in recommendations for follow-up care. The team began by gathering cases to obtain baseline data for the R-SCAN project. They collected three months’ worth of studies — some 300 exams that had the words “ovarian cyst” listed in the report — eliminating those reports that did not have all of the necessary documentation (such as detailed information about a specific cyst).

Juan J. Jimenez, MD, associate medical director at Carle Physician Group, says identifying high-quality retrospective finding reports for the project was imperative. “If your reports aren’t hitting those key pieces of information, such as the size of the lesion and the degree of complexity, then it becomes impossible to accurately characterize for the purposes of tracking compliance with the Choosing Wisely recommendations,” he adds. The team wound up with a total of 64 cases, which they entered into ACR Select in the pre-intervention phase of the project.

The Dig for Data

Through the ACR Select analysis, Jimenez and his team discovered inconsistencies in how the radiologic technologists measured ovarian cysts and variances in how they characterized the complexity of the cases. “We found that our technologists were putting in measurements and describing a lot of findings on the scans that weren’t necessarily clinically relevant,” Jimenez says. “As a result, our radiologists were compelled to discuss those measurements and findings within the report and make follow-up recommendations for CTs based on this irrelevant information.”

Realizing how heavily they were relying on their technologists’ judgment, the radiologists knew they had to get the entire radiology team on the same page to achieve the necessary congruence with standard imaging guidelines. To that end, Jimenez says his first objective was to develop an educational intervention for both radiologists and ultrasound technologists. 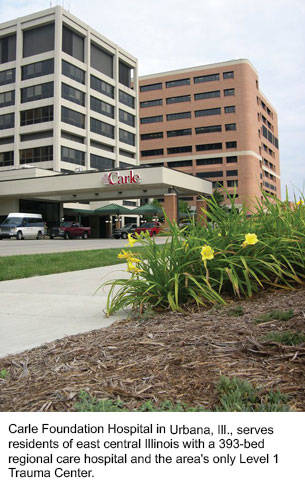 “My goal was to educate our radiologists who are dictating ultrasound reports and our technologists about the ACR’s evidence-based recommendations not to image clinically inconsequential adnexal cysts,” Jimenez explains. “We wanted to achieve improved compliance with these recommendations.”

Jimenez and his team implemented the intervention by presenting the recommendations at a departmental meeting for radiologists and a staff meeting for technologists. Radiology imaging manager Anne Finfrock RT(R)(N)(CT), CNMT, and the practice’s informatics department used data mining and keyword searches to identify cases for the project.

The group learned how to better identify the ovarian cysts, observe their documented size, and determine whether the image order follow-up recommendations aligned with the ACR Appropriateness Criteria® and other evidence-based guidelines, such as the Society for Radiologists in Ultrasound consensus statement. “Anne was instrumental in helping to establish technical staff buy-in to the project and in delivering the education our staff needed to ensure project success,” says Jimenez.

Jimenez and his team also developed an educational presentation and posted it on the radiology department’s website. The presentation provides answers to questions at the point of care, mainly for technologists. It also links to clear-cut visual examples of what constitutes different cysts, as well as recommendations for varying premenopausal versus post-menopausal ovarian cysts. “Our technologists now understand that while scanning, for example, they don’t have to put calipers on something and draw attention to normal follicles,” Jimenez says.

The sonographers now have a more standardized set of follow-up criteria, Finfrock adds. “It allows them to confidently report measurements and findings, knowing they will be in line with the radiologist’s recommendation,” she says. “We have the physicians and sonographers working together to better our patient care, all while learning and growing in their field. They were able to be a part of something that directly impacted their workflow, which cultivates engagement while improving our standard of care.”

“Now we are much more diligent about measuring cysts correctly and describing the complexity of the findings accurately,” Jimenez says. “As a result, we had an immediate improvement on the quality of our reports.”

Jimenez credits the project’s success to the resources and structure R-SCAN provides. R-SCAN’s easy-to-follow templates and simple case entry system make these projects accessible to any radiology practice, he says. “R-SCAN is probably the best thing that could have happened to radiology quality,” Jimenez contends. “You don’t have to be a high-end academic institution to improve outcomes with R-SCAN. It’s essentially turnkey; all you need to do is collect your cases and enter them.”

Radiology department unit office coordinator Sharadyn Ciota assisted with the data collection and entry. “The support we received from the ACR team while using R-SCAN was amazing,” Ciota says. “Once the data entry was complete, the reports generated by R-SCAN were easy to understand and plainly demonstrated our areas for improvement. These insights were invaluable in defining corrective actions — such as determining the most common reason for an inappropriate follow-up recommendation, which groups of people were most affected by an improper follow-up recommendation, and measuring the success of our actions to improve quality and patient care.”

Jimenez adds that patients also benefit from less repeat and follow-up imaging when practices improve imaging appropriateness through R-SCAN. “It lowers the cost and diminishes the inconvenience to the patient. It also frees up resources within the system to accommodate patients who really need imaging,” he notes. “In addition, it reduces anxiety, a less-easily measured benefit. Many patients who were reading their imaging reports on our patient portal became alarmed, sometimes unnecessarily. If we, as radiologists, can avoid mentioning ovarian lesions that are of no clinical significance in our reports, then our patients are less likely to worry about them.”

Additionally, Jimenez’s staff found that R-SCAN provides a user-friendly way to access CDS tools and the ACR Appropriateness Criteria. “I’m a huge champion of CDS, and R-SCAN provides a safe haven,” Jimenez explains. “If you told me five years ago that I’m not supposed to recommend an MRI until a cystic mass gets to seven centimeters, I would have probably disagreed with you. But now I feel comfortable making that recommendation, because it’s part of the Appropriateness Criteria. The evidence is out there to guide our recommendations.”

Jimenez states that his group’s success with R-SCAN and the impact on the practice is multi-factorial. “We had contributions from both the radiologists and the technologists, and the quality of our reporting has improved because we’re now more cognizant of it,” he says. “Working with the technologists to achieve this goal was rewarding because it gave us results that we can all take pride in.”