How did an innovative, multi-state radiology practice enhance incidental thyroid nodule detection and management?
Get a PDF version of this Case Study
Download 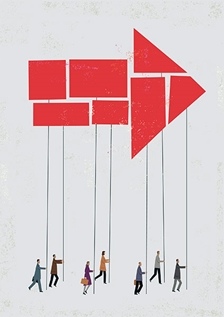 Radiology Partners has one simple but lofty mission: to transform radiology. With 104 locations and 190 full-time radiologists, the group believes other practices can learn from its deep focus on providing quality patient care, which showcases the importance of radiology within the entire health care paradigm.

But how does Radiology Partners, often referred to as “RadPartners,” which is headquartered in Southern California, differ from other practices? For starters, the group uses scale where it matters and “local” when it is needed. Despite its size and span, RadPartners is using techniques that can be applied across the board in radiology — among practices large and small.

RadPartners put its mission to transform radiology to the test recently when the idea to reduce variability in incidental thyroid nodule detection and management was proposed after members read and reacted to a JACR article published last July.1 Jay Bronner, MD, president and chief medical officer of Radiology Partners, explains that RadPartners physicians discussed the paper at one of its physician leadership meetings and realized the topic really resonated with them.

“As a group we decided, through collaboration and discussion among physician leaders, that it would be great to develop best practices for managing incidental thyroid nodules because they are common — 10–25 percent of CT scans of the chest have incidental nodules2 — and because they are typically poorly managed.”

At the time, few formal guidelines for detection and management of incidental thyroid nodules existed in the medical literature. So over a two-month period — filled with many virtual meetings, conference calls, and local discussions — RadPartners created its own set of best practice guidelines for thyroid nodule detection and management. This required a significant amount of education and execution, says Bronner. RadPartners asked three of its physicians to devote about half of their time to the thyroid nodule guidelines creation, and the group assigned one full-time program manager to the project.

“We had a team of people committed to moving this process forward,” he adds. “There’s a really big difference between thinking up an idea and making it happen.” The group even had a project planning sheet with 92 steps on it. To be statistically significant, they looked at 3,600 cases, comparing the practice’s performance pre- and post-adoption of the best practice guidelines. Bronner suggests that smaller practices could review fewer cases to look for improvement strategies.

Once RadPartners formalized a best practices document, it also created a video to inform its physicians about the guidelines. “Radiology is visual,” says Bronner. “The video showed examples of incidental thyroid nodules as well as techniques to measure them appropriately.” The video had 100 percent participation — meaning all 190 radiologists at RadPartners viewed it, and many offered their own feedback.

“We have dozens of physicians providing input into these processes. It does take some time, but we’re really harnessing the power of all our doctors,” says Anthony Gabriel, MD, chief operating officer of Radiology Partners. He adds that this collaborative process means that radiologists are eager to view the results of their hard work. “We gave them the tool to incorporate best practices into reports by making it available on the practice’s informational portal (“rad wiki”) to our physicians,” he adds. 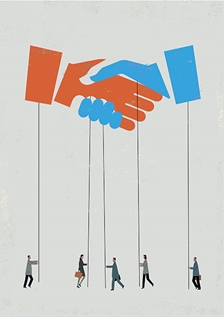 Gabriel says they initially based their best practices on a study in the American Journal of Neuroradiology, which showed that segregating decisions based on age and lesion size can reduce the number of unnecessary biopsies by 50 percent for incidental thyroid nodules — yet despite fewer biopsies, it did not reduce the detection rate of cancer.3 Not long after RadPartners pursued this initiative, ACR released a white paper on thyroid nodule management and detection.4

“When we saw the ACR guidelines after we had developed ours, we recognized they were almost identical. The ACR’s guidelines treated all nodules in a category of patients with significant comorbidities as insignificant, not requiring further follow up. After review, our medical leadership felt that this was an enhancement, and we modified our best practices accordingly,” says Bronner. “The ACR white paper was reinforcing and helpful in engaging our physicians. It added to their conviction that we were doing the right thing.”

The reaction from hospital partners has been overwhelmingly positive. Bronner says one of their client hospital systems calculated the savings from this initiative. By reducing unnecessary ultrasounds and presumed biopsies (about 50 percent of patients), they determined the savings to be more than $300,000 for the hospital system. “It’s a really powerful number, and that is just for thyroids,” says Gabriel. “Now we’ll pursue the same model to look at other organ systems, with the objective of improving quality while eliminating unnecessary health care resource utilization.”