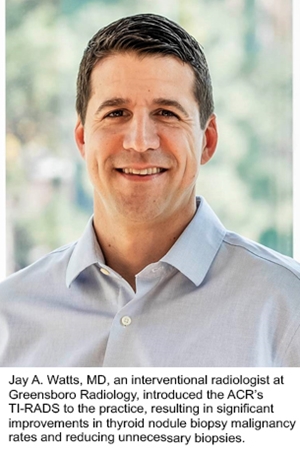 When the interventional radiologists (IRs) at Greensboro Radiology in North Carolina implemented a system to track thyroid nodule management, they found that many of their patients were undergoing unnecessary biopsies and follow-up procedures. The findings were noteworthy but not surprising: Thyroid ultrasound uncovers nodules in most adults, and research shows that over 98 percent of these nodules are benign — meaning that biopsies and follow-up procedures are usually unnecessary.1,2

Knowing that such unwarranted care creates unnecessary anxiety for patients, as well as unnecessary costs for health systems, Greensboro’s IRs were eager to address the issue. “For many of our referring physicians, we are viewed as the thyroid nodules experts and are in the best position to triage patients, ensuring that they receive the most appropriate care based on their clinical conditions,” says Jay A. Watts, MD, head of Greensboro’s IR section.

The challenge was finding a way to more efficiently manage the process. When Watts learned about the ACR’s Thyroid Imaging Reporting and Data System (TI-RADS), which includes a lexicon for describing thyroid nodules and a risk stratification system for biopsy recommendations, he knew he had a solution. ACR TI-RADS helps improve the accuracy and specificity of thyroid management recommendations, which is exactly what Greensboro’s IRs needed to reduce unnecessary care, Watts says. “With ACR TI-RADS, we can make a direct impact on patient care, further demonstrating our value as integral members of the medical team,” he says.

Since adopting ACR TI-RADS in 2017, Greensboro’s data show that the practice has performed 6.5 percent fewer thyroid nodule biopsies, with a 2.5 percent improved malignancy detection rate. “With ACR TI-RADS, we’re doing fewer biopsies, which means we’re saving patients from unnecessary procedures — and the time and the expense associated with them,” Watts says. “It’s beneficial to both patients and referring physicians. Instead of saying, ‘There’s a nodule there. Period,’ we’re saying, ‘There’s a nodule there. This is what you should do with it.’ We’re truly impacting downstream care.”

Overdiagnosis of thyroid cancer in the United States, defined as “diagnosis of thyroid tumors that would not, if left alone, result in symptoms or death,” accounted for 70 to 80 percent of cases in women and 45 percent of cases in men between 2003 and 2007, according to a 2016 study published in The New England Journal of Medicine. To help reduce unnecessary biopsies, the ACR published ACR TI-RADS management recommendations in 2017, and then started the ACR TI-RADS Thyroid Ultrasound Registry, which tracks the system’s impact and accuracy.

Jenny K. Hoang, MBBS, a neuroradiologist and associate professor in radiology and radiation oncology at Duke University, was an original member of the TI-RADS Steering Committee and continues to lead the TI-RADS registry. “We were hearing from ACR members how common benign thyroid nodules are and how many unnecessary biopsies they were conducting,” she says. “We believed that ACR needed to create thyroid nodule reporting criteria to help radiologists improve imaging utilization.” 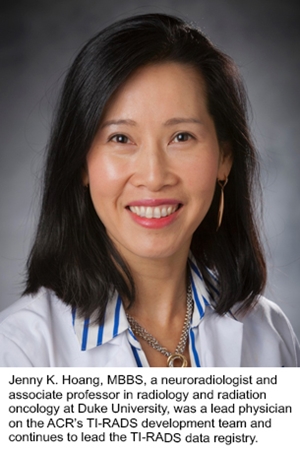 Hoang has known Watts for more than a decade, since she supervised his residency at Duke University Medical Center. They reconnected in 2016, when Watts read the white paper on ACR TI-RADS Lexicon that Hoang co-authored. When Watts expressed interest in implementing ACR TI-RADS at Greensboro, Hoang knew his strong leadership and relationship skills were vital to its success. “Jay has the elements of leadership that are really important in change management: Getting your practice to look at something in a new way, to go along with what you say, and to keep moving so as not to revert back to old ways,” she says.

Implementing ACR TI-RADS at Greensboro started with a meeting that Watts facilitated among members of the practice’s IR section — who are responsible for reading all thyroid ultrasounds and performing or supervising all thyroid nodule biopsies. During the meeting, the IRs discussed the system and expressed strong support for adopting it.

The team was already familiar with the concept of tracking thyroid nodules, thanks to an internal IR procedure and procedural results tracking platform already in place at Greensboro called Global Radiology Information Portal (GRIP-IR). All eight IR doctors were immediately open to transitioning to ACR TI-RADS, as was Greensboro’s leadership, Watts says. “We realized it was going to take effort to implement, but we believed it would be better for patients, and our data proves that it is,” says Heath K. McCullough, MD, a member of the IR team.

Watts notes that securing the team’s buy-in was important because ACR TI-RADS changes the radiologists’ workflow. Rather than just recording the size of a thyroid nodule, radiologists must provide detailed descriptions about the composition, echogenicity, shape, margin, and echogenic foci to determine the nodule’s suspected malignancy rate — a process that can double the amount of time it takes to read and report a thyroid ultrasound, Watts says. “It takes some time to get used to this new approach to reporting, but it doesn’t take long before it becomes second nature,” he says. “The benefit to patients is worth it since they no longer have to undergo the pain and worry of biopsies unless the nodule meets TI-RADS criteria.”

Greensboro’s GRIP-IR system, which Watts developed in 2015 in collaboration with Canopy Partners (Greensboro Radiology’s MSO and IT company) in order to provide IR procedure information to Greensboro’s main hospital partner, Cone Health, gave them a head start in implementing TI-RADS. The in-house platform includes templates for tracking whether biopsies were diagnostic or non-diagnostic and whether thyroid nodules were benign, malignant, or indeterminate. It also records complication rates based on Society of Interventional Radiology criteria. 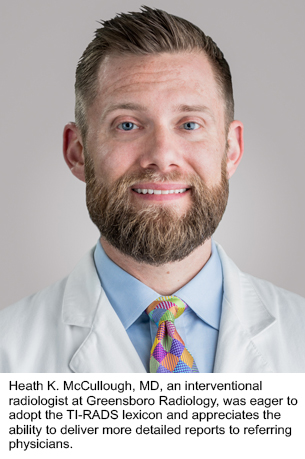 The “user-friendly” system walks the IRs through the process so they know the size-based criteria for each type of nodule, from TR1 (benign) to TR5 (highly suspicious), and can coordinate next steps in the thyroid management plan. “I don’t have to explicitly remember the criteria for a TR4 nodule,” says Watts. “That’s especially important in the beginning when you’re first getting used to the lexicon.”

Once Watts and his team had TI-RADS in place, they began informing care partners about the new reporting system. Greensboro sponsored a dinner and a lunch for referring physicians, including a large ENT group, during which Watts presented the goals of ACR TI-RADS and its benefits to referring physicians, including that the findings reports would be more comprehensive and thorough — giving the referring physicians greater confidence. “I wanted to get out front and talk to people about this new approach to making more meaningful thyroid management recommendations,” Watts says. “I really wanted our referring doctors to know that we are not doing this haphazardly; we are doing this in conjunction with the ACR.”

Todd M. Gerkin, MD, general surgeon at Central Carolina Surgery who refers patients to Greensboro Imaging, attended one of the group’s explanatory dinners and immediately embraced the change. He particularly appreciates the descriptive nature of the new reports, which he reviews page by page with each of his patients. “The studies are really important to me and my patients,” Gerkin says. “I use them pretty much every day that I’m in the office.”

Gerkin has even adapted his treatment practice thanks to ACR TI-RADS. Previously, Gerkin would order another ultrasound for patients with nodules every six months for an indefinite number of years. Now, he uses the IRs’ ACR TI-RADS-based recommendations and follows patients once a year for up to five years, stopping if their ultrasounds remain stable. “It’s good for the patients because there’s a defined end point now,” he says. “I like it, and the patients like it.”

The five quarters before adopting ACR TI-RADS, Greensboro’s overall malignancy rate aligned with the national average, around 6 percent, meaning that 94 percent of the nodules that the team biopsied were benign or indeterminant. 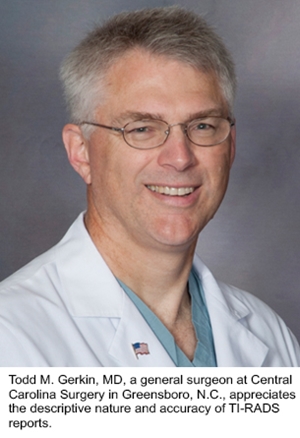 What’s more, the IRs can now use the TI-RADS criteria to confidently report the likelihood of a patient’s nodule being malignant. This means that patients who previously underwent annual thyroid ultrasounds can now have more confidence that, in the absence of an extenuating circumstance, they do not need to continue to with repeat sampling or ongoing follow-up. “The TI-RADS lexicon allows us to be more definitive with our recommendations to referring physicians, including stating that this patient does not require any additional imaging follow-up,” Watts says.

Chapman T. McQueen, MD, a surgeon with Alamance Ear, Nose and Throat in Burlington, N.C., says ACR TI-RADS has made “a huge difference” for his practice and its patients. “We’re reviewing fewer biopsies, and for the ones that we are reviewing, the predictive value is much better. We’re picking up a higher percentage of cancer in a smaller number of ultrasounds and biopsies,” McQueen says.

Soon after implementing ACR TI-RADS, Greensboro became one of seven radiology practices across 15 states to join the ACR’s TI-RADS Thyroid Ultrasound Registry. Greensboro is contributing its thyroid nodule data to the registry, which is still in its infancy.

The IR team is using the registry to monitor internal data and compare it to aggregate information from other practices across the country to spot any deviations that warrant review, Watts says. Contributing to the registry is a way to give back to the greater medical community because it helps to create a national benchmark for thyroid nodule management, he adds.

As practices participating in the registry acquire more data, Watts expects ACR TI-RADS to become even more accurate and refined. For example, the point value currently assigned to categories such as the shape of a nodule could change in the future as the data demonstrates which imaging criteria are more indicative of malignancy.

“This is the first iteration of a continually refined process that focuses on the important descriptive elements of nodules so that we are better able to differentiate the worrisome from the benign appearing nodules, and ultimately save people the hassle and expense of unnecessary biopsies and/or indefinite follow-up ultrasounds,” Watts says. “That’s what being a valued member of a patient care team is all about.”

Narrowing Down Nodules by American College of Radiology is licensed under a Creative Commons Attribution-NonCommercial-NoDerivatives 4.0 International License. Based on a work at www.acr.org/imaging3 . Permissions beyond the scope of this license may be available at www.acr.org/Legal .

Elizabeth Galentine is a freelance writer