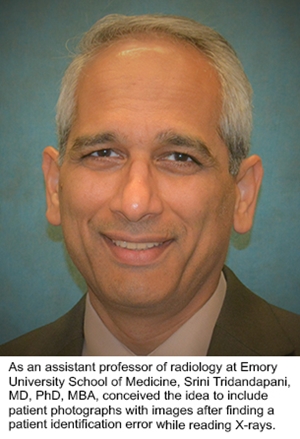 About eight years ago, Srini Tridandapani, MD, PhD, MBA, at that time an assistant professor of radiology at Emory University School of Medicine in Atlanta, was looking at two X-rays that were supposed to be of the same patient, when he noticed something amiss: One image showed a fractured bone, but the other showed the same bone intact. Tridandapani quickly realized that one of the images had been mislabeled — they were of two different patients.

As Tridandapani discussed the error with one of his colleagues, his cell phone rang. When he looked down at his phone, he immediately knew it was his wife because her photo appeared on the screen. That’s when Tridandapani began to wonder: Could photographs of patients help prevent wrong-patient errors at the hospital much the same way that photos on his phone alerted him to who was calling?

With this in mind, Tridandapani worked with a team of medical and engineering students to develop a system that would photograph patients and automatically attach their photos to their imaging exams in the hospital’s PACS. The radiologists could then compare the photos with photos already on file in the patient’s EMR to identify any imaging studies that had been erroneously assigned to the wrong patient.

Since Emory implemented the system in January of 2018, it has caught at least two patient identification errors before any harm resulted. The program has also generated positive feedback among radiologists who say the photos help with clinical interpretation and increase their empathy toward patients, allowing them to better correlate the images on their screens with the patients under their care. “The program has been a great success,” Tridandapani says. “We’re helping ward off errors, but we’re also improving patient diagnoses and care, which increases our value as radiologists.”

Patient identification errors like the one Tridandapani witnessed those years ago are not uncommon. In fact, a study that Tridandapani co-authored in 2015 showed that 67 near-miss patient identification errors (events detected and corrected before a patient is harmed) occurred over a 4.5-year period at two large academic hospitals.1 The study also found that wrong-patient errors, particularly near-miss events, are underreported at a rate of about 1 in 10 events.

To start, Tridandapani decided to develop such a system for portable X-ray machines, which are used for the most common imaging studies conducted at the hospital and are therefore the most likely to be involved in patient identification errors. “It made perfect sense to begin this program with X-rays, though we could certainly see a great potential to expand it to other modalities in the future,” Tridandapani says.

Before seeking hospital leadership’s approval for the project, Tridandapani got to work on a system prototype. Using existing funding, Tridandapani partnered with a Georgia Tech engineering student to build a wireframe model of the system using a digital camera. They rigged the camera with a sensor that detects X-ray signals and then automatically takes a picture of the patient as the radiograph is captured. They tested the system in the lab before connecting it to an X-ray machine or the hospital’s PACS. “We wanted to make sure the concept worked before we integrated it with the hospital’s network,” Tridandapani says. 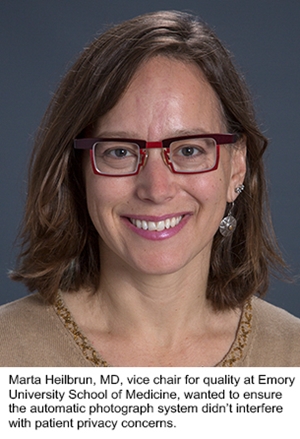 Simultaneously, Tridandapani partnered with a medical student to see how radiologists would react to having photo-graphs attached to imaging studies and to document the project’s clinical value. “We had to show that this initiative would work in a simulated setting in order to add some credibility to what we were trying to accomplish,” Tridandapani says. “We injected patient identification errors into the system and had 45 radiologists look at the cases without the photos attached and another 45 radiologists with the photos attached.” During the study, the proportion of errors that the radiologists detected increased from 31 percent to 77 percent when photographs accompanied radiographs.2

From there, Tridandapani began pitching his idea to photograph patients at the point of care to hospital administrators, technologists, nurses, and other radiologists around the country. During these meetings, Tridandapani used his prototype to demonstrate how the system would work without interrupting the technologists’ workflow. He also shared the results of his errors detection study but had trouble selling the idea based on the benefit of error reduction alone.

“The reason error rates are generally low is that people either don’t catch them or don’t report them,” says Tridandapani, who is now a professor and vice chair of imaging informatics in the radiology department at the University of Alabama, Birmingham. “It’s a shame because it’s led to a vast misconception that errors aren’t a problem, and they are.”

To overcome this, Tridandapani stressed that the photos would also provide clinical context to help radiologists deliver better patient care. “The photos show the patient’s physical condition, which may help indicate specific illnesses or symptoms. This information can help radiologists develop more accurate, concise reports,” he says. “What’s more, the photographs can include the patient’s monitor in a hospital room, so it’s possible to see their vitals, giving the interpreting radiologist more information about their heart rate, blood pressure, and respiratory rate — which reveal what is going on with the patient at that very moment that the radiograph is being obtained.”

While the benefits of attaching photographs to imaging studies were clear, some Emory providers worried about obtaining consent to photograph patients and about violating patient privacy. Fortunately, hospital administration felt that the existing photo permissions outlined in the care consent form that patients sign before undergoing treatment at the hospital addressed this concern. Tridandapani also worked with the hospital’s IT team to ensure the photos would be stored securely on the PACS with patients’ imaging studies.

“Patient privacy is essential, not only because it’s the law but also because we care about our patients’ personal information,” notes Marta Heilbrun, MD, vice chair for quality at Emory. “We, of course, wanted to make 100 percent certain that none of the photos were being passed to a different IT system that would put them at risk in any way.”

Along with privacy, Heilbrun says, stakeholders had one other concern when it came to photographing patients at the point of care: respect. Inpatients are often at their most vulnerable, and many are intubated and unable to communicate. To preserve patients’ dignity, the hospital’s technologists are always sure to cover patients with blankets and to move any tubes before taking the photos. “This is an opportunity to have a conversation with our technologists about how we respect our patients,” Heilbrun says.

By addressing these concerns and communicating with stakeholders, the team was able to generate strong support for the project, says Nabile Safdar, MD, MPH, vice chair for imaging informatics at Emory University School of Medicine. “We reached out to Emory Health Care’s chief medical officer and chief quality officer with some early studies about the perception of including patient photos with imaging studies,” Safdar says. “Dr. Tridandapani also reached out to the technologists who actually take the X-rays, as well as the nurses who assist with the exams. This outreach was critical to the program’s success.”

Putting It All Together 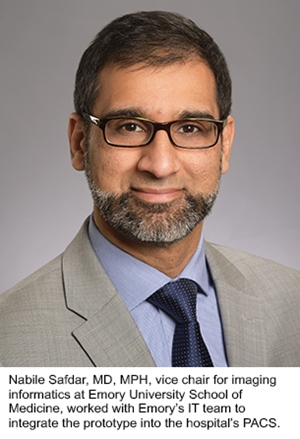 Once they obtained support for the project, Tridandapani and Safdar spent six months working with Emory’s IT team to integrate the system prototype into the hospital’s PACS and portable X-ray machines. As part of this process, Tridandapani created his own company, Camerad™, which received funding through a National Science Foundation Small Business Innovative Research Grant to support this integration. “We created Camerad because we wanted to make this technology easily and widely available to anyone who was interested,” he says. “We wanted to look at this as more than a one-off research project at a single institution.”

At that point, the system automatically sends the picture to the PACS folder where the patient’s imaging study will also be stored. When the interpreting radiologist opens the study, he or she will see both the exam images and the patient photo, which opens automatically. “It seems like such a simple thing, but when you see an X-ray, in some ways, it’s an abstraction. This program has made patients more visible to radiologists,” Safdar says.

In the year since Emory implemented the system, it has prevented at least two patient identification errors. It has also helped validate diagnoses when the patient’s physical condition visibly correlates with what the radiologist is seeing in a radiograph. “This program has the potential to save lives, ensuring that patients receive the care they need, when they need it,” Safdar says.

Based on these positive results, Tridandapani envisions eventually integrating the system with CT machines, as well. He believes it could provide critical clinical context for conditions like stroke, where a photo can portray valuable information about a patient’s physical condition to help focus the interpretation of a CT scan. “Having the ability to see a patient’s face and body is invaluable,” Tridandapani says. “It can help radiologists verify an illness or disease that could change the course of treatment completely.”

Reducing patient identification errors and improving clinical care are two goals that all radiologists should be working toward, and patient photos can help achieve these objectives. Practices that are interested in incorporating patient photos into their own systems shouldn’t hesitate to get started. “We strongly urge all radiology departments to consider the value of photos, both for identifying errors and improving diagnoses,” Tridandapani says. “We talk a lot about the value of providing a face to radiologists, who are often away from patients in the reading room. We should provide that same value when it comes to patients and their care.”

Lights, Camera, X-ray by American College of Radiology is licensed under a Creative Commons Attribution-NonCommercial-NoDerivatives 4.0 International License. Based on a work at www.acr.org/imaging3. Permissions beyond the scope of this license may be available at www.acr.org/Legal .