Radiologists give referring providers their direct phone numbers, increasing their role as partners in care.

Editor’s note: This case study is part of a new series called Imaging 3.0 NOW. Case studies in this series highlight simple initiatives that radiology practices can implement immediately to jumpstart or advance their Imaging 3.0 efforts.
Get a PDF version of this Case Study!
Download
Imaging 3.0 in Practice: Quick Wins
Download PDF 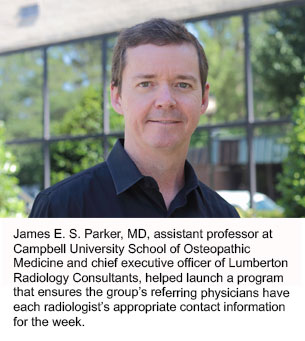 The radiologists at Lumberton Radiology Consultants in Lumberton, N.C., thought they had a good system in place for communicating with referring providers: A clinician would call with a question about a study, the radiology group’s clerical staff would take a message, and the appropriate radiologist would return the call as soon as possible.

But the system drew constant complaints from referring physicians. Rather than leaving a message and waiting for a radiologist to return their call, a process that sometimes delayed patient care, referring providers wanted to speak directly with a radiologist who could immediately answer their questions.

“We were filtering their requests through our clerical staff, thinking it would be more efficient if we called them in between cases,” says James E. S. Parker, MD, assistant professor at Campbell University School of Osteopathic Medicine and chief executive officer of Lumberton Radiology Consultants. “But it really wasn’t effective, and it infuriated a lot of providers. So we decided to make a decisive change.”

The radiologists met with several referring providers to discuss possible solutions to the issue. After considering a text-based application that was ultimately deemed too cumbersome, the radiologists established a simple phone-based program that allows referrers to call them directly any day of the week. Here’s how the program works:

When the radiologists launched the program two years ago, they promoted it during departmental and committee meetings and through announcements at the medical staff office. Today, they continue to add any referring physicians who are interested in the weekly email, which currently goes out to about 170 providers.

“If somebody calls our front desk who isn’t already receiving our email, we’ll offer to add them to our contact list and say, ‘The next time you call us, it will be easier, because you’ll know exactly where all of the radiologists are, and you can consult with them directly,’” Parker explains.

The radiologists initially worried that the calls might disrupt their workflow, but that hasn’t been the case. “I think most of our radiologists actually find it satisfying to resolve these issues quickly over the phone and help the providers out there,” says Parker, adding that the group receives about six calls a day.

Troy M. Sterk, DO, chairman of the department of medicine and hospitalist at Southeastern Regional Medical Center, who is also an ED provider with the Department of Veterans Affairs, says the program has greatly improved communication among ordering physicians and radiologists, and has, in turn, enhanced patient care.

“Over the last 10 to 20 years, we’ve become very fragmented in medicine, but with programs like this connecting all of the services, we get a better overall evaluation of the patient and avoid unnecessary delays in care,” he says.

What’s more, the program has helped the radiologists integrate more closely into the patient care team. “It’s dramatically improved the reputation of the radiologists for being helpful and collegial with our medical staff, which pays big dividends when you’re in a complex health care system,” Parker says.

Just a Call Away by American College of Radiology is licensed under a Creative Commons Attribution-NonCommercial-NoDerivatives 4.0 International License. Based on a work at www.acr.org/imaging3. Permissions beyond the scope of this license may be available at www.acr.org/Legal.