Get a PDF version of this Case Study
Download
Imaging 3.0 in Practice: Stewards of High-Value Imaging
Download PDF 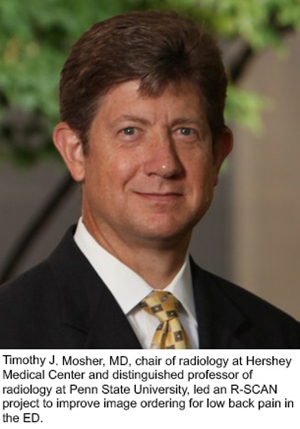 Suspecting that many emergency department (ED) patients were undergoing unnecessary plain-film imaging for low back pain, a radiologist at Penn State Milton S. Hershey Medical Center led a quality improvement project (QIP) to address the issue with ED providers. The result was a 43 percent reduction in inappropriate radiographic imaging for low back pain in the ED and a more than 35 percent reduction in utilization. Here’s how it unfolded.

Hershey’s radiologists and ED physicians heard about possible inappropriate imaging for low back pain in the ED in 2015, while working together on a separate QIP focused on lumbar spine MRIs. Following the success of that project, Timothy J. Mosher, MD, the medical center’s chair of radiology, suggested that the two departments collaborate on another QIP, this time using ACR’s Radiology Support, Communications, and Alignment Network (R-SCAN™).

As the Hershey team considered whether to enroll in R-SCAN, members noticed that low back pain was one of the available topics. Reminded of what they had learned about low back pain imaging during their last QIP, members agreed that R-SCAN afforded an opportunity to improve their ordering practices around low back pain in a structured way.

“We had an anecdotal sense that a large number of ED patients who didn’t meet the appropriateness guidelines were being imaged for low back pain,” says Mosher, who is also a distinguished professor of radiology at Penn State University. “R-SCAN provided a framework to verify the problem, measure the problem, intervene to improve imaging appropriateness, and follow-up on the effectiveness of our efforts.”

The team launched the project in the spring of 2016. The first step, as outlined by R-SCAN, involved a pre-intervention phase in which Mosher reviewed all of the cases of ED patients who had undergone imaging for low back pain during a three-month period, from April through June, of that year. Mosher worked with the medical center’s IT team to develop a computer script to automatically pull these cases — 202, in all.

While R-SCAN participants typically use CareSelect Imaging to digitally evaluate their cases based on the ACR Appropriateness Criteria ™, Mosher decided to evaluate his cases manually using evidence-based guidelines from the American College of Emergency Physicians (ACEP)  and the National Quality Forum (NQF) . These guidelines say to refrain from imaging patients for low back pain unless they have a history of conditions, such as cancer, trauma, IV drug abuse, specific neurological impairment, HIV, intraspinal abscess, or immune deficiency. Mosher says he chose to use the ACEP and NQF guidelines because they correspond with standards from multiple specialty organizations, including ACR.

Upon reviewing the cases against the guidelines, Mosher found that 44 percent of the 202 cases did not meet the defined appropriateness criteria. “This verified what we had suspected: that many low back pain radiographs in the ED were inappropriate,” he says.

Data in hand, Mosher moved to the educational intervention phase of R-SCAN, during which he focused on teaching the ED physicians about appropriate image ordering for low back pain. 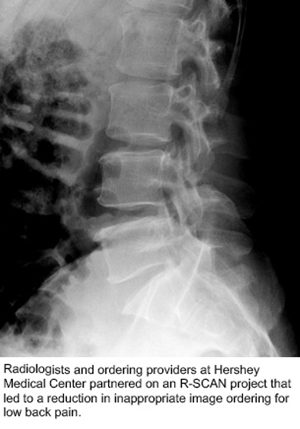 Working with the ED chair, Mosher sent the physicians copies of the ACEP and NQF guidelines and articles from the Journal of the American College of Radiology, the Journal of the American Medical Association, and Radiology (See links below) about appropriate low back pain imaging. He also met with the physicians outside of clinical hours to discuss the imaging guidelines and appropriate imaging.

Following the intervention, Mosher moved on to R-SCAN’s post-intervention phase. Using the same computer script as before, he pulled all of the cases of ED patients who underwent plain-film imaging for low back pain from July through September, expecting far fewer inappropriate exams. But he was disappointed when 42 percent of the cases still did not meet the guidelines.

Suspecting that something was amiss, Mosher looked to see who actually ordered low back pain imaging in the ED. He found that advanced practice clinicians (APCs), including nurse practitioners and physician assistants, in the ED’s quick-care area ordered 85 percent of the exams. His intervention had been directed at the wrong providers.

With this in mind, Mosher went back to R-SCAN’s interventional phase. He reached out to the APC liaison in the ED and asked about talking with the APCs about imaging appropriateness for low back pain. The liaison was receptive and invited Mosher to the APCs’ journal club the following week.

In preparation for the meeting, Mosher sent the APCs the ACEP and NQF guidelines, the articles about appropriate low back pain imaging, and the data he had collected during the pre-intervention phase. “I broke the ordering data up by faculty, residents, and APCs, so they could see that they controlled this and could take ownership of it to do better,” Mosher says.

During the meeting, Mosher spent nearly two hours reviewing the articles and talking about appropriate imaging with the dozen or so APCs in attendance. The APCs explained that the primary driver for low back pain imaging in the ED was patient satisfaction. They often ordered the imaging simply because patients wanted it.

“Patients come in with low back pain, and they expect something to be done,” says Joseph Laurito, who was the lead APC in the ED during the project. “In talking with Dr. Mosher, I thought about all of the X-rays I’ve ordered for patients just to make them happy and how many times the imaging uncovered something that was unexpected. The answer was: none.”

By the end of the journal club, the APCs resolved to change their approach to low back pain imaging. “We decided to start talking to patients about why we shouldn’t image for low back pain when it’s not indicated — it’s a waste of money and time, and it puts patients at risk for unnecessary radiation exposure,” Laurito says.

After the meeting, Mosher began analyzing low back pain cases and saw an almost immediate reduction in the number of inappropriate orders. He then passed this information along to the APCs to encourage them to continue their efforts.

“Sharing that success was important so they could see that what they were doing was having a direct impact on quality,” Mosher says. 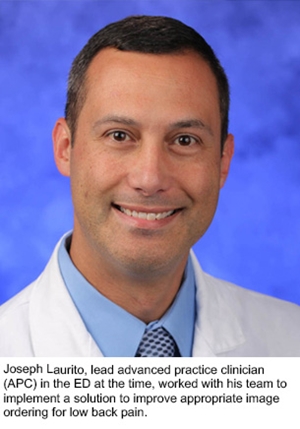 At the end of the year, Mosher again followed R-SCAN’s post-intervention phase. Using the same computer script from before, he pulled all of the low back pain radiographs that were conducted in the ED during the last quarter, October through December, and evaluated the cases based on the guidelines.

This time he found that only 25 percent of the studies were inappropriate. He also found that the number of radiographs ordered for low back pain was down to nearly 140 from about 220 the previous quarter — a more than 35 percent reduction in utilization.

“Not only did we cut the percentage of inappropriate exams almost in half, but overall we cut the number of exams by over a third,” Mosher says. “This reduction is good for patients because it reduces the risk of over diagnosis and unnecessary exposure to radiation. It’s also good for our health system, because it represents a significant cost savings, while demonstrating radiology’s contribution to the Triple Aim .”

Laurito agrees that the change has been good for patient care, without compromising patient satisfaction. “Just having that discussion with the patients, they quickly understand why imaging isn’t appropriate,” he says. “There haven’t been any arguments from the patients, in my experience.”

At the end of the project, Mosher used R-SCAN’s new Excel templates to upload his case data. The templates allow participants to track data points that aren’t part of R-SCAN reporting, while eliminating the need to manually enter cases into the portal. Mosher received a report, including graphs that showed an increase in high-value exams following the educational intervention.

Mosher credits the project’s success in part to how easy R-SCAN is to deploy in just about any practice setting. “We made a few modifications to the R-SCAN template to align with our needs, but it was pretty easy to use,” he says. “R-SCAN gave us a good roadmap for approaching our appropriateness challenges.”

For others who might be considering their own R-SCAN projects, Mosher suggests starting small. “You don’t want to bite off a huge project with a large amount of data and then realize you don’t have the resources to do it,” he says. “If you start with something manageable, you will have success and build little evangelists along the way. Once you have that buy-in, you can tackle other projects.”

For more information about R-SCAN, visit the website  or email rscaninfo@acr.org

These are the articles Mosher shared with the ED physicians and APCs:

• Low Back Pain in the Emergency Department — Are the ACR Appropriateness Criteria Being Followed? (http://bit.ly/JACRLowBackPain )

• Clinicians’ Perceptions of Barriers to Avoiding Inappropriate Imaging for Low Back Pain—Knowing is Not Enough (http://bit.ly/CliniansPerceptions )

Backed by Guidance by American College of Radiology is licensed under a Creative Commons Attribution-NonCommercial-NoDerivatives 4.0 International License. Based on a work at www.acr.org/imaging3. Permissions beyond the scope of this license may be available at www.acr.org/Legal.