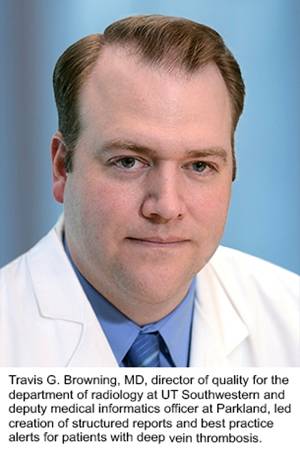 Deep vein thrombosis (DVT) is a serious condition that can lead to a life-threatening pulmonary embolism (PE). Anywhere from 60,000 to 100,000 people in the United States die each year of DVT/PE, and about 25 percent of those experience sudden death, according to the Centers for Disease Control and Prevention . For DVT patients lucky enough to make it to the hospital, prompt treatment is vital for survival.

With this in mind, radiologists at the Parkland Health and Hospital System in Dallas, Texas, consider DVT a critical finding that requires non-routine communication to clinical providers. Traditionally, this has meant that the radiologists immediately send a secure message to the ordering doctor whenever an imaging exam reveals DVT. But in a large healthcare system like Parkland, the doctor who ordered the test may not be the treating provider, so this communication method alone was not always effective for timely patient care.

To overcome this, leaders in the department of radiology at the University of Texas (UT) Southwestern Medical Center — which provides interpretive services for all of Parkland — leveraged their structured reporting elements for DVT findings on ultrasound to create a system that enables the hospital’s electronic health record (EHR) to understand the reports. The EHR then generates best practice alerts (BPA) that automatically pop up whenever providers open the charts of patients with positive tests who have not received anticoagulation treatment within the recommended timeframe. Along with the traditional secure critical result messages, this safety net system ensures patients receive the timely, life-saving care they need.

In the system’s first six months, the EHR generated alerts for 97 patients with positive DVT results in which anticoagulation had not been initiated within two hours. In 68 of these cases, the patients went on to receive life-saving anticoagulation medication. “We have a large, complex healthcare system, and information is at risk of being lost as different providers transition care for patients,” says Travis G. Browning, MD, director of quality for the department of radiology at UT Southwestern and deputy medical informatics officers at Parkland. “What this system does is identify a potential delay in therapy for what can be a life-threatening disease process. It helps ensure that patients receive the care they need, when they need it.”

The backbone of the system is structured reporting. UT Southwestern radiologists began developing structured reports for all radiology findings several years ago. The department formed a Structured Reporting Committee to create the reports with radiologists’ input and to ensure the templates were accurate, current, and readily accessible. The committee knew that standardizing the terminology and findings within the reports would make them easier for referring clinicians to read and understand than traditional narrative reports — leading to better patient care.

While structured reports have many benefits, “some radiologists struggled with the fact that they wouldn’t have control of the wording in their reports,” says Julia R. Fielding, MD, chief of the abdominal imaging division. “But over time, most radiologists realized that structured reporting makes for a more uniform system for improved patient care. Now, referring docs know exactly where to find the information they need right away, because the findings are always presented in the same order and the wording is always consistent.” 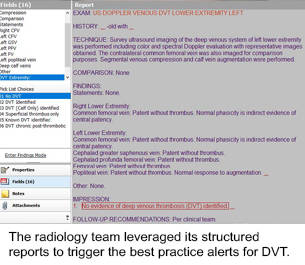 “The reason the compliance is so high is we gathered feedback over the years about what radiologists thought did — and didn’t — work with the structured reports, and we incorporated that feedback into our templates,” Browning says. Fielding monitored adherence and personally approached radiologists who weren’t using the reports to ask them to start using the system. This outreach helped further boost the compliance rate.

Like Browning, Parkland Chief Medical Information Officer Brett A. Moran, MD, was also concerned about untreated DVTs. Moran oversees a small team of deputy medical informatics officers that includes Browning, and he invites these physician informaticists to develop enterprise endeavors to improve patient care. “I encourage them to have some latitude in looking for opportunities of enterprise informatics work that can help the greater good for patient care, making things better, easier, faster, more effective or efficient,” says Moran, who was an internist for 14 years before transitioning to informatics.

With the structured reports in place, Moran and Browning began thinking about how to further leverage the new reporting format to help clinicians better care for patients. In line with Moran’s enterprise approach, they conceived the idea for the EHR and a BPA system. DVT was an attractive model for operationalizing the reports because it’s a straightforward test done for limited indications, making it easy to create a report that the EHR could understand.

Moran and Browning knew that if they could codify the DVT findings, they could implement a system in which the EHR would recognize the findings, track the outcomes of the DVT test, and fire a BPA when appropriate treatment wasn’t administered in a timely manner. Browning presented the idea to Fielding who gave him the go-ahead to pursue the project. Hospital administration approval wasn’t needed, Fielding says, because administrators already supported decision analysis and the use of BPAs.

In a meeting of abdominal radiologists, the doctors agreed to codify DVT findings with a picklist of options that the EHR would understand. Based on the findings, the radiologist would choose one of the options from the picklist and enter more detailed descriptions and care recommendations into a free-text field, when necessary. Over the next year, adherence to the DVT codified structured reporting reached 99 percent. After maintaining that high adherence for a few more years, Browning knew it was time for the next step — instituting the BPA. 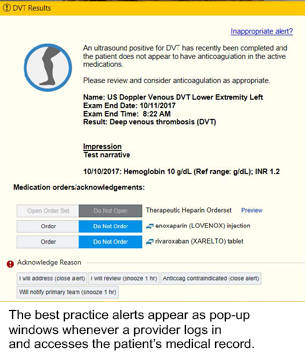 But first the team needed to know whether clinicians would find a DVT BPA useful. Browning spoke with Nainesh J. Shah, MD, an assistant professor in the division of hospital medicine at UT Southwestern who practices solely at Parkland, and another one of Parkland’s deputy medical informatics officers. Shah informally asked his fellow hospitalists about the concept. “The implications of a DVT miss are high, although the occurrence might not be,” Shah says. “It seemed like a worthwhile enterprise.”

Next, Browning and Shah secured project approval from Parkland’s Clinical Decision Support Governance team, which greenlighted the concept after ensuring it applied the “five rights” of decision support: the right information to the right person in the right intervention format through the right channel at the right time in the workflow. They also presented the idea and got support from the Enterprise User Group, a hospital committee with representatives from several specialties that scrutinizes technical changes to the EHR.

Browning and Shah worked to integrate the codified DVT report into the EHR and create the DVT BPA over the course of about six months. The project didn’t require extra funding beyond staff time; it took about 15 hours for the IT team to build and launch the alert. Browning and Shah represented their respective specialties and worked together to develop, implement, and test the alerting logic.

The six choices for a report for DVT are:

The radiologist chooses one of the six options. Four of the six will trigger the BPA — a finding of “no DVT” or “superficial thrombus only” will not trigger the alert. To start, Moran ran the pop-up alert on silent mode — making sure it worked without actually alerting any physicians. Once the team confirmed that the system worked properly, the enterprise user group gave the final go-live approval in late 2017.

Now, when Parkland patients undergo a Doppler ultrasound study for suspicion of DVT, not only will the radiologists follow standard practices and communicate abnormal results directly with the ordering provider, but the new structured reporting system will discretely identify positive findings. This triggers specific decision support for inpatient and emergency room patients if anticoagulation has not been ordered within two hours. The system serves as a secondary safety net to help clinicians deliver the right care to the right patient at the right time.

The alert appears as a pop-up window whenever a provider logs in and accesses the patient’s medical record. The alert triggers for all doctors, nurse practitioners, and physician assistants — even if they’re not on the primary team — but not for nurses, technologists, or administrative staff. “It’s not going to fire for every single person who opens the chart,” Shah explains. “We made it specific so that the people who would act on the alert get the alert. We need to allow clinicians to do the correct thing — they don’t need another alert to tell them to do something that they’re already doing.”

Providers must acknowledge receiving the alert and choose one of four options:

The four options were created to give providers discretion about how to care for patients. For example, the provider may have already decided that anticoagulation is contraindicated based on the patient’s comorbid conditions. Choosing “review” or “notify” snoozes the alert for one hour, providing another backup to ensure the patient is treated. 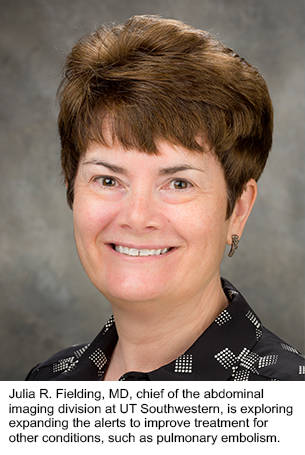 While many hospitals use BPAs, Parkland is taking the less common step of analyzing whether the alerts are helpful, Fielding says. In the first six months of 2018, UT Southwestern’s radiologists read 4,024 ultrasound tests for suspected DVT at Parkland hospital — and they used structured reports in 99 percent of the cases.

Of these, 455 patients, or 11.4 percent, were reported as positive for DVT. Anticoagulation was administered in less than two hours for 358 patients, so no BPA alert was triggered. An alert fired in the other 97 cases, with 68 of these patients receiving anticoagulation after the alert was fired, potentially saving lives or preventing serious complications.

The data can’t ascertain whether these 68 patients had fallen through the cracks or whether the physician already had a treatment plan in mind. “Sometimes there are appropriate reasons for a delay — for instance, the patient could be undergoing a surgical evaluation,” Browning says. “In other cases, providers are considering some other intervention, or they’re waiting for a specialist to come down and assess the patient before determining the ultimate therapy.”

Based on the DVT project’s success, Fielding’s abdominal imaging team is now working with the radiology chest division to study whether the alert concept can help improve treatment for PE. First, they must review the PE structured report to see whether they can create picklist options for the alert logic, like the six options for DVT. Not every health condition allows for a simple list that an EHR can understand.

Fielding says residents and fellows are currently working to see if they can develop a consistent picklist for PE findings. “After seeing the success with DVT, we really think this approach can work for other conditions to ensure patients receive the care they need.”

By leveraging their structured reports in this way, Parkland and UT Southwestern are taking the lead to improve patient care. “We recognize the importance of consistent structured reporting, and now we’re operationalizing our reports to further enhance care delivery,” Fielding says. “As radiologists, it is our job to provide straightforward, timely care recommendations that help drive positive outcomes. This project is helping us do that, reinforcing our commitment to high-quality patient care.”