Despite obstacles encountered as part of a pioneer ACO, radiologists at a Kansas-based group gained valuable perspective to inform their future goals. 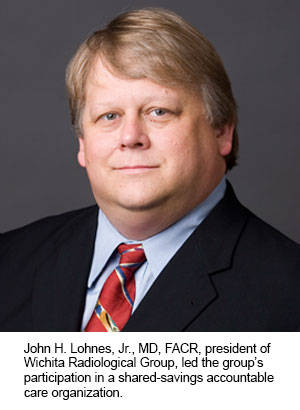 In July of 2013, radiologists at Wichita Radiological Group (WRG), in Wichita, Kan., became part of a physician-led, shared-savings accountable care organization (ACO). Comprised of primary care physicians and specialists, the ACO that WRG joined covered more than 16,000 patients, with the aim of providing quality care while reimbursing providers for reducing the total cost of care for the patient population.

In addition, WRG’s goals for participating in their ACO included equalizing the shared savings between radiologists and other physicians and developing their own insurance company through a clinically integrated network. After encountering several challenges during this shared-savings experience, the group decided to end its participation in this type of ACO, all the while viewing the process as a vital learning experience.

When radiologists at WRG partnered with other physicians, they knew their goal of achieving shared savings would require planning and adapting within their newly formed ACO. The group’s savings for government fiscal year 2015 was about $700,000, after approximate savings of nearly $5 million in 2014. “We saved money, but it was a drop in the bucket of Medicare spending,” says John H. Lohnes Jr., MD, FACR, president of Wichita Radiological Group. “Total projected spending on our attributed patients for 2015 was about $148 million.”

Although the group saved about $5 million in 2014, the ACO didn’t actually qualify for a return because CMS did not subtract high-cost outliers, as the agency originally advertised. The ACO’s second-year savings of $700,000 was too low to generate any return of those savings per the CMS’ guidelines. “But we did distribute approximately $2,500 per physician in reduced fees and refunds based on savings generated by having a larger organization and better purchasing power.”

What would the group have done differently to gain more shared savings? “As a physician-established ACO, I think we should have been more aggressive,” explains Lohnes. “We, as physicians, must jump into the marketplace as leaders rather than followers. The systems that succeed will have patient care and physicians as the heart and focus of the organization.”

He explains that if the focus is on the hospital, there may be short-term financial success, but a worst-case scenario for patients who enter the system. For example, notes Lohnes, hospitals will often work to reduce patient length of stay with an eye toward capturing the relevant DRG/HOPPS payment. To counteract this trend, doctors — who often have a higher level of interaction with patients than hospital administrators — must work at establishing relationships with their patients. Within this patient-focused framework, says Lohnes, “actions will more typically be centered on the patient and their needs. Physicians have to advocate for the patient.”

WRG also experienced challenges due to its geographic patient distribution area and the ACO’s managed care model. For the patients attributed to the ACO’s various specialists, roughly 2,800 (or a sixth of the total) had experiences that failed to meet the 33 quality metrics outlined by CMS. “Of those patients who were attributed to the specialty physicians, only 5 percent utilized the services of the primary care physicians who were part of the ACO,” explains Lohnes. “The patients involved may well have met the various criteria for savings, but there was no sharing of that data. Primary care physicians in our ACO had a significant number of patients who also were seen in a competing health network, and sharing of that data with us was not their top priority.”

He adds that, for his organization, specialty physicians were unlikely to gather information on flu shots, mammography services, depression screenings, and other services that are typically associated with primary care practices. “From the specialists’ side of the equation, there was no way to move patients to the primary care practices associated with the ACO without potentially losing a significant portion of their referral bases,” Lohnes remarks.

“After two years, we realized the groups involved would likely incur a significant cost, so we declined the option to continue in the shared-savings program for 2016,” Lohnes says. While increased efficiency results in a built-in reduction, Lohnes notes that groups are not allowed to “save” the same dollar amount year after year. “If you are successful in diminishing ER visits, great,” he explains. “Next year your allocated target amount is less because you were effective. Ultimately, the net effect is to take the low-hanging fruit first, and then work your way down the list of cost centers until there is little left to wring out of the system except the reimbursement per procedure, fewer studies/labs, lower cost, lesser trained providers, etc.”

What worked and didn’t work for this specific ACO arrangement? Lohnes notes one process that worked was the expansion of hours in the primary care practices and better response times from the associated specialist practices. “Rather than a ‘go to the ED and check-and-treat’ process, it helped to have someone who was more familiar with the patient to determine the severity of concern and triage the patient appropriately,” he states. “Radiology also has a potential role in the expansion of practices to include imaging the patient in their home setting (including private homes, nursing homes, and other assisted living facilities) to determine if transport to the hospital may be necessary.”

The ACO’s original goal of developing its own insurance entity also failed to materialize. One reason the ACO didn’t develop into an insurance company is due to state insurance regulations, which require companies to have sufficient financial backing to more than cover their claims. “We made a run at it, but the realities of having to park a fair amount of money for a long time period didn’t work for the people who were initially willing to put up most of the money,” Lohnes says. “We were fully aware of the regulations and the requirements for investment. What we were not capable of overcoming was the inertia that the insurance commission staff was able to interject into the process over what we had been promised by the state insurance commissioner.”

While the ACO didn’t go as planned, one lesson WRG learned from the experience was the importance of continuing to develop strong relationships within and outside the various medical communities they serve. “It’s important to have as many people as possible listening and engaging in conversations within the various medical partners,” Lohnes says. “This includes hospital administrators, payers, and other physicians, as well as the non-medical community. You never know where the impetus for your next potential headache will come from, or where the next potential opportunity may lie.”

Amena Hassan is a freelance writer