A Massachusetts radiology practice uses a three-pronged approach to succeed in a long-standing independent practice association. 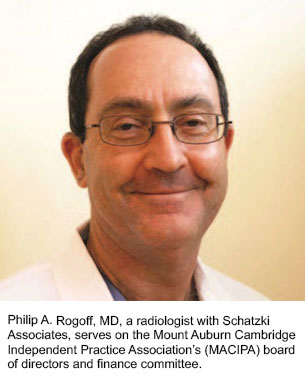 As CMS implements the Quality Payment Program (QPP), more radiology groups may consider joining an independent practice association (IPA), a cooperative of independent physician practices that work together to provide care while still maintaining their autonomy. Radiology groups that participate in IPAs could have an easier time meeting the reporting requirements under the payment program’s two paths: the Merit-Based Incentive Payment System (MIPS) and Alternative Payment Models (APMs).

Groups positioned to join an IPA can learn valuable lessons about how to make it a successful venture from Schatzki Associates, Inc. — a founding member of the Mount Auburn Cambridge Independent Practice Association (MACIPA).

A private practice with 13 radiologists based at Mount Auburn Hospital in Cambridge, Mass., Schatzki Associates partnered with other independent physician groups in the area to establish the MACIPA in 1985, as Healthcare Maintenance Organizations (HMOs) began taking root in Massachusetts. The association now has more than 400 members, including about 100 primary care physicians and 300 specialists with privileges at Mount Auburn Hospital.

“The MACIPA formed primarily to represent member physicians in contract negotiations with HMOs and other insurance companies,” says Philip A. Rogoff, MD, a radiologist with Schatzki Associates. “The association can negotiate better contracts than an independent practice could on its own.”

Schatzki Associates is the only radiology practice in the MACIPA and has been a leader in the organization from the beginning. It has maintained its position as an integral member of the association through three primary actions: engaging in the association’s leadership, collaborating with referring physicians and other providers to improve the quality of care, and investing in the organization to ensure it has the tools necessary to succeed in the evolving health care landscape. These efforts also align with the QPP’s reporting requirements, upon which reimbursements will soon be based.

“We operate as a cohesive unit with the other members of the association, and the trickle-down effect is that our patients receive highly coordinated care,” Rogoff says. Rogoff’s partner, Schatzki Associates president Michael J. Shortsleeve, MD, is also a leader in the MACIPA.

Schatzki Associates’ radiologists carved out their places in the MACIPA’s leadership early on. They joined the board of directors, oversight committee, and other commissions as fully engaged members of the IPA.

Barbara Spivak, MD, president of the MACIPA and internal medicine physician with Mount Auburn Medical Associates, says the radiologists bring a unique perspective to the group, with a comprehensive understanding of care that unifies the association.

“Radiology has a huge impact on how the ship is steered because almost everybody who is sick undergoes imaging, and many of the screenings we do are done through radiology,” Spivak says. “The radiologists are pivotal to making this approach to coordinated care work.”

Serving on the MACIPA’s boards and committees also gives the radiologists a chance to build meaningful relationships with their referring physicians and other care partners. They meet regularly to discuss topics related to how the association functions, including marketplace changes and technology advancements.

“When you sit at the table with people and you talk and work together face-to-face in meetings, you get to know one another,” Rogoff says. “Then, when the time comes to care for patients, there’s a level of trust and understanding that opens the lines of communication that ultimately leads to better care.” 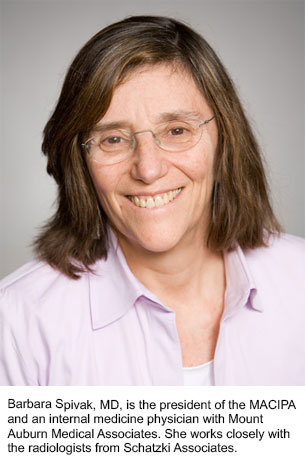 “We have established a level of understanding with our referring physicians. So when I call one of the doctors I’ve been working with for a long time, I know that within 30 seconds I will have that physician on the phone,” Rogoff explains. “If I call someone outside of my network, it’s a very different experience because we don’t have the same kind of relationship.”

“The radiologists teach us to look at problems diagnostically and help us determine the right test to do so we can get the answer quickly without wasting time and resources doing tests that aren’t really necessary or appropriate,” explains Stephen P. Ranere, MD, chairman of MACIPA’s finance committee and internal medicine physician with Belmont Medical Associates. “We trust the radiologists and they trust us, which allows everyone to listen to one another without being defensive.”

This cooperative relationship between the radiologists and referring physicians ensures patients receive the most appropriate imaging care, when they need it. It also reduces unnecessary exams, Rogoff says. “We’ve established a lot of trust and credibility as an integral member of the IPA and have worked diligently over the years to ensure that we are held in high esteem by our colleagues,” he says. “In return, our recommendations tend to be followed instead of ignored, and the net result is that the patients receive better care.”

The radiologists have also gained credibility by investing in the MACIPA. For example, when the association began implementing its electronic health record (EHR) 10 years ago, only IPA members who use the record were expected to pay for it, leaving the radiologists and some other members off the hook financially.

But Rogoff and Shortsleeve objected to this approach and insisted that the cost of the EHR be divided equally among the association’s members — to which the board agreed. “We helped pay for the system because it’s the right thing to do for the IPA,” Rogoff says.

The radiologists are taking the same stance now as the MACIPA prepares to upgrade its EHR. In addition to paying for a portion of the record, the radiologists have agreed to cover a third of the cost to integrate ACR SelectTM, a clinical decision support tool based on the ACR Appropriateness CriteriaTM, into the new system. (Read an Imaging 3.0 case study about ACR Select at http://bit.ly/ACRSelectCase). 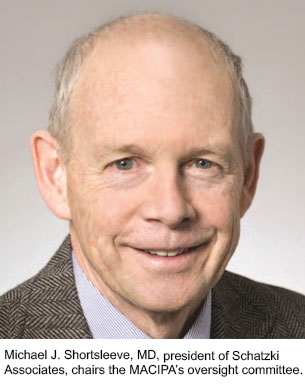 Integrating ACR Select will prepare the IPA for implementation of the Protecting Access to Medicare Act, legislation that will make it mandatory in the near future to consult approved appropriate use criteria for all advanced imaging.

“Even though integrating ACR Select into our EHR won’t benefit us financially, we’re paying some of the cost,” Rogoff says. “This tool will allow us to provide the best and most optimal care for our patients by advancing more appropriate imaging and lowering imaging utilization.”

Spivak applauds the radiologists for bringing the technology to the MACIPA’s attention and paying a portion of its cost. “They’re raising an issue that, if it works, will cut back on their income, but is ultimately better for our patients,” she says. “It speaks to how much of a team player they are and how much they care about the IPA. It’s very laudable on their part.”

Another way the radiologists have invested in the MACIPA is by hosting quality improvement initiatives such as “mammothons” to encourage women to get breast imaging. “A couple of times a year, the IPA gives us a list of patients who are due for their annual mammograms, but who haven’t scheduled their screenings,” Shortsleeve explains. “We call those patients directly and get them scheduled on the IPA’s behalf.”

Ranere says such efforts are invaluable because they help the association reach quality metrics, like those outlined in the QPP. “These efforts really are aimed at the common good and help us achieve our goals as a group rather than as individuals,” he says.

The type of closely coordinated care that the MACIPA provides will become essential as the QPP and other new payment models that encourage physicians to improve quality and reduce costs take effect. One way radiology practices can position themselves to succeed under these new systems is by following Schatzki Associates’ lead in becoming an engaged member of an IPA.

“As we move into MIPS and APMs, the exact requirements that we, as physicians, will be required to meet are a little unclear,” Rogoff says. “The advantage of our position within the IPA should allow us to ensure that our needs with respect to MIPS are addressed by the IPA, to the extent that is possible. In addition, in the advent of our participation in an APM, our position within the IPA should ensure that we receive a fair and appropriate share of income derived via the APM.”