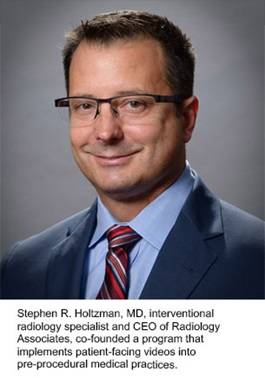 After an MRI revealed a lesion on one of his kidneys, San Luis Obispo County, Calif., resident and attorney John Normanly knew he needed to act quickly. At his urologist’s recommendation, Normanly made an appointment with Stephen R. Holtzman, MD, interventional radiology (IR) specialist and CEO of Radiology Associates, for a tumor ablation.

Normanly went to the hospital on the day of his procedure and was surprised when, in the preparation room, a nurse handed him a tablet computer and asked him to watch a couple of short videos before he discussed the procedure with Holtzman. The first video introduced Holtzman as the treating physician and outlined his training as an IR surgeon, his community service work, and his credentials, while the second video described what would happen during the procedure.

“Before the videos, I didn’t know what I was getting into; I just hoped I would be going home at the end of the day,” Normanly says. “Procedures like this always invoke a fear of the unknown, but the videos relaxed me. I knew who my doctor was and what he was going to do to my body before I even talked with him.”

As demands on physicians have increased, opportunities to connect with patients like Normanly have decreased. To return the focus to building patient relationships, Holtzman founded the Holvan Group and developed a series of patient-facing, customized videos that enhance the patient experience, improve quality of care, decrease physician burnout, and reduce waste.

In 2013, after years of frustration with the way volume-driven demands in medicine had increased physician burnout and decreased interaction with patients, Holtzman decided to make a change. “I really longed for the days when I could spend time getting to know my patients, and I wanted to see if I could bring that back,” he says.

For years before developing his first video, Holtzman used PowerPoint presentations to explain procedures during patient consultations. The presentations took approximately 30 minutes, and despite Holtzman’s best efforts, patients often had dozens of questions.

Holtzman felt as though patients often didn’t fully understand or feel comfortable with the material. Instead of getting to know the patients and soothing their anxieties, Holtzman spent consultations answering basic questions about the procedures (often the same ones over and over), leaving little time to create the interpersonal relationships he desired.

As his dissatisfaction increased, Holtzman attended California Radiological Society meetings and drew inspiration from speakers who emphasized the importance of minimizing hospital waste and returning the focus to patient care. That’s when Holtzman got the idea to adapt his PowerPoint presentations into short, informative videos that described IR procedures in depth, using simple language and images.

Soon thereafter, Holtzman began working with consultants, who were already in his hospital assisting with the implementation of lean management principles, to turn his idea into reality.

Holtzman hoped to reimagine the entire patient care process. “I started thinking about care from the very beginning to the very end of the patient’s experience,” he says. “What are the patients’ biggest anxiety points and biggest frustrations?”

To better understand patients’ pain points, Holtzman interviewed patients, schedulers, receptionists, and nurses. Through these conversations, he identified several “bottlenecks” in the patient care process, many of which occur even before the patient arrives at the hospital. “When the nurse calls you the night before a procedure, he or she tells you a lot of information. If you’re lucky, you might remember 10 percent of it,” Holtzman says. 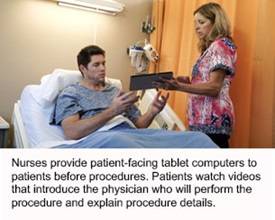 He explains that patients usually remember to leave their valuables at home, for example, but then come to the hospital without identification or health insurance cards. “I thought, ‘Wow, there’s probably a couple hours wasted here every day because of little things like this,’” he says, adding that “every delay pushes every other case back; it’s a domino effect.”

Holtzman also found that one source of patients’ anxiety was not knowing the physicians performing their procedures. To address this, Holtzman created a series of videos, like the one Normanly viewed, that provide brief biographical information about the physicians who work at the hospital. “These videos reach out directly to the patient and eliminate some of the fear of the unknown,” Normanly says.

In addition to physician biographies, Holtzman created videos that discuss the importance of pre-procedural safety practices, such as hydrating only until midnight, and ones providing practical information, including where to park upon arriving at the hospital. Others outline the risks and benefits of the procedure, so patients understand and are able to digest protocols before the consultation takes place.

Since Holtzman began using the videos, he has seen a considerable change in his patients’ attitudes and comfort levels. “Patients who watch the videos arrive with many of their questions answered, so there is more time to get to know them,” Holtzman explains. “After they’ve seen the biographical video, I can say, ‘OK, you know a little bit about me; why don’t you tell me a little about you?’”

At that point, Holtzman says that most patients become immediately more comfortable. They stop looking at the monitors and the table and start talking about their passions. “I had a guy a couple weeks ago who worked on the space shuttle, and I thought that was fascinating. I never would have known that if we had to spend all of our time discussing basic information about the procedure,” he says.

Normanly was so impressed with the videos that he suggested that Holtzman share them with other medical organizations. In early 2017, The Holvan Group began offering its videos to other medical facilities. Holtzman co-founded The Holvan Group with Michael Holliday, a software developer and IT consultant who created a HIPPA-compliant web server that allows patients to access the videos before they even arrive at the hospital.

Across the board, patients have been pleased with the videos. After a nine-month pilot at Sierra Vista Regional Medical Center, 90 percent of surgical patients surveyed experienced overall satisfaction, and 97 percent felt prepared for their procedure after watching the videos and even before speaking with the physician.

According to patient feedback cards, some patients found the videos so helpful that they viewed them multiple times before their procedures, and others named them superior to paper handouts with the same information. “It’s saying to the patient that I care enough about you that I really want you to know what I am doing,” Normanly says.

Not only have the videos reduced patient anxiety and increased patient satisfaction, but they have also significantly reduced physician burnout. Patients now arrive at the hospital with many of their preliminary questions answered, freeing Holtzman to see twice as many patients each day and allowing him to consistently end his work day around 5:30 p.m., instead of 8 p.m. 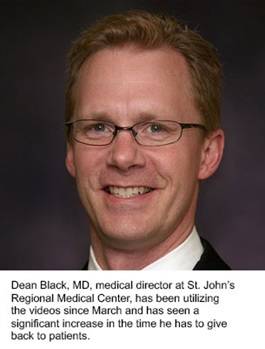 “It’s been a huge help for my family life,” Holtzman says. “I go home happy because I am stimulated by hearing my patients’ stories, and I can tell my patients are happy again.”

Dean Black, MD, medical director at St. John’s Regional Medical Center, who has been piloting Holtzman’s videos since March of this year, also has positive feedback. “It’s freed me up to focus more on patient satisfaction by more effectively alleviating their fears. When I see patients, they have already seen a well-designed video that tells them what the procedure will entail. We can immediately start building trust that is so crucial in the patient-doctor relationship,” Black says.

Hamed Aryafar, MD, interventional radiologist and associate clinical professor at the University of California San Diego, has also been utilizing the videos in clinical and procedural settings. “I think they are hugely important in patient education and satisfaction,” Aryafar says. “I can see the dramatic difference it makes in the patient’s understanding of the procedures.”

Holtzman is also hopeful that the videos will help implement lean management and Triple Aim principles, which focus on improving patient care and population health, while minimizing systemic waste and reducing cost. As redundant tasks are automated and workloads are streamlined, physicians may work more efficiently and effectively.

“These videos set the standard for patient care in the hospital,” says Kim Brown Sims, vice president of patient care services for Queen of the Valley Medical Center, who helped implement the videos during the pilot at Sierra Vista Regional Medical Center. “They set the bar for the staff because they tell the patient what to expect. If the patient doesn’t receive that care or something promised isn’t done, he will ask. It’s a single technology that has the potential to raise your staff and patient satisfaction as well as your surgical outcomes, all of which benefit hospital ratings and help patients take control of their health.”

Holtzman’s video library now includes more than 150 videos, with over 60 focusing on radiological procedures for both diagnostic and IR topics (along with others that discuss patient safety, medication, and procedure preparation). All of the videos have been translated into Spanish by a certified medical translator.

“Doctors have dreamed of something like this for years. Our patients deserve the highest quality care; these videos propel us toward that objective,” Black says.

Holtzman is hopeful that his videos will extend beyond radiology to all fields of medicine, and he encourages others to look for ways to address problems they see in the health care community. “We can bury our heads in the sand and just say, ‘I’m too busy,’ but I think physicians should take a leadership role and think about how we can make it easier on the patient,” he says. “Invest a little time every day. Try to inspire a couple of people to do the same, and you will see profound results.”

Watch and Learn by American College of Radiology is licensed under a Creative Commons Attribution-NonCommercial-NoDerivatives 4.0 International License. Based on a work at www.acr.org/imaging3. Permissions beyond the scope of this license may be available at www.acr.org/Legal.

Chelsea Krieg is a freelance writer