Radiologists at Massachusetts General Hospital use virtual consults to review findings with patients and PCPs.
Get a PDF version of this Case Study
Download 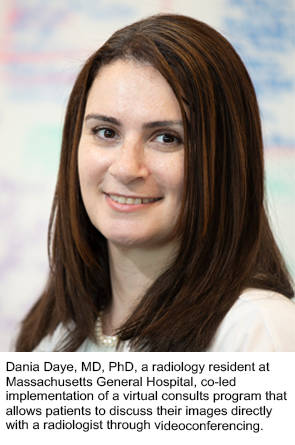 A primary care physician (PCP) at Massachusetts General Hospital (MGH), Susan E. Bennett, MD, dreaded those moments: She would sit to review an imaging study with a patient and point out some type of abnormality — a lung nodule, perhaps, or a small amount of emphysema on an older smoker’s lungs. Then she would do her best to explain the results and reassure the patient that an abnormality was not always as bad as it might seem.

But the imagination runs wild. And in those instances, Bennett would often see an all-too-familiar look in the patient’s eyes. “I’d see a look that conveyed fear and confusion,” Bennett says. “I struggled to find the language to explain what an incidental finding means. Patients were hearing about findings that seemed scary, and I was unable to reassure them. PCPs don’t have the training to point out subtle abnormalities on imaging studies or explain the differential diagnoses of incidental findings.”

The solution: In early 2016, MGH embarked on a virtual radiology consultation pilot program that would allow patients to discuss their results directly with the doctor who knows imaging best — the radiologist. By early 2017, the pilot — which involved two radiologists, three PCPS, and 10 patients — was expanded to include five radiologists and more than 50 patients. So far, the program has had a positive impact, with 90 percent of patients saying that the consultations markedly improved their healthcare experience. And the radiologists are benefiting, too.

“Radiologists have an image problem — few avenues exist for radiologists to talk to patients, and very few patients know their radiologist. An image is worth a thousand words, but that doesn’t matter if we don’t explain the findings,” says Dania Daye, MD, PhD, a radiology resident at MGH. “Programs like this change how patients and other physicians perceive us. This is a great opportunity for radiologists to contribute more directly to patient health and to increase our own value by becoming more involved with patients.”

The virtual consults program has roots in a 2012 initiative that started when a woman with cancer asked her radiologist to see her imaging so she could better understand how her treatment was working. That encounter led a team of MGH radiologists to establish a clinic in which they conducted in-person consultations with patients during limited hours. (Learn more in this Imaging 3.0 case study.)

Patients responded favorably to the in-person consultations — they started following their doctors’ advice more regularly and sticking to care regimens more often. But the in-person consults were held at MGH only once a week, so in early 2016, Daye and a colleague brainstormed ideas to give more patients direct access to their radiologists.

They came up with the concept of virtual consultations and pitched it to radiology department leaders, who saw the potential benefits and greenlighted a pilot program. “As we thought about scaling our results delivery program, we decided that the virtual consults would provide an efficient way to broaden our reach without disrupting our workflow,” says Daye, noting that the in-person clinic also remains in operation. 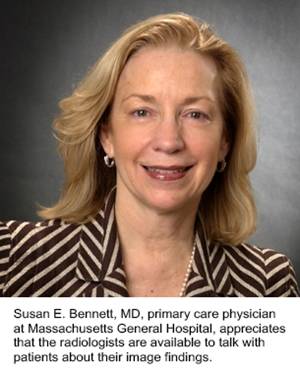 To start, Daye and her team selected a couple of radiologists who already embraced the idea of direct communication with patients to take part in the pilot. Daye notes that no radiologists had to be convinced of the concept’s merits. Indeed, she says, “During the initial pilot, we were approached by many other radiologists who had heard about it and were interested in participating.”

While MGH’s radiologists were eager to join the project, some worried about the amount of time the virtual consults would take. These concerns were quickly dispelled, however, when they realized that the average virtual consultation lasts fewer than 7 minutes.

“I was particularly sensitive about making sure this program would not interfere with our other duties, so we kept it simple, and we’re instituting it incrementally,” says Dushyant V. Sahani, MD, director of computed tomography at MGH and associate professor of radiology at Harvard University. “As we do more of these consults, we expect them to just blend into our normal workflow.”

The radiologists then partnered with three PCPs, who began recruiting patients for the project. The PCPs asked patients during their regularly scheduled appointments if they would be interested in the virtual consults, providing them with an informational brochure that MGH developed. Ten patients participated in the initial pilot.

Each consult unfolds the same way: When a patient opts for a consult, the PCP calls a radiologist in the same specialty and says that the patient would like to speak with him or her. The radiologist then uses videoconferencing in the reading room or any other place with an accessible computer and a camera to appear virtually in the patient’s exam room.

On the patient’s end, the consults are conducted on an iPad, the first of which was purchased with money from a small grant that Daye secured from MGH’s Center of Expertise in Quality and Safety. The rest were purchased with a grant the team secured from the ACR. The iPads feature split screens that show the images on one half and the radiologist on the other, or the radiologist in a smaller window on the bottom left and the patient’s images on the rest of the screen. The setup allows the radiologists to review the images and findings directly with patients and their PCPs.

The goal is to educate patients about their findings, motivating them to make healthy lifestyle changes and to follow their doctors’ orders. The thinking, Bennett says, is that when patients see their clogged arteries, they will get more serious about losing weight, and when they see their damaged lungs, they will be more inclined to quit smoking. “As radiologists, we don’t always factor in how much we need to share information with patients and how interested they are in their care,” Sahani says. “It is remarkable how engaged patients become when you actually discuss their bodies with them. Empowering them with this knowledge is in their best interest. It’s their data, after all.”

Survey results show that patients in the initial pilot found value in the virtual consults, which they said helped them better understand their care. Based on this positive response, the hospital secured an ACR Innovation Fund Grant in January of 2017 to expand the pilot program to five radiologists and more than 50 patients. Daye wrote the grant proposal with input from Bennett and Sahani. “The objective was to assess the value of virtual consultations with primary care providers and patients as a new means of optimizing patient-centered care in radiology,” Daye says. 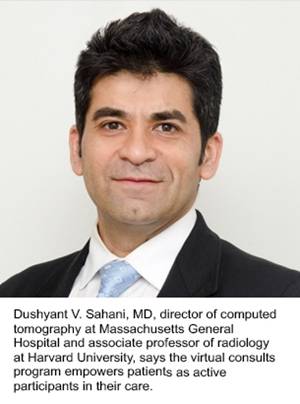 During this expanded pilot, the PCPs found that patients were following doctors’ orders better than patients who were not involved in the virtual consults. “Patients told us that they understood their medical conditions a lot better after interacting with the radiologists, asking questions, and seeing firsthand what the insides of their bodies look like,” Daye says. “As a result, they were more apt to take actions, such as losing weight, to improve their health.”

According to surveys, 90 percent of patients in the expanded pilot were “very satisfied” with the virtual consult experience. They found listening to the PCP and radiologist discussing their care particularly beneficial. “The consults give patients insight into how we think and how we make decisions, which is important because things are not black and white in medicine,” Bennett explains. “The more information patients have about what’s going on with their health, the better.”

The radiologists intend to track these patients to study the program’s lasting impact. “In the expanded pilot, we are demonstrating the overall value of the framework,” Daye says. “Next, we intend to conduct long-term patient follow-up to look at patient outcomes in specific diseases.”

Looking to the Future

For Bennett and other PCPs, the program helps drive higher quality care. “Now, when a patient has a finding on an imaging exam, I no longer have to stumble through, trying to explain what the finding means,” Bennett says. “I know I can loop in the radiologist to provide a detailed explanation of the finding, and then the patient and I can work together to determine the next steps in their care.”

MGH’s radiologists have also responded favorably to the program. By interacting with patients, even in this virtual way, the radiologists are no longer regarded as ambiguous figures who sit in dark rooms all day examining images. Instead, they are viewed as they should be: as key members of the care team focused on improving patient health.

The results of the pilot have been so positive that MGH’s radiologists have adopted the virtual consultations as a permanent initiative, adding more PCPs and extending the program to include surgical specialties, such as urology. They also envision developing a template that other radiologists could follow to implement similar virtual consults at their own institutions, and they hope to eventually collaborate with other radiologists to test the program at institutions nationwide. Daye says that such consults could be particularly beneficial in rural areas where patients and their radiologists are often separated by hundreds of miles.

Sahani says that efforts like this are critical to advancing high-quality care. “When we talk to patients, radiologists can make a tremendous contribution to their care by giving them a better understanding of their conditions, diagnoses, and treatments,” he says. “And the bonus is that we can see the difference we are making directly with the patient and the PCP. We don’t always get that kind of feedback. This is a fantastic model for the future.”

To learn more about delivering results directly to patients, check out these articles:

With the help of technologists, radiologists in Colorado are taking a more active role in patient care through an immediate results delivery program.

Radiologists get a lesson in conveying empathy to patients.

Virtually Connected by American College of Radiology is licensed under a Creative Commons Attribution-NonCommercial-NoDerivatives 4.0 International License. Based on a work at www.acr.org/imaging3. Permissions beyond the scope of this license may be available at www.acr.org/Legal .  

Chris Togneri is a freelance writer