Imaging professionals in Pakistan are helping their youngest cancer patients overcome fear and anxiety in the imaging room.
Get a PDF version of this Case Study
Download 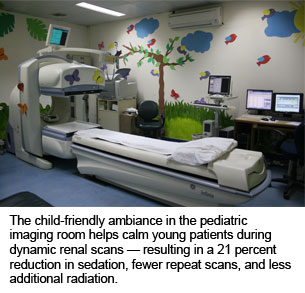 Helping young patients cope with the unease when it comes to renal scans in the imaging room became a chief concern for the department of nuclear medicine at Shaukat Khanum Memorial Cancer Hospital and Research Center in Lahore, Pakistan. The imaging team knew it had to do something to decrease their pediatric patients’ anxiety during dynamic renal scans, where young patients have to lie completely still on an imaging bed. Body movements can cause motion blur in the images, and ultimately lead to repeat scans that expose patients to additional radiation.

“The project took two months to implement,” explains Amjad Rashid, manager of the department of nuclear medicine at Shaukat Khanum Hospital. “At the time, we were facing a major issue, where a lot of pediatric patients were undergoing sedation, and we had a very long waiting list in our anesthesia department. A lot of patients were suffering from extended delays.”

Rashid got the idea to update his imaging department after visiting the United Kingdom for a fellowship at the Royal Marsden Hospital, the first hospital in the world dedicated to treating cancer patients. “When I entered the gamma camera room in the imaging section of the Royal Marsden Hospital, I was very surprised to see all the walls painted with child-friendly themes and pictures of animals, even on the machines,” he recalls. “This was a new concept for me, since it wasn’t really practiced in my country or at my hospital.”

Upon his return to Shaukat Khanum Hospital, Rashid decided, along with his colleagues, that it was time to make their imaging room a friendlier place for pediatric patients. Although he faced a few concerns from hospital administrators beforehand — such as ensuring the safety of patients, staff, and equipment while the changes were being made by outside volunteers — the hospital agreed to implement the project in 2014.

“Ultimately, we wanted to create a home-like environment for our pediatric patients, where they could feel much more comfortable and involved,” Rashid says. Other colleagues who helped make the project a reality were Bushra Awan, a play therapist at Shaukat Khanum Hospital; Humayun Bashir, MBBS, FRCP; Haseeb Ahmed, MD, FCPS; Khalid Nawaz, MBBS, KBNM, FCPS; and Haris Ali, the department secretary.

The hospital’s department of nuclear medicine had the objective to achieve optimal imaging while minimizing the use of sedation for the benefit of the patients and also to save the hospital time and resources. Bashir, who is a nuclear medicine physician and head of the department, immediately supported the project. He understood the benefits of the initiative thanks to his own experience working overseas at two children’s hospitals: Great Ormond Street Hospital in London, United Kingdom, and St. Jude Hospital in Memphis, Tenn.

Ninety to 95 percent of the pediatric patients who visit Shaukat Khanum Hospital are cancer patients who come in for procedures to diagnose neuroblastomas, Hodgkin’s lymphoma, and bone and tissue sarcomas. “In nuclear medicine imaging, you need the patient to lie still for the scans, which generally take up to 25 to 30 minutes,” states Bashir. “Young children, especially between the ages of 3 and 6, don’t totally understand what you’re telling them about the procedures and are also more likely to be apprehensive. When we played cartoons, we found that children became more comfortable with the imaging room and less distracted by the scanning equipment.” 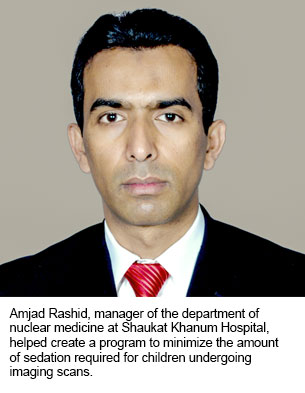 The department’s newest scanner has a built-in viewing screen. Once the protocol is set, the technicians can get these screens close to the patient on the imaging bed, and the patient can watch an animation or other soothing visuals while technicians perform the scan. This calms the patient so they lie still, thus eliminating the need for sedation.

“Anesthesia is a procedure with its own hazards,” explains Bashir. “Before children are sedated, they must fast for a certain length of time so they can be given the sedatives without risk of complications. After sedation, children must be put into a recovery room until they come out of the anesthesia completely. If you can get a child to go through a scan for 30 minutes without sedation, it’s helpful to the child, more convenient for staff, and saves time and effort overall.”

Room with a View

Rashid asked his marketing department to connect the imaging department with volunteers who could paint each wall in the pediatric imaging room. Art teachers and students from various private schools around Lahore offered to create artwork for the department. What’s more, Rashid and his team lined up sessions to teach the technologists to be funny and pleasant to the children. The department also collected donated toys that the technologists could use to help put the kids at ease. “Kids feel less anxious in a colorful imaging room and are excited to see toys,” Rashid comments. “The satisfaction and pleasure on the faces of these sick pediatric patients is the ultimate outcome of this initiative.”

To share the results of the experience, Rashid presented a paper at the International Hospital Federation’s 39th World Hospital Congress in Chicago. The initiative also earned a 2015 Patient Centric Imaging Award  (PCIA) from Health Imaging. “Many cancer patients have to be imaged multiple times during treatment,” Rashid states. “A few of the patients and their parents or attendants who come in for follow-up imaging are really impressed by our initiative to avoid sedation. What means the most to me is the acknowledgment from the patients and the parents — much more than the acknowledgment that came from my poster presentation at the conference, from the PCIA award, or from the hospital.”

Rashid and Bashir both offer advice for colleagues who are interested in creating a more child-friendly ambiance within their hospitals or practices. “They should think out of the box,” Rashid advises. “We can all do things differently, and working in a hospital setting, our first and utmost goal should be to make the patient happy and avoid problems that can easily be fixed.”

Bashir says that the initiative of a child-friendly imaging room is particularly important for a tertiary care hospital like his, where children make up only one-third of the patient population. “Hospitals can have waiting areas with toys to play with for children, but an attractive environment in the camera room is a step further,” Bashir notes. “Most departments in the U.S. will be multi-camera departments, so they can always think about dedicating one particular camera room to be child friendly, painted in a lively theme with TV screens that can show cartoons and animation. The concept is not novel at all, but it’s something that more institutions need to adopt.”