Survey demonstrates positive impact of direct patient consultation with radiologists.
Get a PDF version of this Case Study
Download 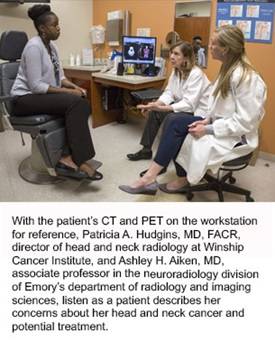 In the past, neuroradiologists and ear, nose, and throat (ENT) surgeons at Emory University School of Medicine’s Winship Cancer Institute in Atlanta worked together to manage head and neck (H&N) cancer in patients exclusively during tumor board meetings.

As their role in patient care increased, Patricia A. Hudgins, MD, FACR, director of H&N radiology at Winship Cancer Institute, believed neuroradiologists’ direct consultation with patients was the next logical step to optimize care that was often complicated, emotional, and life-saving.

But Hudgins and Ashley H. Aiken, MD, associate professor in the neuroradiology division of Emory’s Department of Radiology and Imaging Sciences, wondered if cancer patients understood how this “new” team member fit in? In March of 2016, they decided to find out when they measured patients’ perceptions about radiology consultation.

Patients who were undergoing surgery and additional treatments that included contrast-enhanced CTs (CECT) combined with PET/CECTs were informed by their H&N surgeons that they’d consult directly with the radiologist to discuss their images.

Twenty-seven of those ENT clinic patients were then asked to complete a seven-question survey about their understanding of the radiologist’s role in their care before consultation. After meeting with the radiologist about their post-treatment scans, the patients were given the same set of questions — along with two additional ones that focused on their understanding of radiology and whether they wanted a radiologist to convey their imaging results. 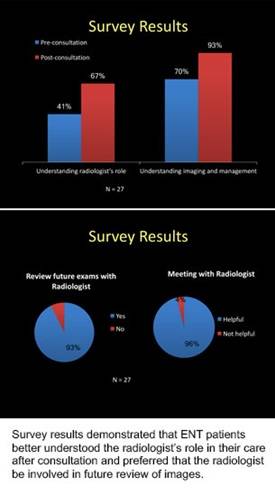 “The survey data speaks for itself, but the patients’ sense of comfort by meeting with their image interpreter was palpable,” says Aiken. “Many of these patients had never seen an image of their primary tumor before surgery. With better understanding, we left these patients more informed about surveillance and their own disease.”

Learn more about how neuroradiologists and ENT surgeons optimized clinic space to consult on cases and directly connect radiologists to head and neck cancer patients in this Imaging 3.0 case study.