A multidisciplinary team invites patients and their families to a weekly thoracic oncology clinic at Elkhart General Hospital.
Get a PDF version of this Case Study
Download 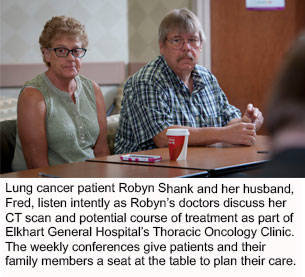 As retired nurse Robyn Shank searched for the right place to begin her lung cancer treatment journey, she selected a place based on the experience of someone close to her.

"When a close acquaintance was diagnosed with cancer, her community hospital in Tennessee had a tumor board where physicians reviewed patients' cases, and the patients were involved in the process," Shank says. "I wanted that same level of involvement in my cancer treatment program."

Shank and her husband make the 45-minute drive from their home in Sturgis, Mich., to the hospital in Elkhart, Ind., to attend the conferences. Patients typically attend an initial conference immediately following their lung cancer diagnosis. Upon completion of their treatment plan, patients attend a second session, during which they see a comparison of their CT scans before and after treatment.

Most importantly, the patient is there with a family member, sitting at the head of a u-shaped conference table. This aspect of the program is so well-received that organizers had to limit the number of family members attending the conferences.

“With lung cancer management, patients are at the center,” says Samir B. Patel, MD, founder and director of the value management program at Radiology, Inc., in Mishawaka, Ind. Including families in these conferences improves the patient experience, he says.

“No patient comes alone,” Patel continues. “Lung cancer is a life-altering disease and, with that, patients want to have as many supporters with them as possible. It improves the experience for the patients to have family members with them, not only for support but also to listen and ask questions.”

Patel is also a member of the Elkhart General Hospital’s board of directors. He and the interventional and diagnostic radiologists of Radiology, Inc., helped establish the thoracic oncology conference at a time when the community was facing a significant public health issue.

According to the Centers for Disease Control and Prevention, Elkhart County, an area known for its recreational vehicle manufacturing industry, has a high percentage of smokers, compared to the rest of Indiana. In response, Elkhart General’s cancer committee, along with senior-level executives and administrative personnel, initiated efforts to address this crisis. 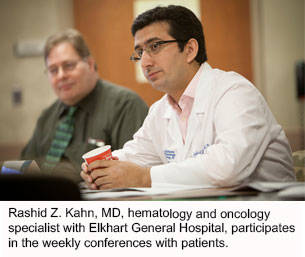 The cardiothoracic surgeons and radiologists teamed up to give multiple presentations to the hospital’s senior leadership, presenting a vision for what would eventually become the thoracic oncology conference. The cardiologists were seeing patients who had heart disease, but many of their patients had similar risk factors for lung cancer. At the program’s onset, the cardiologists were the greatest advocates for lung cancer screening.

With the introduction of low-dose CT technology, which reached Elkhart in 2012, the hospital felt comfortable launching the thoracic oncology conference. Low-dose CT was a safe way to address the community health crisis involving heavy smokers.

“We had to weigh the risks of radiation dose versus the benefits of CT lung screening,” says Albert W. Cho, MD, vice chairman of radiology at Elkhart, who was also involved in the creation of the lung screening program. “We didn’t want to expose patients to high doses of radiation for a screening exam. There needed to be a balance. The low-dose technology provided that.”

Leading the day-to-day operations at the clinic is Jackie S. Lenfestey, MSN, FNP, APRN-BC, and the program’s point of contact for both physicians and patients. Within five days of a patient’s CT scan, Lenfestey calls the patient to discuss the results and next steps.

“I tell patients that the goal of the clinic is to pull together all the doctors and hospital personnel working on their case, to agree on the stage of their cancer and to give the patient the best options for their treatment,” she says. “Throughout the process, we keep the patient at the forefront of care.”

Lenfestey also answers patients’ questions. “The most frequent question I get is, ‘Is it ok to ask questions?’” she says. “Patients are surprised that they, along with their family, can actively participate in the dialogue between the specialists and safely ask questions to better understand their cancer and options for management.” 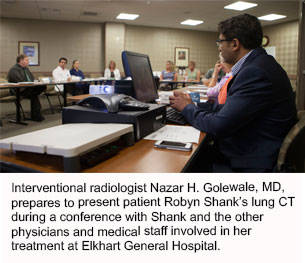 One of the clinic’s participating doctors, interventional radiologist Nazar H. Golewale, MD, receives a list of cases in advance of each weekly conference. During the conference, he posts the patient’s images on a large screen and uses layman’s terms to explain the anatomy. “In many cases, patients have never seen CT scans before attending one of the conferences,” Golewale says. “You can talk about cancer and what it does to the body, but you really get a feel for it when you see the scans.”

Shank doesn’t shy away from the details of her disease and, in fact, relishes being closely involved in her treatment process. “Once doctors reviewed the CT scans with us, explaining everything we saw on the screen, we came up with a treatment plan,” she says. “The doctors explained what the treatment would entail and, when they were done, asked if that was still the course I wanted to take. They took as much time as I needed to explain everything.”

A cohesive staff is imperative to developing a multidisciplinary program like this. Organizing such a group can be challenging, though, as some physicians are employed by a hospital or multispecialty group, and other physicians work on contract. Such is the case at Elkhart, which contracts with Radiology, Inc., for its radiology services. The synergy between the interventional and diagnostic radiologists of Radiology, Inc., and their collaborative partnership with physicians in other specialties, is key to the success of the thoracic oncology program.

“We’re fortunate with our scenario, in that we take a collegial approach to problem-solving even though we come from different disciplines and are not employed by the hospital,” Cho says. “We discuss together what we need and how to get something done. It’s a win-win for us and the patients. And the hospital is addressing a health crisis in the community.”

As of January of 2016, 443 unique patients have been imaged through the lung cancer screening program, and 14 lung cancers were diagnosed as a result. All but one of these diagnoses included completed staging information, such as the extent of the patient’s cancer, the tumor size, and whether or not the disease had spread to lymph nodes or other organs in the body. All 14 patients went on to participate in the thoracic oncology conference. 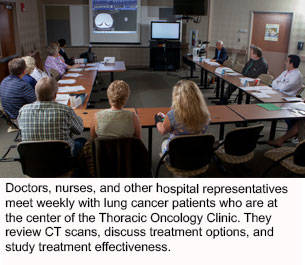 The success of the lung cancer screening program and the thoracic oncology conference spreads mostly through a grassroots, word-of-mouth campaign.

“I get phone calls from people who live an hour to an hour and a half away,” Lenfestey says. “I talked to someone who heard about our program from someone at their church. People who have been diagnosed with lung cancer are hearing about our program through the community, and they want to come to Elkhart for their treatment, and to be a part of the program.”

Cho is encouraged to see patients interested and involved in their own care, instead of being passive recipients of it from their doctors. When the Lung Cancer Screening Program started at Elkhart General, it was important to allow patients to self-refer into the program. Because cost could be a barrier for some patients, program organizers sought and received a grant from Elkhart General Hospital’s foundation to cover the cost of scans for low-income individuals.

Involvement in the thoracic oncology conference not only helps patients learn more about their disease and treatment plan, but also gives them a place where they feel they can openly discuss their condition, sharing their fears and concerns. Lung cancer patients are often hesitant to discuss their disease, more so than patients with other forms of cancer, Lenfestey says. There’s a certain stigma associated with the disease, with patients often feeling like this is something they brought on themselves through lifestyle choices.

For Shank, however, talking about her disease was a no-brainer. "My mother was a school teacher, so I think it's up to me to teach everyone how good a program like this can be," she says.

Focus on the Patient by American College of Radiology is licensed under a Creative Commons Attribu-tion-NonCommercial-NoDerivatives 4.0 International License. Based on a work at www.acr.org/imaging3 . Permissions beyond the scope of this license may be available at www.acr.org/Legal.

Kathy Knaub-Hardy is a freelance writer