Party for a Cause

Northwest Community Hospital’s breast center creatively promotes screening mammography.
Get a PDF version of this Case Study
Download
As the executive director of GI and Breast Services at Northwest Community Hospital in Arlington Heights, Ill., Kathy Quinlan, MBA, knows that all women over 40 need a mammogram. However, about 50 percent of those women aren’t getting screened. “They don’t think they need it,” says Quinlan. “Or they’re scared. Or somebody said it hurts. Or they’re afraid of bad results.”

But then it dawned on Quinlan: Why not throw a party? “I wanted to make mammography a nice experience, a fun experience,” she says. The resulting “Party for Your Pair” events have been a huge success. The parties have allowed several dozen women to get their first mammograms, while also providing important opportunities for radiology education and improving the specialty’s perception among the public — in support of the ACR’s Imaging 3.0™ campaign. 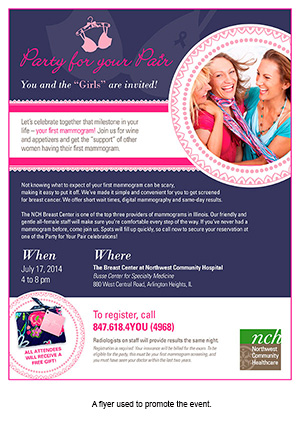 In planning the first “Party for your Pair,” which took place on April 10, 2014, Quinlan turned to Northwest Community’s marketing department for assistance. “One of the things they did was create a nice postcard,” Quinlan says, which was distributed to primary care doctors and other specialists. The marketing department also helped by creating posters set up in every female restroom stall throughout the hospital. They also used social media to market the event on both Twitter and Facebook as well as on the practice website.

Initially, there still wasn’t a lot of sign-up activity. So the marketing department pulled electronic data for the hospital’s female patients over 40 who were not on record as having had a mammogram and sent a direct mailing to those individual patients, with much greater success. Women were directed to pre-register at a specific number, because they had to meet specific criteria — in addition to being over 40 — for insurance to cover their mammogram. To meet the hospital’s criteria, the women also needed to have seen a primary care physician in the past two years, so there would be a place to send the results. Quinlan and other staff held three planning meetings where they went over details for the party and made sure everything would go off seamlessly.

The inaugural event was attended by 27 women. One woman was 47 and another was 49; neither had ever had a mammogram before. “They said they would never have done it if it weren’t for this event,” says Quinlan. “They needed a little nudge to make it a pleasant experience. Now they know it’s not so bad.”

The event’s success, explains Quinlan, followed from her overall approach: design it to be tasteful and with “lovely finishing touches” from the marketing department. The event included temporary pink ribbon tattoos, and all attendees were given a nice plush white robe to wear, just like at a spa. They also gave out little Vera Bradley change purses. There was wine and plenty of cold and warm appetizers.

Quinlan says they worked with Allan Malmed, MD, director of the breast center at Northwest Community Hospital, who attended the event and was very supportive. Each patient was guided through the process by nurse navigators, and there were various educational activities, including those run by medical equipment vendor GE, who partnered with Northwest Community Healthcare to help fund the event. The company, who was “wowed by the idea,” says Quinlan, provided educational materials on automated breast ultrasound.

The overall atmosphere was meant to make women feel at ease. “I felt like a proud mom,” says Quinlan. “I love that it got such great reviews and that women were seeking me out to give me a hug.” The second party occurred on July 17, 2014, with 24 attendees. The hospital plans to continue running this event three times a year from now on. 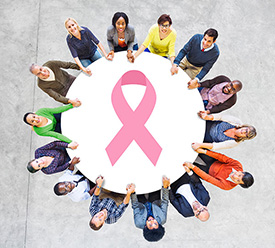 One unique and important aspect of the party is that women were given their mammography results immediately. Northwest Community Healthcare’s breast center has a program called “Results by Request,” which began 10 years ago and allows women scheduling mammograms to opt to receive their results directly after they are screened. Malmed explains that the practice has technology that flags mammograms that need to be read right away. This helps decrease the anxiety of women waiting for results.

“If the mammogram is abnormal, we proceed with a workup right away — magnification, ultrasound, biopsy,” explains Malmed. Often, if the results are normal, they’re shared with the patient by a nurse practitioner or nurse navigator. At the “Party for Your Pair” in April, two women had findings that needed subsequent testing — luckily, both ended up being negative, and no surgery was necessary.

Malmed says that the event also helped clarify for new patients what they can expect in their breast center. “This is one way to knock down a barrier, to put a human face to the radiologist and to provide the first experience of mammography in a pleasant way. It was really a fun evening,” he says. Quinlan agrees about the event’s important message: “We can help get patients over that first hurdle. We know many women dread breast health care, but we can partner with women and help them have a great experience. Then they’ll tell two friends, who tell two friends, and mammography will continue to grow. The ultimate goal really was to get women to understand the importance of screening mammograms and staying on top of their health.”