Focus on the Patient 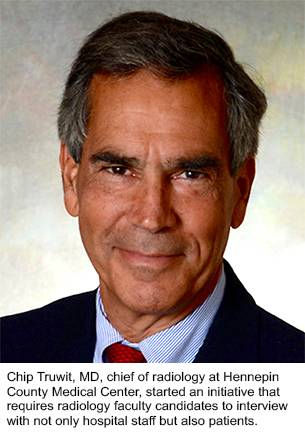 Doctors hoping to work at Hennepin County Medical Center (HCMC) under the direction of Chip Truwit, MD, FACR, chief of radiology, quickly learn that he and his team are serious about providing patient-centered care.

So serious, in fact, that Truwit took the unusual step of requiring radiology faculty candidates to interview with one or more patients.

“We need our radiologists to understand that while much of radiology is performed in dark rooms, for us, a big part of the job includes one-on-one time with patients, explaining procedures and results any time a patient requests to speak with one of us,” Truwit says. “Involving patients in the interview process sets the tone and makes it clear that we don’t just talk about patient-centered care, we deliver it.”

Truwit conceived of the initiative after attending a local patient experience conference. He says he had an “awakening” when he realized that many radiologists, himself included, “had lost sight of the core things we need to be doing, such as focusing on the patient and remembering why we became doctors.”

With a renewed commitment to patient-centered care, Truwit approached Sheila Delaney Moroney, director of patient experience services at Hennepin, about the patient interviews. He suggested recruiting medical center staff members who are or have been patients to conduct the interviews. Moroney loved the unorthodox idea and agreed to help develop the program.

“It immediately sends a signal to the candidate that interacting with patients and partnering with them to co-produce their care is paramount to us,” Moroney says. “It sends the message that we care about this, and if you don’t feel the same way, this isn’t the place for you.” 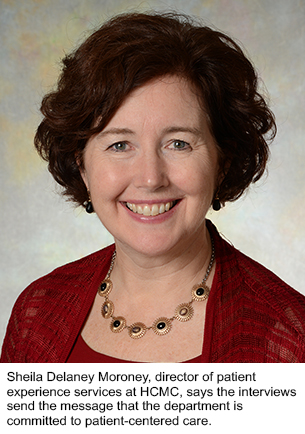 Truwit and Moroney have since developed a roster of patients who have undergone procedures at Hennepin and are available to interview candidates, as needed.

They give the patients a suggested list of questions, but the patients are free to stray from the script. Interviewers focus on how doctors engage family and caregivers, how they work in a team environment, and how they ensure patients understand every aspect of their care.

One such patient interviewer is Marianne Knutson, who has a chronic condition that causes her body to produce excess spinal cord fluid. As someone who has had 28 spinal taps, eight brain surgeries, and two brain infections, Knutson asks doctors how they would care for a “frequent-flyer” patient like her.

“If they can’t answer, that’s a flag,” Knutson says. “To get a well-rounded radiologist and employee, you need someone who can take care of patients and ease their fears. If you don’t, often the patient won’t follow the treatment because they won’t understand it. Being able to communicate with patients and families makes a huge difference.”

Following the interview, Truwit and his hiring team meet with the patient to discuss his or her impressions, which inform the hiring process.

Truwit says the approach surprises some candidates, most of whom appreciate the experience. “We usually receive positive feedback, both from the patients and the candidates,” he says. “Some potential candidates say, ‘Holy smokes, I have a lot to learn!’”

David Swanson, MD, an interventional radiologist at HCMC, was one of the first doctors to interview with a patient. “At first, it was a little startling to have a patient asking questions, but after a few minutes, the interview felt very comfortable,” he says. “It certainly helps radiologists improve their bedside manner, which, frankly, we have not always focused on in our training.”

This is critical because meeting with patients is an expected part of the job at Hennepin, where all of the radiologists engage with patients, Truwit says.

Since instituting this approach about five years ago, Truwit has shared his patient interview process with Hennepin’s other departments and leadership, and at least one committee has followed his lead to include patients in its interview process.

In addition to the interviews, patients sit on advisory panels and attend board meetings at Hennepin. These efforts are all part of a strategy to ensure that staff is listening to the most important people in the hospital — the patients.

“Anyone who’s going to work here must understand that patients are our number one priority,” Truwit says. “We’re on a journey with them, and we need to make their experience as favorable as possible.”

Focus on the Patient by American College of Radiology is licensed under a Creative Commons Attribu-tion-NonCommercial-NoDerivatives 4.0 International License. Based on a work at www.acr.org/imaging3. Permissions beyond the scope of this license may be available at www.acr.org/Legal.

Chris Togneri is a freelance writer