The Children’s Hospital of Georgia collaborated with patients to redesign its pediatric imaging suite and improve the patient experience.
Get a PDF version of this Case Study
Download
View the related video. 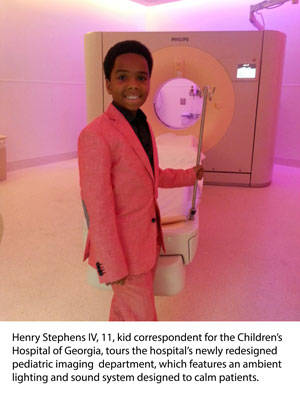 Augusta, Ga., resident Angalita Stephens remembers the first time she took her son, Henry Stephens IV, to the Children’s Hospital of Georgia’s pediatric imaging suite. Henry was 8 months old at the time and needed an MRI because he had craniosynostosis — a condition where the sutures in a baby’s skull fuse together too soon, inhibiting brain growth. Angalita recalls feeling nervous and intimidated when she walked into the imaging suite, with its uninviting stainless steel equipment and sparsely decorated walls. “Everything was sterile, and everything was serious,” she says. But that was more than a decade ago. All of that has since changed with a recently completed redesign of the pediatric imaging suite.

The renovation transformed the pediatric imaging department into a playful space that immediately puts patients and their families at ease. Developed in consultation with patients and families, the redesigned department includes an interactive video wall that engages patients and their siblings in the “waiting lounge,” a pretend CT scanner that teaches patients and parents about their exams, and an ambient lighting and sound system that soothes patients during their scans. “The new pediatric radiology department is so colorful and vibrant that it doesn’t really seem like a hospital at all; it seems more like a fun little arcade,” says Henry, who is now 11 years old and the first official kid correspondent for the Children’s Hospital of Georgia . “Kids actually look forward to having their procedures done there.”

The Children’s Hospital of Georgia, which is part of Augusta University and AU Health, redesigned its pediatric imaging suite in coordination with the system’s long-standing commitment to patient- and family-centered care. The health system earned a 2015 Patient-Centric Imaging Award  from Health Imaging for the project. Kristopher N. Lewis, MD, assistant professor of radiology at Augusta University and section chief for pediatric radiology at the Children’s Hospital of Georgia, says that improving the patient experience benefits patients and leads to better imaging quality. “The patient is happier and more comfortable, and as a result, we’re able to reduce the radiation dose and get better quality imaging overall,” he says.

The department worked with Augusta-based 2KM Architects and a consulting team from Philips Healthcare, which has several products aimed at improving the patient experience, to redesign the imaging suite and upgrade its imaging equipment. “We really engaged our design team in the process,” explains Layne Mitchell, administrator of the Department of Radiology and Imaging for Augusta University and AU Health. “We got the architects and consultants together so that the nuts and bolts would be done properly and the aesthetics would capture the feeling that we wanted to impart. One of the fun things we did as part of this process was put our designers on stretchers and push them through the department so they could see it from a patient’s perspective.” 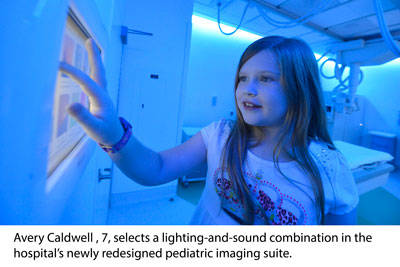 The radiology team presented a preliminary design to a patient advisory panel comprising members of the hospital’s standing patient- and family-centered care committees. “The hospital has a department that specifically engages with these committees,” Mitchell notes. “We just told them what we were doing, and they found us parents of pediatric patients who have had multiple imaging studies and who could offer good input about the redesign.” During formal meetings, the radiology team and patient advisory panel reviewed storyboards and discussed things like color schemes, furniture, and flooring. “We showed them our ideas for the lighting and the different activities and gathered their opinions about whether it was worthwhile or not,” Mitchell says. “Collecting patient input is really valuable because they often see things differently than we do.”

In addition to meeting with the advisory panel, the radiology team conducted informal surveys of patients in the imaging suite. “We talked to patients who come in quite often about their experiences – both good and bad – and how they would change the department for the future,” Mitchell says. James V. Rawson, MD, FACR, chair of the department of radiology and imaging in the Medical College of Georgia at Augusta University, stresses that such engagement is central to achieving patient-centered care. “If radiologists are going to be stewards of the patient experience, it is essential to include patients and families as part of the design team,” he explains. “The only way to improve the patient experience is to ask the patient and listen.”

At the children’s hospital, the process resulted in a redesign that uses technology throughout the imaging suite to calm patients. In the waiting lounge, for instance, the team included an interactive video wall where patients can participate in more than 80 virtual activities, like picking apples from a tree or popping balloons, using just their hands. “We wanted something that the kids could play with that would be durable and easy to clean,” Mitchell says. “The design team found this interactive video wall online, and we reached out to the company that makes them. Now, when the kids walk through the door, they run to that interactive wall instead of hiding behind their parents’ legs. It’s pretty cool to watch them instantly be comfortable.” 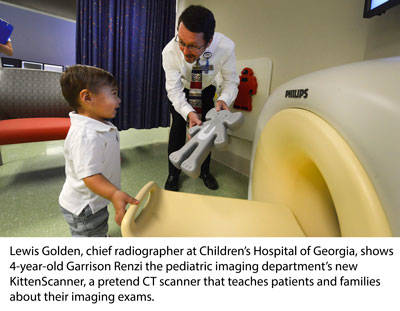 Away from the waiting lounge, the team installed a Philips KittenScanner , a pretend CT scanner that helps pediatric patients and their families understand their own exams better. Patients can select an elephant, crocodile, or other toy animal to put into the scanner, which reads the character’s computer chip and tells a story about the character’s condition. “The kids end up laughing, so when they go into the CT scanner themselves, they’re relaxed and they know exactly what’s going to happen,” Lewis says. The radiology team saw the power of the device just two hours after it was installed, when an autistic patient refused to cooperate for his exam. The technologist took the patient to the pretend scanner, and after scanning a couple of the characters, the patient willingly participated in his own CT, Mitchell says. “Right then, we realized the benefits of the scanner because we didn’t have to sedate the patient,” he notes. “It was really exciting.”

The team also designed smaller, more intimate waiting nooks, just outside of the exam rooms, where patients and their families can prepare for their exams. Each of these smaller waiting areas can be lighted with the patient’s favorite color. Patients can also choose a lighting color and a sound, such as jungle noises, to enliven the exam rooms. This gives patients a sense of control at a time when they may feel powerless and helps them relax during their exams. “We’re able to talk to the patients about their favorite color and just get them more engaged, so they’re not crying when they walk into the room,” Lewis says. “If they come into the room and they’re already comfortable, then they’re more likely to get into the positions that we need them to get into easily and will stay still for the scan. This reduces the need to have to repeat a study because of motion blur or other imaging issues and makes the entire process smoother for the patient, the technologist, and the radiologist.”

In addition to the technological aspects of the redesign, the team opted for white sinks and tables rather than stainless steel and incorporated comfortable furnishings for a homier feel. The project has had a significant impact on patients and families, generating positive comments about the pediatric imaging department on the hospital’s Press Ganey Satisfaction Survey for the first time. “The redesigned imaging suite helps patients and families focus on something other than their disease state or condition – it’s like a rainbow in the clouds,” Angalita says. “I especially appreciate that patients were involved in the design process; I can’t think of anything I would have done differently. They did an excellent job.” Henry agrees, saying that the dynamic space helps kids think, “This imaging procedure might not be so bad after all.”