A Rhode Island Interventional radiology group heeds the call to become a full-fledged clinical care practice.
Get a PDF version of this Case Study
Download
During an American College of Surgery meeting in 1968, the man known as the “Father of Interventional Radiology,” Charles T. Dotter, MD, warned that if radiologists didn’t begin to provide clinical care, they would eventually become nothing more than “high-priced plumbers.” Dotter suspected that if radiologists continued to simply read images and write reports rather than provide comprehensive clinical care, other physicians would eventually supplant them in the health-care industry. Since that meeting 45 years ago, Dotter’s quote has circulated extensively as his prediction has materialized and all radiology disciplines have slid toward commoditization. 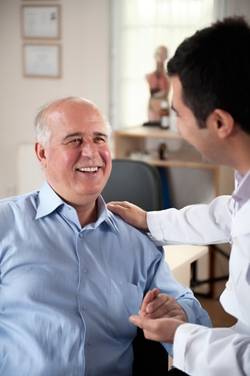 While many radiology practices continue to grapple with how to turn Dotter’s advice into reality, Rhode Island Vascular Institute (RIVI) in Providence has successfully transitioned from a traditional technical model in which radiologists rarely interact with patients into a mature clinical model — a cornerstone of ACR Imaging 3.0 — for the practice of interventional radiology. “Interventional radiologists got this clinical model gospel early on, so we realized that if there was to be a future for interventional radiology as an image-guided subspecialty, we were going to have to move further up the value chain,” says Gregory M. Soares, MD, director of RIVI, director of vascular and interventional radiology at Rhode Island Hospital, and associate professor in the Department of Diagnostic Imaging at Brown University’s Alpert Medical School. “We committed to taking referrals from both subspecialists and primary care physicians, instituting a covenant of taking care of patients, and establishing a patient-physician relationship, just like any other subspecialist.”

But RIVI’s interventional radiology department didn’t become a full-fledged clinical care practice overnight. Multiple steps were required to flesh out what it would mean to provide clinical care, get stakeholders on board with the idea, and reconcile the costs of radiologists seeing patients rather than reading images. The costs were of particular concern because seeing patients is reimbursed at a much lower rate than reading images. “We were required to put together business plans for almost everything we wanted to do at the beginning,” says Timothy P. Murphy, MD, full professor, research track, in diagnostic imaging at Brown University’s Alpert Medical School and director of the Vascular Research Center at Rhode Island Hospital. “It took many, many years of ongoing discussions, and probably for close to the first 10 years we received a lot of scrutiny from many stakeholders, including our parent board of directors, system administration, partners, and the referring community.”

One of the forerunners in clinical care, RIVI took initial steps toward implementing the model in the early 1990s. The transition began with a few RIVI interventional radiologists who believed that the future of interventional radiology, if not radiology as a whole, depended on not only performing procedures and reading images but also on following patients through episodes of care. “We understood that if we wanted to be the people who continued to do these image-guided techniques and not just the guys who innovated and developed the procedures, we needed to be on the same playing field as our clinical colleagues,” Soares says. “And the only way to do that was to have a robust clinical practice.”

Soares, Murphy, and other supporters of the clinical model began this evolutionary process by developing a general business plan that outlined how the clinical model would work and the benefits it would bring, including improved patient care and increased business over the long term. They then had to convince all of the stakeholders that the practice should pursue the approach — beginning with their fellow interventional radiologists. Soares says some of his colleagues were averse to the clinical care model because it requires a great deal more work than sitting in a room and reading images. “Instead of getting a call about a patient who needs an angiogram, you’re getting a call about a patient who has pain in his legs, and you’re going to have to manage the disease and follow the patient through that episode of care,” he says. “It’s a different way of approaching your involvement with the patient.”

Once the interventional radiologists were agreeable, the team talked to referring physicians and found that most of the subspecialists embraced the more clinical approach, because they were not always comfortable assessing patients for unfamiliar complications following interventional radiology procedures, Murphy says. Vascular surgeons were the only subspecialists resistant to the transition, and that’s because they preferred being the intermediary in referrals from primary care physicians, Soares notes. “Once you make the shift and you start becoming a two-way hub for referrals instead of just the technical guy, then all of a sudden you are in a place where you’re on the level playing field with the clinicians,” he says. 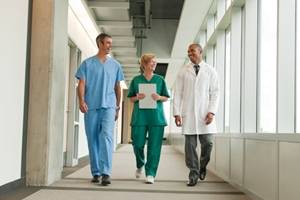 The final, and perhaps most important, stakeholder group the team had to convince was RIVI’s leadership. The team presented its board with a detailed business and financial plan that included the addition of minimally invasive varicose vein procedures — which were not widely offered in the market at the time — as a way to supplement the low reimbursement for clinical work. “If you did one or two of these major varicose vein procedures, like a laser ablation of a varicose vein, then you could generate a significant amount of revenue, so that you could spend the rest of the day seeing patients clinically in consultation,” says Soares, whose area of subspecialty is venous disease. “It was a low-hanging fruit for the practice.”

RIVI’s interventional radiologists began seeing patients on a clinical basis in 1993 in a small recovery room next to their procedure room in Rhode Island Hospital. In 1996, they moved their consultations into a dedicated exam room next to the recovery room. But that quickly became untenable due to space restrictions so in 2001 they began leasing space for a half-day a week in a shared medical office building where they provided consultations and kept records. The following year, RIVI’s interventional radiology group incorporated with the state to officially form RIVI.

As its number of follow-up patients increased and its clinical office also became the site of ambulatory procedures, RIVI moved from one larger space to the next until 2004, when it finally moved to a freestanding building that it shares with an ophthalmology practice. Following multiple expansions, RIVI now has an 8,000 square foot office within that building. The space looks like any other subspecialty office and includes a waiting area and check-in desk, four exam rooms, two fluoroscopy rooms, and an ultrasound room, as well as a medical records library and physicians’ offices. “In that office we see about 600 patients a month, and the office is completely self-sustaining in terms of the expenses,” Murphy says. “In fact, it’s a profit center for the larger radiology practice.”

Even though some practices may be unable to follow RIVI’s strategy for clinical care, it is imperative that everyone finds some way to become more clinical, Soares says. “Radiology is in a really scary place with all of the threats of commoditization,” he says. “Radiologists have to look at this and think to themselves, ‘How am I going to avoid being a commodity?’” Soares says one answer may be to devote at least part of a practice, such as interventional radiology or mammography, to clinical care as a way to remain relevant to the hospital systems. “As hospital systems develop, the practices that are going to survive are those that offer added value to their hospitals,” he says. “The starting point has to be your interaction with the patient; by taking ownership of that interaction, you’re no longer an invisible provider of some report that’s going to help someone else take care of the patient. You are involved in the patient’s care like any other physician.”